Aerogard was first developed in 1963 by a CSIRO employee who wanted to make Queen Elizabeth’s visit to Australia more pleasant. She was sprayed with it at a Government House function, and word about the repellent – which was yet to be named Aerogard – began to spread.

Now, Aerogard’s name is synonymous with bug and insect repellent across Australia, and it’s easy to see why when you look at the number of products it has. Aerogard’s numerous repellents can be separated into three different categories which we’ll review in this article.

If you’re looking at buying some insect repellent but aren’t sure which one you should get, hopefully our review of Aerogard insect repellents will help you determine if it’s the right brand for you. We will look at the price, features and strength of each different category to offer a little guidance. 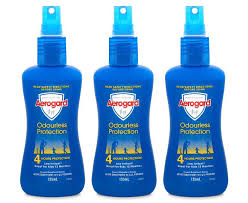 Aerogard’s odourless protection range provides low levels of skin irritation and can be used by anyone over the age of 12 months old.

Lasting for up to four hours, the odourless range repels mosquitos, march flies and sandflies, which are the three most common annoying insects that people have problems with, providing efficient protection to you and your family and friends.

It is suitable for people of all ages, with the exception of babies under the age of 12 months. It has a fragrance free formula which gives a neutral smell, so you won’t be wrinkling your nose at it while it’s on your skin.

The odourless range is also non-greasy and low irritant, which makes it easy to wear and perfect for those with sensitive skin. These products are fairly basic, and that is much as they offer in terms of features.

In most reputable stores, Aerogard’s odourless repellent range is very cheap. The smaller ones will set you back a measly $6, and the larger bottles such as the 300g spray usually won’t cost more than $10. 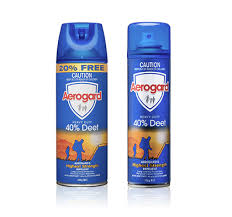 The heavy duty repellent line from Aerogard has a 40% DEET concentration, which is a powerful component commonly used in a lot of insect repellents. This is a high amount, and makes it Aerogard’s strongest repellent range as a result.

The Heavy Duty range lasts for up to six hours, thanks to its higher concentration of the DEET chemical. This gives you longer lasting relief from flies, march flies, sandflies, ticks and other irritating biting insects.

This range of insect repellent is particularly effective at protecting you from insect-borne diseases, such as Ross river fever and dengue fever, but apart from that, there are no other notable features to discuss.

There are two different sizes that Aerogard’s heavy duty range comes in:

Both of these choices come with 40% DEET levels, making them extremely effective at repelling flying nuisances.

Aerogard’s heavy duty Aerosol range is much more expensive than its odourless options. The 150g spray bottle will cost about $13, and the 300g option could cost up to a pricy $19. 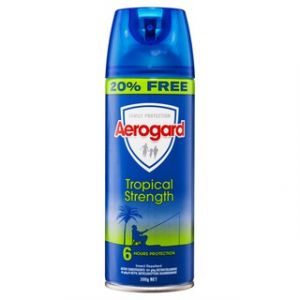 The last category of Aerogard to discuss is the Tropical Strength range, which is very hard to distinguish from the heavy duty range, as you’ll soon see.

Like the heavy duty options listed above, this range of insect repellent is extremely basic. It lasts for six hours and provides protection against diseases transmitted by insects, but it doesn’t really do much else of note.

There is more variety in the tropical strength range, with five options to choose from:

So depending on your needs, like how many people will be using it, there are plenty of choices available to you.

Although the price does seem to vary significantly depending on where you buy it from, prices seem to consistently lie between $6 and $10.

As one of the leading providers of insect repellent in the country (and one of the biggest names), Aerogard is available at pretty much any chemist and supermarket chain. A better question would be who doesn’t sell insect repellent?