There’s no shortage of football fans here in Australia, but while we might not always agree on how the ball should be handled, we can all agree that it makes for good TV! But for those who are fans of the way football is traditionally played (i.e. the proper way), where can you catch the local action of the A-League? Find out in this Canstar Blue guide. 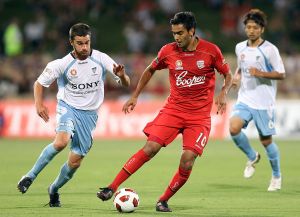 To watch the A-League, you can stream live or on-demand via Paramount+, or tune into Channel 10 for free-to-air broadcasts.

In a recent broadcast deal which has shaken up the dynamic of the A-League, ViacomCBS has taken over the A-League. This means that Fox Sports will not longer have broadcasting rights, and two new contenders will be streaming Australia’s footballing league – the first of which is Channel 10. Football fans will be able to catch at least one 7:30pm Saturday night game on Channel 10, as well as one W-League game being broadcast on 10 Bold every Sunday. Games will also be streamed on 10 Play for those who can’t catch the game live, with match highlights also available.

When does the A-League season start?

Love your football? Kayo has plenty of other football leagues and competitions available, so why not check it out before kick off? Click ‘go to site’ for more details.