Baseball might be America’s pastime, but the sport is becoming an increasingly popular one in Australia, thanks in part to the Australian Baseball League (ABL). If your local diamond isn’t enough to satisfy your baseball needs, the MLB (Major League Baseball) is where the serious swinging action is at. But where exactly should you be tuning in? Canstar Blue looks at how you can watch Major League Baseball Down Under – and what it will cost you.

How to watch MLB in Australia

To watch Major League Baseball action in Australia, you can tune in via Kayo, Foxtel and through MLB.TV, with each offering multiple games per round, as well as Playoff action later in the season.

Covering four regular season games per week (including live coverage and replays), Kayo additionally offers Aussie baseball fans the post-season and the World Series as part of its coverage. Also included is the MLB Strike Zone, which gives viewers an in-depth guide to the scores, stats and highlights, allowing those who can’t fit in the whole nine innings a chance to still catch the big moments, or help those new to the sport find their feet. 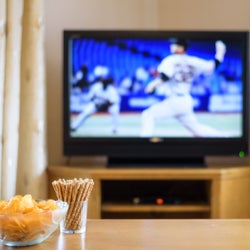 As part of Foxtel’s sports package, you’ll receive multiple ESPN channels, meaning you’ll be able to catch a number of regular MLB games, as well as the postseason matches. Last year, Aussie baseball fans were treated to five MLB games per round, with the same number expected for the 2021 season, in addition to a variety of talk-show programs to ensure you’re kept up to date with the latest.

A subscription-based service, MLB.TV offers two tiers for baseball fans to choose from – the ‘Single Team’ option, where you choose your favourite team and follow all of their matches, or the ‘All Teams’ subscription, which gives you access to all matches of the regular season. Both subscription options offer live and on-demand broadcasts, with MLB.TV coming with a 7-day free trial.

How to watch the MLB Playoffs

The Playoffs, and the World Series, is an exciting time for both diehard and casual fans, with the best of seven games giving fans plenty to cheer and cry about. There is currently no schedule or dates planned for the 2021 Playoffs, but fans can expect dates to be released once the season kicks off.