With increasing diversity within both the mobile phone and laptop markets, it can be a gruelling decision to find something that really suits your needs, especially as it can turn into a bit of an investment. With the added option of tablets now well and truly cemented, the decision initially looks to have been made harder.

On closer inspection however, the tablet itself looks to be a worthwhile option for many, finding the middle ground between the laptop and the mobile, giving consumers ease of use without the bulk. A perfect device to keep the kids entertained while also keeping on top of work deadlines, the simple tablet has worked its way into many households.

One of the heavyweights of the tablet market, Apple, has released its flagship model almost yearly since 2010, with its focus on personal electronics paving the way for quality products. Check out some of the products on offer below.

One of the main focuses of the company, the iPad is arguably what most people imagine when they think of tablets. With models produced for different markets and consumer types, Apple has made its presence felt within the market. 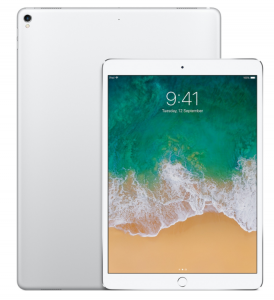 The top of the line model, the iPad Pro series contains the latest and greatest that Apple has to offer. Available with a 10.5 or 12.9inch display, the iPad Pro delivers a 120Hz refresh rate, meaning that videos and games are smooth and instantaneous, making sure you don’t miss a thing. Apple also boasts a 30% improvement on CPU speed from the previous iPad model, as well as a 40% improvement on graphics speeds, catering for entertainment-heavy users.

The base model of the Pro also comes with 64GB of memory, which can be upgraded to 512GB if needed, with all Pro models coming with a 12MP camera with a number of photo extras, helping capturing every moment. While it has a number of features to suit each activity and situation, the most basic model will still set you back around $1000, with the most expensive closer to $2000, so there are definitely cheaper options on the market if you’re price conscious.

Apple’s primary model, the iPad, has been engineered for the masses since its introduction to the market, with the latest model now coming with a 9.7inch display and powerful processing tools. Suitable for all sorts of entertainment, the iPad comes in 32GB and 128GB models, with the 8MP camera able to shoot in 1080p quality.

The iPad is also available with Wi-Fi and Cellular technologies, handy for those constantly on the go, with the iPad also lightweight for easy portability. Being the cheapest model within the Apple line-up, it is best suited for household use, particularly those with children.

Physically the smallest of Apple’s tablet range, the iPad Mini stills boasts a 7.9inch display, enough to produce the same resolution as the iPad, meaning you won’t lose video quality if you decide against the iPad. In addition to the same resolution, the Mini offers a lot of similar features to the iPad, including memory, camera quality and features and general functionality. It does however, have a slightly less powerful processing unit, but for its size, it can still roll with the best of them.

Price wise, the Mini is more expensive than the iPad, but may prove worthwhile for those who are after a smaller, and more portable, unit.

Is an Apple Tablet Worth the Money?

If you’re in the market for a tablet, it would be hard to ignore the iPad. While its range may be limited, Apple does provide enough options and extras for consumers to seemingly find one built for them or their families, making it a product that may prove hard to resist. However, as with most electronics, it will come down to personal preference, with the feel of the tablet, its functionality and its durability on the go all factors to be considered. It’s best to do your own research, especially when the market is so diverse. While Apple may be a safe bet, you might find a better option elsewhere.