As many of us know, having a quality and reliable blender is important, especially if you’re fanatic about your morning smoothie or fancy yourself a whiz in the kitchen. It’s also a super versatile gadget that can be used for a variety of tasks including making milkshakes, cocktails (hello margarita!), cake batter, baby food, sauces, soups, quick bread, gluten-free pizza crust, pudding, sorbet, and the list goes on. You get it.

If you’re in the market for a new blender, you’ve no doubt heard about the NutriBullet and the Ninja. Both are premium options in the market, but which is better? In this battle of the blenders, we review both brands on price, features, and blending performance. 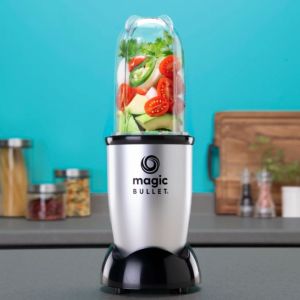 NutriBullet is the original nutrition extractor blender. Its range is all about simplistic efficiency throughout, with each model designed to be super convenient to use and to preserve essential vitamins and nutrients from fruits and vegetables often lost during the blending process. Besides its extensive range of full-sized blenders, NutriBullet is best known for its compact blenders that pack a mean punch. The line-up also includes a smart blender and is competitively priced within the market.

The NutriBullet blenders range includes (but is not limited to) the following models: 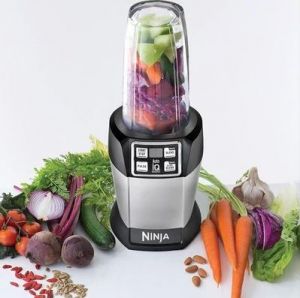 Aside from being a person trained in ancient Japanese martial arts, ‘Ninja’ is also a popular and premium kitchen appliances brand. It also deals in nutrition extractor blenders but the few models in the range are more heavy-duty, larger in size, and therefore, more expensive. There’s also a model with smart programs and a food processor.

NutriBullet vs Ninja: Which is more powerful?

NutriBullet blenders are more powerful in terms of wattage but not necessarily in blending performance (see more below). The most powerful NutriBullet blender is the Smart Touch Blender Combo which comes with a 1,500W motor base to easily blend tough ingredients, like frozen fruits or stone fruits without putting pressure on the blades or causing the appliance to overheat. Meanwhile, Ninja’s most powerful model is the Foodi Power Nutri Duo with a peak of 1,200W, which is still enough to achieve smooth results, especially with tailored settings for specific recipes like a red pasta sauce or dip.

NutriBullet vs Ninja: Which has the best blending performance? 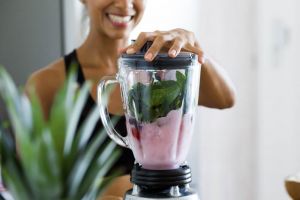 If online reviews are anything to go by, Ninja blenders outperform NutriBullet blenders in blending performance and do a better job at evenly blending produce, nuts, seeds, and ice. Ninja blenders are also said to give a smoother consistency to your end product without chunks or fibrous residue. This is especially important if you’re using a blender for something other than smoothies like soups or making baby food. Do however keep in mind that NutriBullet blenders were originally designed to make juices and smoothies, and some of its single-serve blenders can only blend ice if there’s liquid in the jug and can’t be used to make soups.

NutriBullet vs Ninja: Which has the most features?

It’s a tie − both NutriBullet and Ninja blenders come with similar features for making smoothies, as well as single-serve and double-serve twist cups and seal lids − although Ninja blenders are more heavy-duty (can blend tougher ingredients better) and do offer more tailored settings to blend a wider variety of ingredients and larger quantities. Some Ninja blenders also have pre-timed and Auto-iQ intelligent programs for pulsing, blending, and pausing patterns.

NutriBullet vs Ninja: Which is cheaper?

NutriBullet blenders are cheaper than Ninja blenders, which is a big part of why they’re a cult favourite for the average consumer − prices start from just $49.95 for a compact blender, with most models priced under $200. However, the starting price point for a Ninja blender is $159.99 and the majority of models are priced over $250. Both brands offer a one-year warranty on blenders.

Here is a quick comparison of comparable NutriBullet vs Ninja models, based on power capacity, features, and price.

NutriBullet vs Ninja: Which do Aussies rate best?

Ninja was rated best for overall satisfaction in Canstar Blue’s blender review, on several occasions. Aussies often rate it highly for performance and additional functions. However, NutriBullet is typically the top brand for ease of use and value for money. Kambrook is another brand of blenders consumers love and may be worth checking out if you’re in the market for a new model.

Here are some pros and cons to consider for NutriBullet blenders.

Here are some pros and cons to consider for Ninja blenders.

NutriBullet vs Ninja: Which should you buy?

If you’ve got cash to splash and enough storage space in your kitchen then a Ninja blender may be a solid investment, especially if you’re planning on using your blender for various recipes and baby food. Ninja blenders also offer more features and a better blending performance overall. However, if you’re looking for simplistic efficiency, a compact design, and affordability, then a NutriBullet blender is your go-to. NutriBullet also has a wider range of models on offer to cater to most households.

*Prices taken from respective retailers, correct as of February 2022.