Show Important Notes^* Hide Important Notes^*
* Overall satisfaction is an individual rating and not a combined total of all ratings. By default, brands with equal overall satisfaction ratings are sorted by the mean overall satisfaction score as rated by consumers. You can click the arrows at the top of any column in the table to sort by the results in that column.
^ By clicking on a brand or ‘details’ button, you will leave Canstar Blue and be taken to our referral partner to compare. You agree that Canstar Blue’s terms and conditions apply to this referral. If you click on a brand that our referral partner does not cover, you will be taken to a brand page on Canstar Blue.
Canstar Blue research finalised and published in April 2022. 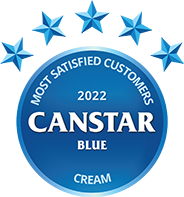 A scone isn’t a scone without both jam and cream, and soup is rarely as tasty as it is when it’s creamy. It’s no wonder one in three Aussies (34%) pick up a tub of cream as part of their regular grocery shop, even if a similar portion of those surveyed only eat cream on special occasions (29%).

To find out which cream adds the perfect bite, we asked more than 1,000 shoppers for their feedback on the cooking and baking cream(s) they purchased and consumed in the last three months. Respondents scored brands on taste, texture and consistency, range variety, packaging design, value for money, and overall satisfaction. Those that met the minimum sample size (30 responses) are rated and compared.

In our first-ever cream ratings, Woolworth and Bulla shared a sweet win after both received five-star reviews in several research categories – including overall satisfaction!

Here are the best brands of cream in Australia, as rated by consumers in Canstar Blue’s inaugural review:

Pura and Dairy farmers stirred the pot after both rated five stars for packaging design and texture, with Pura additionally scoring full marks for taste.

Woolworths has several types of creams to add to your shopping list, including canned thickened cream, whipped cream, and sour cream. These are usually available in 300ml or 600ml tubs, except for whipped cream which comes in 250g cans. Products can cost between $2 and $4, and include:

Woolworths cleaned up with five-star reviews for taste, texture & consistency, value for money, and overall satisfaction. It whipped up four stars for variety and packaging design.

Bulla has a variety of creams to scoop up, including cooking creams, crème fraiche, dollop creams, thickened creams, and sour creams. If you’re having trouble adding curries, pasta sauces, and casseroles, the brand’s cooking cream is said to quickly thicken and heat up without curdling or splitting. For those wanting something decadent to pair with their dessert, Bulla says its double cream is the thickest Bulla cream on the market. Products are usually available in 200ml, 300ml, and 600ml packaging, including:

In addition to rating best for variety, Bulla also impressed after receiving full marks for taste, texture, and overall satisfaction. It got four stars for packaging design and value for money.

What’s the difference between cooking cream and whipping cream?

Cooking cream doesn’t contain as much milk fat as whipping cream, so it will usually stay in its liquid state longer and won’t become as thick as other types of cream when whipped – even if chilled. It also has a thinner consistency that makes it easy to stir into soups and stews, and is less likely to curdle or split when heated or reaching boiling point.

Canstar Blue surveyed more than 3,000 Australian adults across a range of categories to measure and track customer satisfaction, via ISO 26362 accredited research panels managed by Qualtrics. The outcomes reported are the results from customers within the survey group who have purchased (from a supermarket or grocer) and eaten cream (note: this may include regular cream, as well as whipped cream) within the last three months – in this case, 1,089 people. 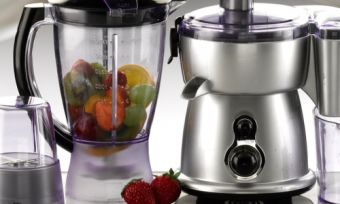 Top 10 Thermomix alternatives you can buy

If you want a Thermomix, you know you’ll have to pay through the nose. Top-of-the-line models retail for upwards of $2,000 and frankly not everyone can afford this luxury.

Now, if you’ve been living under a … 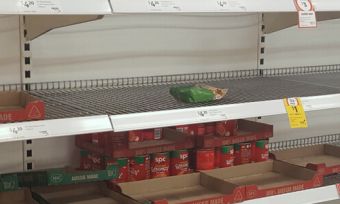 Are your local supermarket’s shelves bare? Here’s why

There is a reason your local supermarket is looking a little bare and this time it has nothing to do with toilet paper hoarding. 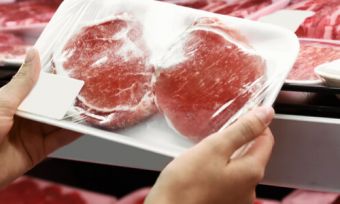 How much should you spend on meat at the supermarket?

It’s no secret that trimming the fat on your grocery bill goes a long way to beef up your savings. While meat can make up a large chunk of your supermarket spend, you don’t need …

Oven Temperatures You Should Use to Cook Your Food

What oven temperature should you use to cook fish? Or cupcakes? We run through the ideal cooking temperatures for various food types.