Mobile broadband is a great thing if you’re on the go, or don’t have NBN available where you live. If you’re working from home, travelling often, or need to use the internet a lot for your job, it’s great to have mobile broadband as even a backup in the bottom of a drawer or bag.

In particular, if the whole family is home and using the internet, you’ll want an alternative if your bandwidth is being soaked up by everyone else in the house. Mobile broadband is a solution to this problem, and it could prove to be a painless backup plan for you.

Mobile broadband is a type of internet connection that, while not as hard-hitting and download intensive as a Standard Plus 50 NBN Plan or a Premium 100 NBN plan, is still great to have with you, if you need to remain online no matter what. It’s great if you’re a traveller and need a constant internet connection, or if the home internet goes down and you need to get online right then and there.

Rather than taking advantage of internet lines to houses and properties, mobile broadband relies on 4G or 5G mobile coverage. Telstra, Optus and Vodafone all have mobile coverage across Australia.

This means that 4G mobile broadband operates at similar speeds to mobile phones, typically at speeds higher than the 12Mbps limit found on basic NBN plans, and with a maximum of about 100Mbps. It also means that if home broadband connections are getting choked up by bandwidth constraints, like they are with COVID-19 traffic, this makes a brilliant alternative if your home internet is too slow.

How much does Optus mobile broadband cost?

Optus Mobile Broadband plans start at just $15 for a 5GB per month plan and range to $50 a month for 75GB, with all plans including an optional modem. These plans are great for anybody wanting a data-only SIM as a backup to their home internet, or for internet on the go.

With 20GB of bonus data per month available for 24 months, and access to Optus Sport, it’s a hard deal to pass up on when searching for a mobile broadband plan.

As for other brands, mobile broadband prices range between $15 a month for a small data plan to $110 a month for a huge data plan. There aren’t any unlimited plans on the market right now, which means the price is largely dependent upon the packaged-in technology and the size of the data plan itself, ranging between 7GB and 250GB. Plans range between being month-to-month, and having 12 month plan lock-in periods.

To get a good idea of the prices of mobile broadband prices from different providers, we’ve included this table below for your consideration.

Optus also offers prepaid mobile broadband plans starting at $2 for a Data Only SIM Starter Kit. If you’re interested in paying before using your data, it might be worth jumping on these. For a $30 recharge you can get 15GB worth of data with an expiry within 30 days. 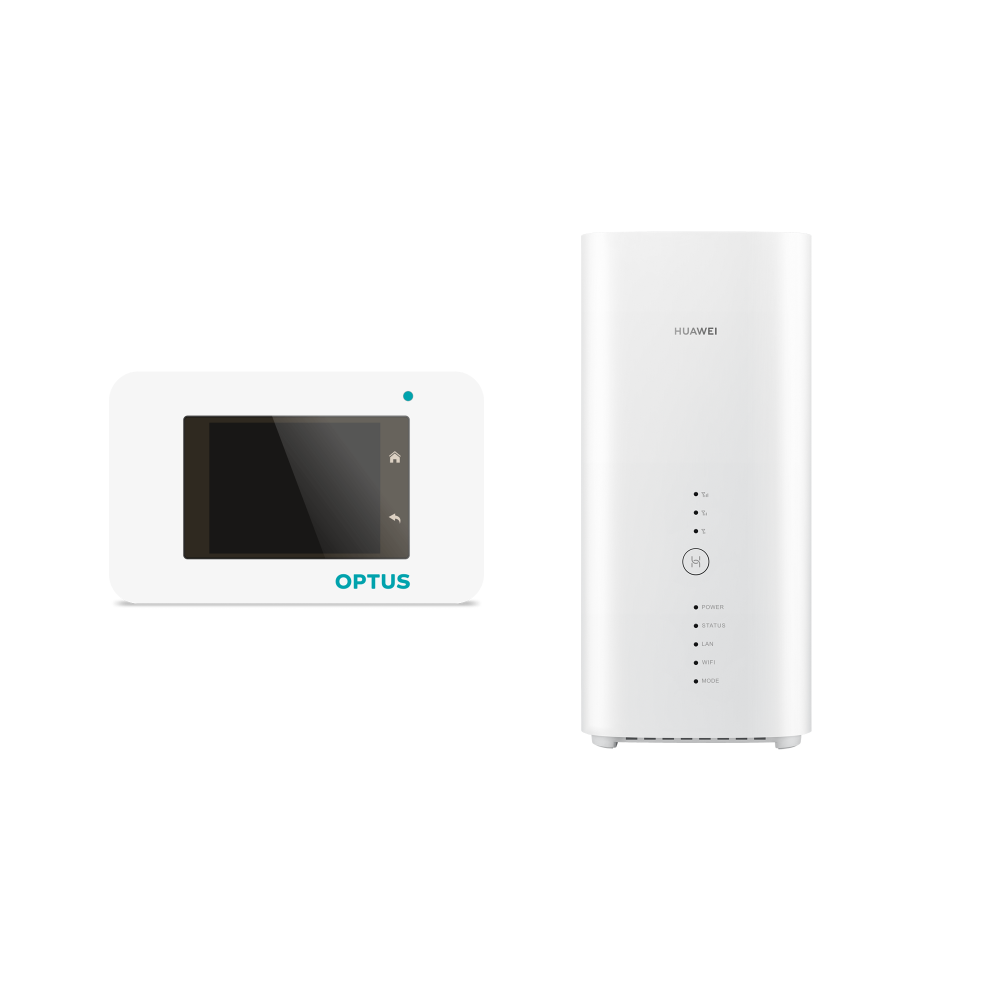 Both devices can take a data-only Micro SIM, but the B818 4G WiFI Modem has access to multiple 4G signal bands, meaning it’s better for multiple devices and users – this goes against the AC800S 4G WiFi Modem being better at portable internet usage.

Both of these modems start at $65 per month (on 24 month plans), both requiring a 200GB or a 500GB home wireless plan to be included with the purchase.

How fast is Optus mobile broadband?

Typically, you should be able to reach download speeds of between 20Mbps and 100Mbps on a 4G connection, but faster download speeds of up to 1Gbps are now possible if you live in an area with 5G network coverage and have a compatible device.

However, there are speed differences between devices and networks. We’ve done a great deep-dive article on that here.

Why should I switch to Optus mobile broadband?

Mobile broadband is a great option for you for several reasons. It’s a great alternative to the NBN when the network is under a lot of stress, such as within the COVID-19 pandemic, and it’s also great for if you’re out and about and need a reliable internet connection. Having a separate internet connection at home could also be a great idea if you’re looking to stop bandwidth congestion for your family. If your family is watching something on Netflix and you’re trying to do a video call with your workplace, you’ll certainly notice some bandwidth tension, so maybe it’s worth thinking about mobile broadband.

If you don’t have the NBN available in your area, mobile broadband is something you should certainly consider. Mobile broadband speeds will typically idle around the Basic NBN 12 speed, which rivals the max speed of ADSL connections.