Samsung’s Galaxy S22, Galaxy S22+ and Galaxy S22 Ultra are now available to pre-order, with each device shipping and arriving in stores from March 4, 2022. But these top-of-the-line smartphones aren’t exactly cheap, with outright prices ranging anywhere from $1,249 to $2,449 depending on your choice of model and storage size.

Although you have the option of spreading the cost across 12, 24, or 36 months of payments on plans from major telcos (and from Samsung directly), it’s still a serious financial commitment for many Australians. Fortunately, there is a way to potentially save hundreds on the price of the new Samsung Galaxy S22.

If you’re looking to upgrade from your current device, Telstra, Optus, Vodafone, Woolworths Mobile and Samsung each offer trade-in credit for selected smartphones. How much you can save will vary across each brand, and will depend on the make and condition of your old phone — so to help you find the best Samsung Galaxy S22 deal, we’re comparing the hottest phone trade-in offers from each provider.

Telstra’s trade-in service is operated by Kingfisher, with the telco listing up to $1,000 in credit available for unwanted devices. However, you’ll need to have an eligible phone to take advantage of the deal: currently, only selected models from Apple, Samsung, and Google are accepted.

The $975 trade-in for the undamaged iPhone 12 Pro Max is the highest value estimate we were able to find. Using this figure, you could purchase the standard 128GB Samsung Galaxy S22 from Telstra for just $274 once your trade-in credit is applied.

To trade in a device with Telstra, you’ll need to create or use your Telstra ID and sign in to Telstra’s My Telstra online portal. Navigate to the Services tab, select your account, then scroll down to ‘Trade in your old device’  and follow the prompts. If your old handset is accepted for trade-in, you’ll receive the value as a Telstra bill credit (or paid to your nominated bank account or credit/debit card).

The following table shows a selection of published 24-month Telstra plans for the 128GB Samsung Galaxy S22 on Canstar Blue’s database, listed in order of cost, from the lowest to highest and then by data allowance, largest to smallest. Use our mobile phone comparison tool to see plans from a range of providers. This is a selection of products with links to referral partners.

Vodafone is coming in hot with an offer for Galaxy S22 buyers: trade in your old phone and save up to $1,320 on your phone cost. The telco is throwing in $600 in bonus credit for customers who pre-order any of the three new Galaxy models, trade in an eligible device, and stay connected to a Vodafone SIM plan for 12, 24 or 36 months.

To claim your $600 bonus trade-in credit, you’ll need to order your Galaxy S22 by March 24, 2022, and trade in your old device by March 31. The value of your trade-in phone will be applied as a bill credit over your 12, 24 or 36-month device payment plan, but if you cancel your Vodafone service early you will forfeit the remaining credit balance.

Vodafone’s $1,320 figure is based on the estimated $720 trade-in value of the 512GB Samsung Galaxy S21 Ultra in good working order, alongside the $600 bonus. However, Vodafone accepts a range of trade-in devices from Samsung, Apple, Google, OPPO and Huawei.

The following table shows a selection of published 24-month Vodafone plans for the 128GB Samsung Galaxy S22 as published on Canstar Blue’s database, listed in order of their standard monthly cost, from the lowest to highest and then by data allowance, largest to smallest. Use our phone plan comparison tool to compare plans from a range of providers. This is a selection of products with links to a referral partner. 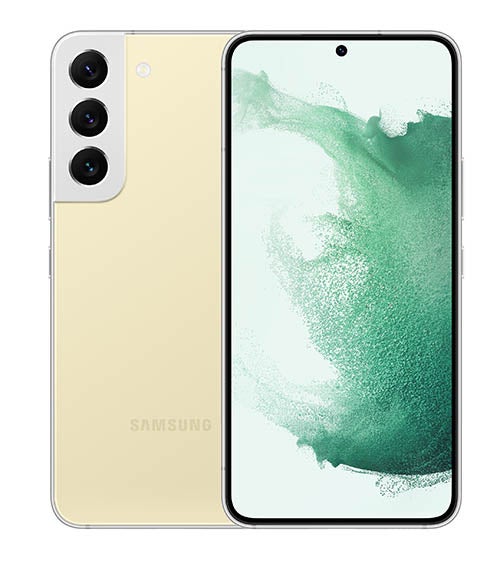 While there’s no Galaxy S22-specific trade-in deals available from Optus, the telco still offers account credit for handing in selected smartphones. Optus customers can trade in a range of devices from Apple, Samsung, OPPO, Google, Huawei, Motorola and Realme, including newer devices such as the iPhone 13 series.

With $1,140 the maximum amount of trade-in value we could confirm, this means you could take home the newest Samsung Galaxy S22 for as little as $109 on an Optus plan. But again, this figure applies to the credit offered for the most expensive and newest iPhone 13 model only.

Like Telstra, Optus will apply your credit to your monthly phone bill once your trade-in is confirmed. If you’re buying the S22 on a 12, 24 or 36-month device plan, credit amounts will be applied equally across your one, two or three years of device payments.

The following table shows a selection of published 24-month Optus plans for the 128GB Samsung Galaxy S22 on Canstar Blue’s database, listed in order of cost, from the lowest to highest and then by data allowance, largest to smallest. Use our mobile phone comparison tool to see plans from a range of providers. This is a selection of products with links to referral partners.

Rather than apply trade-in credit directly to a customer’s bill or account, Woolworths Mobile instead offers Woolworths Wish eGift cards to customers trading in older devices. However, if you do want to pair Woolworths Mobile’s lower-priced postpaid mobile plans with the new Samsung Galaxy S22, trading in your current phone with the supermarket-branded telco will give you credit to use at a range of stores including Woolworths, Big W, BWS and Dan Murphy’s.

Woolworths Mobile requires customers to enter their device’s IMEI number to estimate trade-in value, so examples are a little harder to come by. We received a quote of $580 for a 128GB iPhone 12 in good working order, but only $105 for a 64GB iPhone 8.

The following table shows a selection of published 24-month Woolworths Mobile plans for the 128GB Samsung Galaxy S22 as published on Canstar Blue’s database, listed in order of their standard monthly cost, from the lowest to highest and then by data allowance, largest to smallest. Use our phone plan comparison tool to compare plans from a range of providers. This is a selection of products with links to a referral partner.

Which telco has the best Samsung Galaxy S22 trade-in deal?

The amount of credit you can claim for your unwanted phone will depend on:

Keep in mind that even if a telco has a better trade-in offer for your old device, they may not offer the best mobile plan for you when it comes to features and price. Saving an extra $100 on the initial price of the Samsung Galaxy S22 may not be worth it, if you’re signed up to a plan that costs $10 more per month than what’s on offer from competitors.

Below is a comparison of the maximum current trade-in value of several popular smartphones across Telstra, Optus and Vodafone, when traded in for any new Samsung Galaxy S22 model. These prices are a guide only and may be subject to change; check provider websites for a more accurate quote for your current device. Vodafone prices do not include the $600 trade-in bonus currently available on Samsung Galaxy S22 plans.

If you prefer to buy directly from Samsung, the manufacturer also offers customers trade-in discounts for a range of unwanted older devices, including models from Apple, Samsung, Google, OPPO and Huawei.

If you do want to buy from Samsung, you can also trade in up to two eligible devices at one time, meaning an even bigger saving on your new Galaxy smartphone. These offers are only available in Samsung retail stores and the Samsung Online store.