The 2000 Sydney Olympic Games had an impact on Australian sport unlike any other, with Cathy Freeman at the forefront of women’s sport for a generation to come. But the best is yet to come for Australia, as 2023 will see the best of women’s football coming to Australian and New Zealand shores.

While the competition kicks off across the pond on July 20, 2023, the final will take place in Sydney. With 32 countries competing for top spot in football’s most prestigious tournament, the Matildas and the Ferns will have a lot of pressure on their shoulders.

What’s more – every match will be live and on-demand on Optus Sport.

“We are delighted to not only support the most exciting women’s sporting event in the world, hosted right here on our home soil, but also to demonstrate our unwavering commitment to growing women’s sport in this country”, says Optus Chief Executive, Kelly Bayer Rosmarin.

Optus Sport has been a pioneer in women’s sport broadcasting, with the service streaming the 2019 FIFA Women’s World Cup, with the 2022 Women’s Euros also falling under the streaming service’s umbrella of sport coverage.

Optus Vice President of TV, Content and Product Development Clive Dickens reinforces that this is a huge opportunity for not only fans of the sport, but the sport itself.

What Women’s World Cup content will be streamed on Optus Sport?

With 64 matches taking place in the tournament, you can find 64 matches streamed live and on-demand with Optus Sport. In addition to this, shows detailing everything you need to know about each fixture will be broadcast and produced by Optus Sport, with free content also slated to be available for fans. More information on these programs will be released closer to the event.

When will the 2023 Women’s World Cup be played?

The 2023 Women’s World Cup will be played from July 20, 2023 to August 20, 2023, with eight groups of four countries competing in a knockout tournament, before competing in a traditional finals bracket.

Where will the 2023 Women’s World Cup be played? 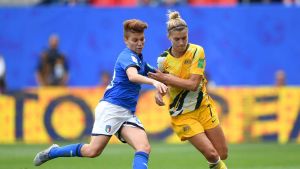 Optus Sport offers live and on-demand coverage of all the Women’s World Cup action, along with preview and review content to enjoy between matches. Optus Sport is available as an optional extra on eligible Optus plans for no extra cost, but non-Optus customers, and Optus customers who don’t have an eligible plan, can still sign up to Optus Sport, which will set you back under $15 per month.

Many postpaid phone plans are available with Optus Sport included, both bundled ones and SIM only plans. For free access to Optus Sport, you can choose between the 445, $55, $65 or $85 postpaid plans.

However, for those looking for a new phone, Optus has quite competitive iPhone 12 deals, which include a lot more for the price you pay. Plans are separate to your device payments, which can be over 12, 24 or 36 months. iPhone 12 64GB plans with Optus Sport included start at $45 per month plus $34.68 for the phone repayment, totalling $79.68 a month over a 36-month payment period.