The drive along the Australian Pacific Coast, between Brisbane and Sydney, is the stuff of legend. While the Pacific Highway is approximately 900kms long between the two state capitals, most seasoned roadtrippers recommend taking a bit longer to get there, with plenty of sights, attractions and towns to visit along the way.

If you’re planning a Pacific Coast roadtrip, we’ve highlighted some must-stops and detours along the way.

Best places to stop between Brisbane and Sydney

While there’s plenty to see and do between Brisbane and Sydney, here are our top picks for your next road trip: 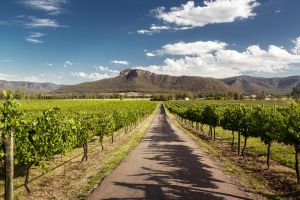 If you’re the tour type (and with wine tasting involved who wouldn’t be), you might be interested in a gourmet food and wine tour through the famed Hunter Valley region. There’s a number of tours to choose from, whether you’d prefer to pop in for a quick one hour ‘Bubbles & Nougat’ experience or splash out on a full day food and wine lovers tour. There’s guaranteed to be something for even the most untrained palate. 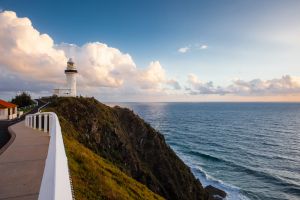 The fully functioning Cape Byron Lighthouse is iconic for a few reasons – it’s the most powerful lighthouse in the country, and also marks the easternmost point of mainland Australia. The lighthouse is located about three kilometres northeast of the Byron Bay town, a bustling backpacker hub which is worth the stopover alone. 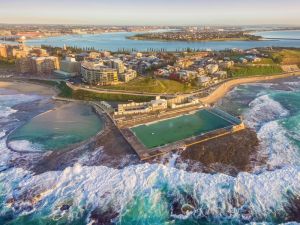 The Newcastle Ocean Baths, and the adjacent heritage listed art deco pavilion built in the early 1900s, are worth the visit. They are open all year round, however if they are closed due to cleaning or maintenance, the nearby Merewether Ocean Baths will more than hit the spot! 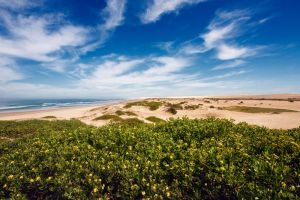 Located on Worimi Conservation Lands, the stunning 32 kilometre stretch of sand forms the largest moving coastal dunes in the Southern Hemisphere. The eerie landscape and soaring 30 metre dunes feels closer to a deserted wasteland than the Pacific Coast, however the natural beauty and ancient heritage is truly one-of-a-kind. You can explore these delights by sand boarding down the dunes, trek around on quad bikes, ride a horse or camel or simply take it in from the comfort of a 4WD. 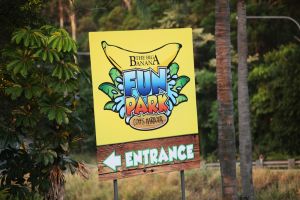 There’s not much that Australians love more than a ‘Big Thing’ tourist attraction, and The Big Banana is no exception. This Coffs Harbour landmark was built in 1964 and has been featured in a multitude of coffee table books celebrating Aussie Icons ever since. The accompanying fun park includes a water slides, laser tag and ice skating, among other things to keep the family entertained. 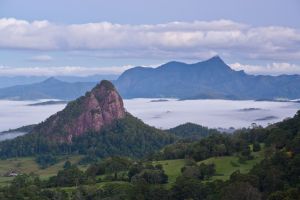 This vast collection of World Heritage-listed forests, affectionately dubbed ‘Australia’s Green Cauldron’, was formed by the land collapsing when an ancient volcano erupted. The Green Cauldron is a living Gondwana rainforest and is regarded as a rich melting-pot of indigenous culture and ecological significance. The region stretches from west of the Gold Coast down to the Byron Bay hinterlands, however the Wollumbin (Mt Warning) National Park at its epicentre is a great starting point. 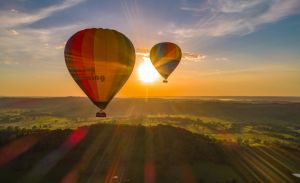 Watching the sunrise with a glass of bubbly in hand while floating over the Byron Bay Hinterland? Sign me up! Byron Bay Ballooning lets you do just that, with packages including a gourmet champagne breakfast and a one hour sunrise experience.

The famous Yatala Pie Shop has been fueling hungry roadtrippers heading up and down the east coast for generations. With a wide range of pies and pastries to choose from (both savoury and sweet), the Yatala Pie Shop has got something for even the fussiest traveller. This Queensland institution can be spotted from the highway thanks to ‘Famous Yatala Pies’ emblazoned across the red roof and a giant ‘pie in the sky’.

The Macadamia Castle is a really delightful stop for the family which combines furry friends, food and a little bit of education to boot. Whether you’re feeding goats in the farmyard Nursery or sinking a hole-in-one on the castle-themed mini golf course, there’s something for everyone, not to mention the medieval facade – fortress walls, turrets and all! 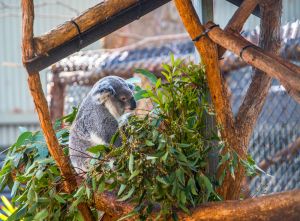 There’s plenty to do and see in the coastal town of Port Macquarie, however none as cute and cuddly as the Koala Hospital. After a mammoth effort during, and in the wake of, the disastrous bushfire season of early 2020, the Port Macquarie Koala Hospital is thriving thanks to widespread support and donations. You can pop in and see the koalas in their care on a self-guided or guided tour, you might even be tempted to adopt one yourself!

How long does it take to drive from Brisbane to Sydney?

If you’re sticking to the highway, and stick to the speed limits, driving from Brisbane to Sydney and vice versa will take you around 10 hours, with the distance just over 900 kilometres. However, there is a one-hour time difference between Brisbane and Sydney, with Brisbane one hour behind Sydney, so don’t be surprised if you arrive at a different time to what you were expecting!

How to travel between Brisbane and Sydney

You can travel from Brisbane and Sydney, and vice versa, by car, train and plane, giving you a few options to choose from depending on your budget and how long you want to spend travelling. Of course, if you want to visit the places above, driving is the only option, although you’ll have to decide whether you want to take your own wheels, or hire a car for the journey.

Is it worth driving from Brisbane to Sydney?

With plenty to see and do along the way, the trip between Brisbane and Sydney should be on everyone’s roadtrip to-do list, regardless of whether you’re looking to get closer to nature, or you’re simply just hungry for lunch and looking to tuck into a nice meat pie.