The Kmart pie maker has taken Aussie kitchens by storm and quite literally become a social media sensation, boasting its own dedicated private Facebook group with hundreds of thousands of followers to date, sharing recipes and hacks for the budget buy. But, is the $15 (was $29) Kmart Anko pie maker really THAT good? And, how does it compare to similar cheap alternatives from ALDI, Big W, and Target? Here’s our no porky pies review. 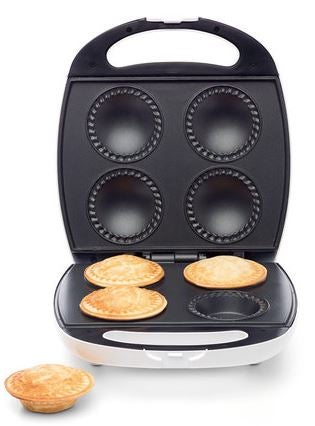 The Kmart Anko pie maker can bake four homemade pies to golden, flaky perfection – all in one go. Just pre-heat your appliance for five minutes beforehand, pop your pastry and filling in and allow for 15 minutes of bake time (depending on the filling). Keep in mind that meat pies take longer to cook than fruit or veggie pies. Either way, there’s a ‘ready’ and ‘power on’ light on the unit to let you know when it’s time to plate up.

Other specs include a non-stick cooking plate to make washing up easier, a thermostatically locked lock system, and cool-touch housing and heat-insulated handle to minimise the risk of burns. It also comes with a reversible pastry cutter to help construct your pies.

Most online reviews describe Kmart’s cult appliance as ‘quick, easy and convenient’ and for $15, it’s certainly worth it. Most users give it a solid four stars out of five online. Plus, it doesn’t just make pies. The Kmart pie maker can bake all sorts of sweet and savoury pastries, including doughnuts, mini pizzas, ham and cheese scrolls etc. The only downside is that the cooking plate is quite small (28.5cm x 21.5cm) and so are the pie moulds, so one batch would only feed maybe two people. On the flip side, it’s great for portion control! Kmart’s pie maker is available both online and in-store.

What can you make in the Kmart pie maker?

The real question is what can’t you make? The Kmart pie maker can help you whip up all sorts of sweet and savoury pastries, as well as frittatas, muffins, quiches and you can even cook eggs in it! We’ve rounded up some recipe ideas to try with your Kmart pie maker.

Here’s a high-level comparison of prices and specs for all budget pie makers mentioned above:

*Prices taken from respective retailers and correct as of October 2021. 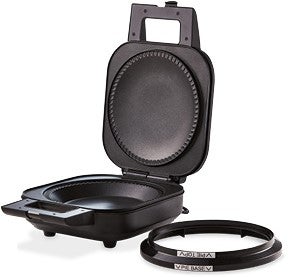 Discount supermarket ALDI offers not one, but two different models of pie makers; only available in its seasonal Special Buys. Both are made by Ambiano (a trademark brand of ALDI). The first is the ALDI Family Pie Maker which features one large deep fill pie mould to make one big pie. And, who doesn’t love a mega pie. Then, there’s the traditional four-hole pie maker for the same price of $34.99, so you can ‘pie-oneer’ many recipes at once. Both gadgets feature ‘power’ and ‘ready’ light indicators, a non-stick coating plate, handle locking latch and come with a reversible pastry cutter.

So, how does the ALDI pie maker compare to the Kmart version? Well, it has one major perk. It makes bigger pies which is a huge bonus if you’re cooking for a family. The four-mould model also has deeper moulds and can cook four individual pies in about eight to 12 minutes, depending on your desired level of browning and the filling. For $6 more, it’s an absolute steal. That is if you can nab one from the middle aisle before they sell out. 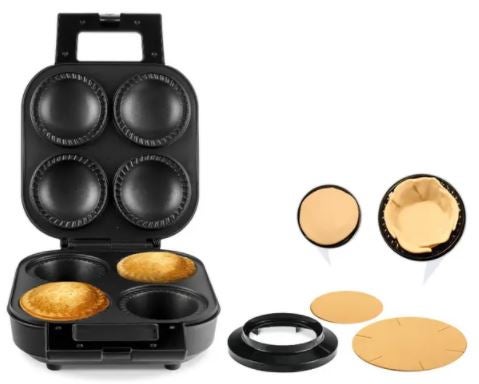 The Kogan Deep Dish 4 Pie Maker comes with (as the name suggests) four deep pie moulds to make short work of homemade pies, and a ‘ready’ light which turns from red to green when the appliance is ready to use. Just pop in the pastry sheets and filling in the mould, close the lid and leave to bake for about 10 minutes or until golden brown. This 0.2L capacity pie maker can also make tarts, quiches, biscuits and cakes.

How does it fare against Kmart’s gadget? Its large capacity is definitely a drawcard and so is the fact that this model comes with some recipes included and various pastry cutters to make prepping easier. For $10 more than the Kmart version, you’d be crazy not to give it a go, although this will also depend on shipping costs if you’re buying online. 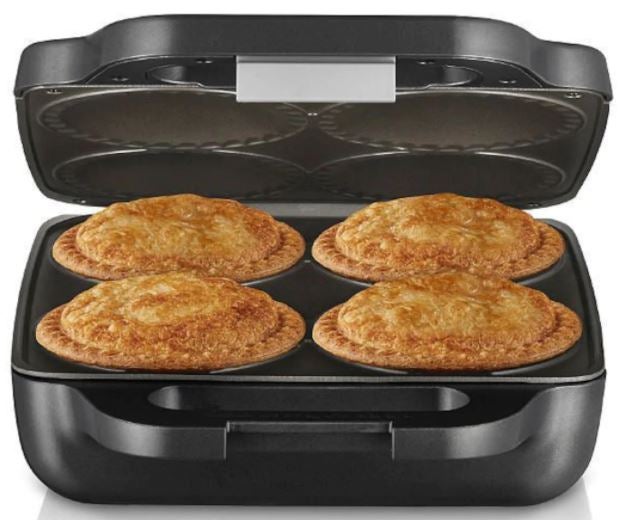 Both Big W and Target sell the same Sunbeam Pie Magic Traditional 4 Up for $79. It has an extra-deep base and top plates, to make four larger, traditional size pies (120 x 42mm). It’s the model which makes the largest pies by far and it’s ideal for pastries with extra filling and pies with shortcrust pastry tops which can take a little longer to cook than those with shortcrust bases.

This Sunbeam model is also boasted to heat frozen or thawed store-bought pies, perfect if you’re time poor (or a lazy cook), or both! According to the brand, this model can bake a traditional size pie in 12-15 minutes. Additionally, it features non-stick, easy clean plates and comes with a bonus pastry cutter.

So, how does it compare to Kmart’s cult favourite? The $50 price difference is notable, but that’s warranted for a model from a reputable brand like Sunbeam and for the extra convenience this model affords. It’s stated to be able to cook pies from frozen, which not many pie makers do. It also has extra-deep pie moulds with the capacity to make larger pies. Is it worth the extra 50 bucks? Heck yes.

Is the Kmart pie maker worth buying?

The Kmart pie maker was $29 and reduced to $15, which is now the cheapest in the market by a mile. However, its pie moulds aren’t as deep and wide as other models available (see below). It means that it can only make relatively small pies in each batch. That’s not so bad if you’re cooking for the kids or making a small snack for two. The Anko pie maker is also multifunctional; it can make desserts, and can even serve as a waffle maker. Its cheap price tag and rave reviews definitely make it a worthwhile buy, even if you only end up using it occasionally.