Show Important Notes^* Hide Important Notes^*
* Overall satisfaction is an individual rating and not a combined total of all ratings. By default, brands with equal overall satisfaction ratings are sorted by the mean overall satisfaction score as rated by consumers. You can click the arrows at the top of any column in the table to sort by the results in that column.
^ By clicking on a brand or ‘details’ button, you will leave Canstar Blue and be taken to our referral partner to compare. You agree that Canstar Blue’s terms and conditions apply to this referral. If you click on a brand that our referral partner does not cover, you will be taken to a brand page on Canstar Blue.
Canstar Blue research finalised in March 2020, published in April 2020. 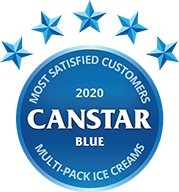 Aussies rated Connoisseur the cream of the crop in Canstar Blue’s ice cream multipack ratings. The brand scored five-star reviews for taste, consistency, variety and overall satisfaction. It also got four stars for packaging and three stars for value for money.

“I hate ice cream”, said no one ever. After all, it’s the go-to sweet frozen treat for every mood – for when you’re feeling peckish, cheerful, and of course for when life gives you lemons. It’s the dessert that never disappoints – and that’s why Canstar Blue sets out to find the scoop on which ice cream multipack brands Aussies across the country rate the highest.

To do this, we’ve again surveyed more than 1,700 consumers for their feedback on different brands of multipack ice creams they’ve bought (from a supermarket or grocer) and eaten over the last three months. Respondents rated brands on taste, consistency, packaging design, variety, value for money and overall satisfaction. Brands which met the minimum required survey sample size (30 responses) are included in the results above.

Our tasty line up of ice cream multipacks featured 14 brands, but just one was rated best – Connoisseur! It received five-star reviews for overall satisfaction and the majority of categories. 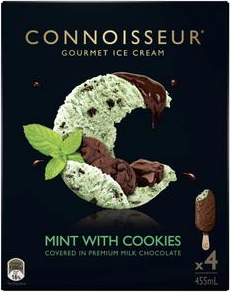 Here are the best ice cream multipack brands in Australia, as rated by consumers in Canstar Blue’s latest review:

Connoisseur was rated cream of the crop in our 2020 ice cream multipacks review. It was the only brand to get a five-star rating for overall satisfaction, taste and consistency. Connoisseur also got top marks for variety but slumped in the packaging design and value for money categories where it rated four and three stars respectively.

Last year’s winner, ALDI Monarc Utopia dropped to second place in our latest ratings but remained at the number one spot for best value for money with a five-star accolade. Overall, six brands scored at least one five-star rating, notably Weis and Magnum in the variety category alongside our current ratings winner Connoisseur. Meanwhile, Maxibon, Cornetto, Cadbury and Proud & Punch achieved five stars for packaging design. 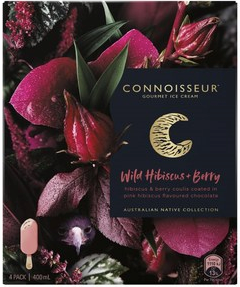 What’s better than a regular sandwich? A Maxibon sandwich of course! Part of the Peters brand which is one of Australia’s largest ice cream manufacturers, Maxibon is the ice cream for biters not lickers. It’s a slab of velvety ice cream loaded with choc chips and nuts, sandwiched between two biscuits at one end and smothered in choc coating at the other. Flavour options include Caramel Rough Nut, Honeycomb, Vanilla, Monster Cookie and Double Handle Caramel.

Fruit and cream go together like peanut butter and jam. So, Weis has put them together to create heaven in a Weis bar. Weis products are made with real fruits and contain no artificial colours or flavours, making it a heathier ice cream option. The brand offers both ice cream tubs and multipack ice creams, as well as sorbets and frozen yoghurts. Weis ice cream bars come in exotic flavours like Blackberry and Rich Vanilla, Macadamia and Mango, Passionfruit and Coconut and just Mango Original. 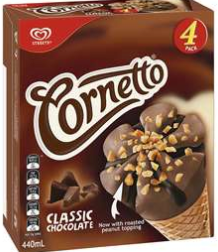 Everybody knows Cornetto! This crispy baked wafer cone coated with a chocolatey layer on the inside and filled with delicious ice cream has satisfied our cravings for many generations. Cornetto is owned by Streets, one of the largest ice cream manufacturers in Australia. Some flavours from the Cornetto range of multipack ice creams include Classic Chocolate, Classic Vanilla, Cookies and Cream, Cornetto Gaytime, plus more.

Looking for a little indulgence? Have at it and treat yourself to a Magnum. The brand’s ice cream bars offer the perfect balance of cracking chocolate, velvety smooth ice cream and sustainability.  Magnum’s chocolate is made from responsibly sourced coco beans selected by Rainforest Alliance Certified™ farmers. The brand also offers ice cream tubs and dairy-free alternatives for vegans and those with a dairy intolerance. Popular flavours from the Magnum multipack range include Magnum Classic, Magnum Almond, Magnum White, Magnum Caramel and Magnum Peppermint.

Drumsticks are another childhood home-grown favourite. It’s hard to resist this smooth, flavoured ice cream encased in a crunchy wafer cone with a choc tip. Drumstick is another Peters offshoot and offers a wide range of popular and gourmet flavours in four-pack and mini-sized packs, including Chocolate, Affogato, Choc Mint, Boysenberry, Raspberry and Coconut, Roasted Hazelnut, Caramel and more. The brand also recently launched a vegan Drumstick ice cream range made with coconut milk.

Coles own brand is the supermarket’s trademark line of ‘great-value’ essentials including dairy products like milk, cheese, yoghurt and of course ice cream. The private label offers ice cream bars in flavours like Creamy Vanilla, Boysenberry, Choc Mint, Triple Coated Caramel, as well as ice pops in funky flavours like Sweet and Sour and Mystical Pops.

Cadbury may best be known for its smooth and creamy milk chocolate, but the brand also serves that delicious flavour from Cadbury favourites like Crunchie, Picnic and Freddo, in ice cream tubs, bars and cakes to create the perfect frozen treat for any occasion.

Looking for real ice cream flavours and ingredients that pack a punch? Then look no further than Proud & Punch. This brand offers smoothie and juice pops and coconut ice cream and almond milk bars made from quality ingredients right here in Australia. Proud & Punch products are gluten free and contain no artificial nasties and most are also vegan friendly. Some flavours from the range include Coconut Mango, Strawberry Acai, Berry Coconut and Berry Passion Fruit.

Which ice cream flavour is best? It’s a question for the ages, but we may finally have an answer. Here are the flavours Aussies picked as their favourite in our survey:

Other interesting finds from our survey results revealed that 14% of respondents eat ice cream every day during summer, with two in five (44%) stating they prefer to eat single serves compared to a tub – it certainly might help with portion control! One in five adults (20%) only enjoy the treat on special occasions and 17% feel guilty eating it. Nevertheless, 37% say they buy ice cream on their regular shop.

So, what is ice cream anyway?

Today is the day you find out you’ve been living a lie! The ice cream you have in your freezer might not actually be ‘ice cream’ at all! According to Food Standards Australia New Zealand, ice cream is officially defined as ‘a sweet frozen food that is made from cream or milk products or both, and other foods, and is generally aerated’. A food that is sold as ‘ice cream’ must, by law:

This means many of the ‘ice creams’ you buy from the supermarket are in fact confectionary due to the lack of dairy cream they contain. Generally speaking, we refer to all products in the freezer aisles as ice cream for the sake of our ratings. You know what we mean…

Canstar Blue surveyed 3,000 Australian adults across a range of categories to measure and track customer satisfaction, via ISO 26362 accredited research panels managed by Qualtrics. The outcomes reported are the results from customers within the survey group who have bought and eaten ice cream from an ice cream multipack from a supermarket or grocer (i.e. not from an ice cream store or café/restaurant) in the last 3 months – in this case, 980 people.