The spooky season is upon us, meaning you’ll likely see some deals and discounts in stores, online, and from phone and internet providers.

Aussie Broadband typically gets involved with Halloween. Last year, Aussie had a special six-month discount across some of its plans, and this year, the telco is offering over $8,000 in prizes as part of a huge Halloween competition.

Entrants could win either one major prize, or one of 10 runner-up prizes, with an iPhone 13, Sony 55′ 4K TV, and a Google Nest Hub up for grabs. Let’s jump into everything you need to know about Aussie Broadband’s Halloween competition.

You can enter the competition once, or you can receive additional entries through the following ways:

With entries open now, Aussie Broadband’s Halloween competition will last for a month, ending on November 5 at 11.59pm AEDST. Results will be drawn on November 8 at 2.30pm AEDST. You’ll need to be 18 or over to enter. 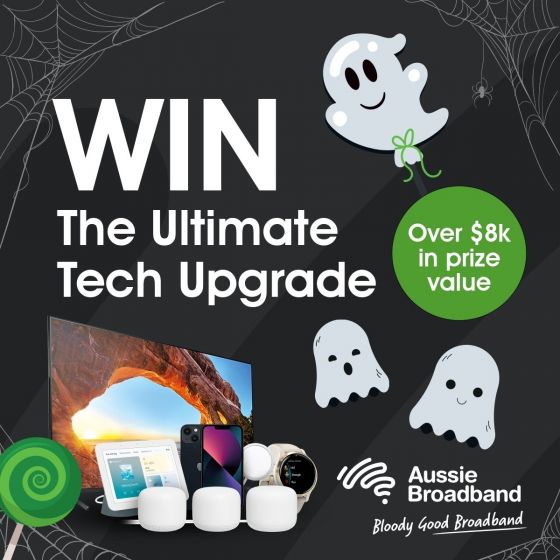 What’s on the line for Aussie Broadband’s Halloween Competition?

This competition is made up of one major prize and 10 runner-up prizes. Anyone who enters has a chance of winning, but you can only win one prize. Here’s what the prizes are:

The major prize pack is made up of an assortment of gifts that Aussie Broadband calls the ‘Ultimate Halloween Tech Upgrade’. Here’s what you can get:

These prizes are available to a single winner, and there’s only one major prize pack on the line. If your home can’t be serviced by the NBN, Aussie Broadband will award an alternative prize of equal value in lieu of this (the rest of the items in this package will be unaffected). If you enter and don’t get the major prize pack, there are 10 runner-up prizes available.

The runner-up prize for the competition includes two months free on Aussie Broadband’s HomeFast plan (NBN 100), with a value of $198. In the event that this speed isn’t compatible with your address and connection, Aussie Broadband will service you with the best available internet speed. There are 10 of these prizes available.

Keep in mind that Aussie Broadband does not provide satellite NBN plans or ADSL plans. In the event that you win a runner-up prize and live at an address serviced by either of these technology types, Aussie Broadband will award an alternative prize of equal value to make up for the internet plan prize. You may also transfer this runner-up prize to a family member or friend, in the event that you cannot use the NBN plan.

Aussie Broadband consistently ranks highly in Canstar Blue’s Customer Satisfaction ratings, topping the list last year, and coming in third this year, with five stars for speed and reliability, and four stars for customer service, value for money, ease of setup and bill and cost clarity (and four stars overall).

Customers can add on entertainment bundles through Fetch, and can also get a free first month with the code FASTMONTH. If you’re interested in an Aussie Broadband plan, you can check the plans out below.

The following table shows selected published Aussie Broadband NBN plans on Canstar Blue’s database, listed in order of cost, from the lowest to highest and then by data allowance, largest to smallest. Use our comparison tool to see plans from a range of other providers. This is a selection of products with links to a referral partner.