Move over, NBN 100. Gigabit NBN – also known as NBN 1000 – is up to 10 times faster, and it’s now available nationwide to selected residential customers.

But there’s a lot to get up to speed on – an NBN 1000 plan isn’t for everyone, nor is it available in every home. Moreover, gigabit-speed NBN is expensive, and not offered by every Aussie provider. But if you’re interested in ultra-fast broadband, let’s dive into everything you need to know about NBN 1000.

The NBN 1000 plan is the fastest NBN speed on offer for residential addresses in Australia, but it’s only available over certain NBN connection types. The maximum download speed on these plans is 1000 megabits per second (Mbps) – this is why the NBN 1000 plan is also referred to as ‘gigabit NBN’, as 1000 megabits is equal to one gigabit (Gbps). So yeah, pretty quick!

Although download speeds are ultra-fast, the maximum upload speed of an NBN 1000 plan is 50Mbps. But overall, an NBN 1000 plan is much faster than an NBN 100 plan, which was previously the fastest speed tier offered by NBN providers. The trade-off for these fast speeds is the price, as NBN 1000 plans are some of the most expensive consumer broadband options on the market.

Residential NBN 1000 plans are now offered by a wide selection of providers, including Vodafone, Telstra, Aussie Broadband, Kogan and Superloop. Prices, plan inclusions and upload speeds will vary vastly between each provider.

If you want the fastest NBN speeds available, be prepared to pay a far higher price. Recent wholesale price changes introduced by NBN Co have made NBN 1000 plans more affordable for residential customers, but you’re still looking at the $140-$180 per month mark for unlimited data.

Aussie Broadband offers NBN 1000 plans from $149 per month and Superloop offers its plan for $139.95, but while Aussie Broadband’s NBN 1000 plan includes unlimited data, Superloop caps usage at 3 Terabyte per month. While this is more than enough for even the heaviest of data users, if you do exceed Superloop’s cap your speeds will be slowed to 100Mbps until your billing cycle resets.

Vodafone also offers NBN 1000 plans, which prices its gigabit-speed unlimited data plan at $150 per month, but gives customers a $10 discount for bundling their NBN service with an eligible Vodafone phone plan. All Vodafone NBN plans are month-to-month and free from setup costs, excluding an optional charge for the Vodafone WiFi Hub modem.

Kogan has also jumped on board offering an NBN 1000 speed plan (as well as NBN 250). For NBN 1000 speeds with Kogan, you’ll be paying $139.90 per month, although new customers may be eligible to score a discounted pricing for the first six months (terms apply). Plans are month-to-month with the option to add on a modem for an additional $69 upfront.

The biggest provider to sell NBN 1000 plans is Telstra, which offers the speed as an add-on to its Premium NBN 100 plan. Customers on Telstra Ultrafast will pay a massive $180 for an unlimited data plan on a month-to-month contract, plus up to $216 for a Telstra modem (free if you stay connected for 24 months).

In addition to a steep monthly fee, an NBN 1000 plan also requires an investment in hardware. You’ll want a modem/router that’s capable of a consistent NBN 1000 speed, which could set you back around $125 at a minimum – your standard NBN modem is unlikely to cut it. Aussie Broadband recommends gigabit NBN customers use the Google Nest WiFi for this very reason, and offers the device in packs from $369 upfront on all fast NBN plans.

The aforementioned Vodafone Hub can support an ultra-fast NBN connection, but only if you skip the Ethernet cable and use the device’s 5GHz WiFi to connect. If you do add this to your plan, the Hub will set you back $180, but is free of charge when you stay connected for 36 months.

Compared to NBN 100 plans – which start at around $75 per month, and can go up to $130 or more – the price gap between an NBN 100 plan and an NBN 1000 plan is fairly steep, but not completely unfair given the potential speeds offered by gigabit NBN. If you’re working from home or rely heavily on your broadband, this might be a good investment, but you may need to weigh up speeds versus your budget. 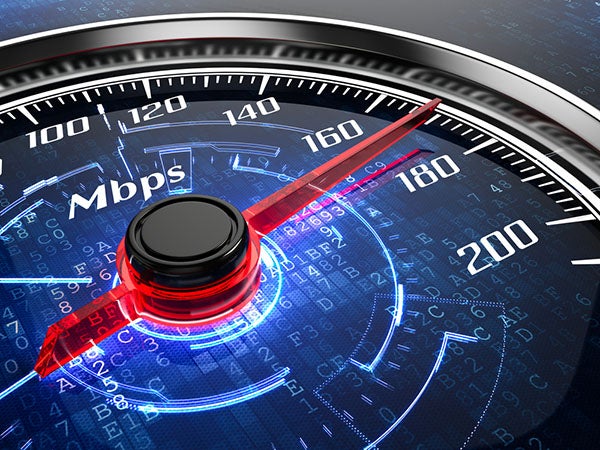 An NBN 1000 plan is the fastest available residential NBN speed in the country, up to 10 times faster than mainstream NBN speed. At its maximum theoretical speed, gigabit NBN should offer the following download times:

Keep in mind that these speeds are calculated from the maximum potential speed, and real-world results may vary. Because this speed tier is quite new, sellers aren’t yet able to provide an accurate typical evening speed, which lists the average download speed experienced by users between 7pm and 11pm.

However, customers should expect a minimum of 215Mbps, which is Aussie Broadband’s typical evening speed for NBN 250. Aussie Broadband has estimated that off-peak speeds could be as fast as 800-900Mbps, so overall an NBN 1000 plan offers an incredibly fast connection.

Your actual speeds can vary depending on your provider, NBN connection type, and more. Some of the factors that can impact your download and upload speeds include:

An NBN 1000 plan is only available on two NBN connection types: Fibre to the Premises (FTTP) and Hybrid Fibre Coaxial (HFC). For FTTP connections, NBN 1000 plans is available across the board, but for HFC, you’ll need to speak to your ISP about the technology available at your property, as only around 7% of HFC-connected homes are eligible for ultra-fast NBN.

The limited access to NBN 1000 plans is because the speeds offered are simply too fast for slower connections, such as Fibre to the Building (FTTB) and Fibre to the Node (FTTN).

If you still want an NBN 1000 plan, but don’t have the right technology to access these fast speeds, you do have the option to upgrade. If you’ve got money to spend, you could consider the Technology Choice Program, which allows homes and neighbourhoods to pay to switch to FTTP, though it doesn’t come cheap.

An NBN 1000 plan could be worth considering if you need a fast, reliable connection to work from home. Gigabit speed NBN may also suit users who stream a lot of high-definition and 4K content, regularly download large files, or are serious online gamers. For the most part though, you might be better off with an NBN 25 or NBN 50 plan if you’re a casual user, especially if you’re not sharing a plan with multiple household members.. Even if you’re a power user, an NBN 50 or NBN 100 plan might be a better fit if you’re trying to watch your spending.

If money isn’t an issue, and you value your NBN speed highly, an NBN 1000 plan could be a good investment. NBN 1000 plans are expensive compared with NBN 100, but all things considered – including the 10-times-faster maximum speed – it’s comparatively well-priced. An ultra-fast plan is also a great way to ward off any congestion on your internet connection – you could potentially say goodbye to loading screens and buffering symbols.

Before you jump on board, also consider upload speeds. These speeds vary between providers: Telstra, Vodafone and Superloop each offer 50Mbps upload speeds on their respective NBN 1000 plans, while Aussie Broadband’s NBN 1000 plan features 25Mbps uploads. This is something worth thinking about if you do lots of upload-intensive internet use, such as Twitch streaming, making video calls, or really any frequent online file transfers.

If you’re don’t fit into any of the above categories, then it’s probably not worth jumping on the NBN 1000 bandwagon. NBN 100 is typically seen as a plan for power users, so needless to say NBN 1000 is for extreme power users with the cash to match. However, if you’re interested in Vodafone, Superloop, Telstra, Kogan or Aussie Broadband’s fast speeds, it might be worth dipping your toe in by signing up for an NBN 100 or NBN 250 plan before making the jump to an NBN 1000 plan.

NBN 100 and NBN 250 plans are fairly fast to begin with, and upload speeds don’t vary too greatly between either speed tier. There’s a good chance you’ll barely notice the difference, unless you’re incredibly demanding on your internet use.