It’s safe to say that internet providers generally favour customers who are in it for the long term, as opposed to those who are renting or always on the move. With lengthy contracts, hefty exit fees and sometimes general inflexibility, providers evidently want you to stick around for a while. However, with a housing market that’s becoming increasingly un-affordable for some families, more than four million Australians now live in rented accommodation – often on a short lease of a year or less.

As a result of this ‘housing affordability crisis’ and rental boom, some internet service providers have jumped on board with broadband plans tailored specifically for renters. These include plans with short contracts and easy relocation options, no home phone line rental and/or low or no set-up fees, amongst other features. So what are the best deals available for renters? Read on to find out about some great internet plans for renters.

Internet plans for renters: What should I look out for?

There are a few things you need to look out for in a broadband plan if you’re renting – especially short term (i.e. a year or less). These include:

While these three may seem arbitrary if you just want the ‘cheapest’ internet plan, what you may need to consider is the fact that if and when it comes time to move on, will you be able to just up and leave without worrying about contracts? Will you have to worry about home phone numbers and associated costs? Not to mention, various cheap plans also incur hefty set-up fees that can make a plan prohibitive short-term. After all, you’re dealing with moving costs and paying a bond, so getting away with no set-up fees may be easier on the budget.

Chances are if you find a plan with all three features with your desired level of data, you’re onto a winner, but unfortunately it’s mostly a case of choosing a plan that ticks at least two of those boxes and deal with the other one.

Internet plans with short-term or no contracts

There are definitely many reasons why you might not want to be locked into a contract. Even in today’s fast-paced world, internet providers still love to tie you in for at least 12 months, with most plans on 24 month contracts. Some providers may offer ‘no contract’ plans but could get you somewhere else later down the track, whether it’s with home phone establishment fees, installation fees, expensive modem costs or any other hidden costs they can think of. However, there are a few providers that offer plans with no contracts and generous amounts of data, some of these providers have even started to waive setup fees whether it’s a for a special offer or indefinitely.

‘Naked’ is a term used to describe broadband plans that come with no home phone line rental. Some providers will automatically include home phone, while others will give you the option to add on home phone line rental or call packs, which could possibly and easily amount to an additional $20 or more per month on top of your plan. In this case, if you have no need for home phone calls – and who does with cheap unlimited mobile plans these days – then naked internet can be the way to go.

Going for a naked internet plan doesn’t mean you have to forego home phone calls entirely either. Man of these plans offer ‘pay as you go’ (PAYG) VoIP phone services. This is basically making calls over the internet, instead of through the traditional copper home line. With these plans you’ll have to pay extra for call packs or use PAYG call rates.

Broadband plans with low or no set-up fees

If you’re in the process of moving into your new home and having to contend with the extra costs like your bond, moving costs and any new furniture or appliances, having a broadband plan with hefty set-up fees is probably the last thing you need. These setup costs can greatly vary from provider to provider, with some charging up to $200 in setup fees. This extra money could be the difference between TV models or whether you go with a two or three-seater sofa. The good news is that some telcos do waive setup fees, even on no contract plans:

We’re not talking about using your mobile phone’s data allowance all the time, but several providers do offer mobile broadband plans with generous amounts of data and an included modem. Mobile broadband can differ between providers, where some only offer SIM card (to use either with a tablet or your own modem), others offer wireless broadband with modems which are either portable or a modem that needs to be plugged in to be used.

With these plans you get a SIM card like any old mobile phone plan, but you will get an included modem you can simply plug it into. These options are great for if you’re in a share house and want your own internet connection, or if you want something truly mobile – able to go where you go with no fuss. You’ll also be able to take the modem with you if you decide to move, so you might decide to sign on for a 24-month contract.

Generally, contracts matter less here as you can freely move the plan around, but if you’re buying one of these plans as a temporary solution, then finding a no contract solution may be the way to go. As you can see, you’re probably going to be paying more by the month than with an ADSL, NBN or cable plan, but you may find the flexibility to be truly worth it.

If you already have a modem or device and you simply want the SIM-only plan to go with it, several telcos offer SIM-only mobile broadband plans. The advantage to going with one of these plans is that your choice is based on value for money and not based on the modem available from the providers. It’s also handy if you already have a modem or if you prefer to select and buy a modem yourself.

Some of these SIM-only mobile broadband plans are available as month-to-month plans, which is handy if this is only an interim solution before you get connected to an NBN plan. Other plans are available on contracts and since it’s a mobile broadband plan, you’ll be able to take your internet with you when you move, so you probably won’t need to cancel if you do move mid-contract.

Modems and wireless routers when renting

Probably the last thing you will consider when moving out – but an important thing nonetheless – is what the deal is with buying a modem or router, or whether your new provider will include one.

A lot of the providers mentioned above do include a router or modem as standard, however some of the cheapest plans do not, or charge extra for one, especially on no-contract plans. Buying your own router can be a blessing in disguise, as you can find some pretty cheap ones that do the job well, or if you want to have the best possible internet experience, you can choose a higher-end one. In any case, it’s worth looking into the finer detail of a plan you’re after to see if it includes a router. If not, our buying guide may be able to help.

If you’re transitioning to an NBN connection, you’ll also have to see if your router is ready for it. Chances are that if your router is less than a few years old it will be, but if it’s older you may want to think about upgrading. This is because with the NBN you’ll likely experience faster speeds, so to get the best experience you’ll want to get a compatible router. Luckily many providers offer a free ‘NBN transition’ package, which may include an upgrade of your wireless router. If not, most routers available in-store that provide 300Mbps ‘link speeds’ or better are viable contenders for your money

Internet for renters — which is the best option?

All in all, renters are pretty well covered when it comes to home internet plans, but whether you rent or own your own home, the most important message is that it’s good to shop around and keep an eye out for the best deal. If you are shopping around, you’ll quickly find that you’ll have to choose between:

Very rarely do plans feature all three benefits. Often it’s a case of which of the one or two options is your top priority, which is often going to be determined by which will save you the most in the long run. Often, dealing with a contracted plan costs you no extra and can even save you money, but be wary of those lengthy two year contracts though, especially if there are cancellation fees. By the same token, set-up fees often come with plans on no-contract, and the cheaper plans also often make you fork out extra for line rental and home phone calls. If you don’t want to BYO modem, you’ll also find that the contract plans will include a modem usually at $0 extra cost, while no lock-in contracts will charge extra if you want a modem.

‘Naked’ internet is usually a safe way to go if renting, but you are probably going to pay slightly higher fees per month as opposed to other avenues. NBN connections also often come with no contracts and no line rental, but unfortunately often come with set-up fees and a higher per-month cost. Mobile broadband is also a good option, as there are some reasonably priced plans with decent data inclusions and you can easily take it with you if you move.

Overall, the message is that finding the ideal plan is a juggling act and may require some compromise. The best bet is to shop around with how much data you need at a price that’s comfortable for you and go from there. As always, it’s best to see what service is available in your area and compare your options to find the right deal for you. 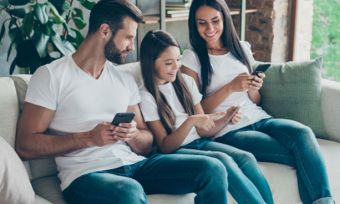