Amaysim has been in the telco game since 2010, and since its launch has established itself as one of the best-known and most popular alternatives to Telstra, Vodafone or Optus. With a small but impressive range of SIM-only plans on offer, Amaysim offers simplicity and flexibility. There are no lock-in contracts and you can buy an Amaysim SIM card both online and from stores including Coles, Woolworths, 7-Eleven and Australia Post.

All Amaysim mobile plans are offered as prepaid, meaning up you’ll pay for your usage upfront. This is a great way to avoid unexpected overages, and you can set up automatically-renewing payments to ensure you’re never without service, rather than purchasing an Amaysim recharge after each expiry. You can also take advantage of Amaysim’s unlimited data banking, giving you access to any unused data from previous months, although if you leave Amaysim, this data bank will no longer be available.

With standard mobile plans starting from $12 per 28 days and up to $50 for 28 days, there are affordable options for almost every type of phone user. Amaysim also provides easy account monitoring and data usage records via its customer app, and is known for offering consistently high levels of customer service and support.

Overall, if you’re looking for a great value SIM plan, Amaysim is definitely worth checking out. Here’s everything you need to know about Amaysim’s SIM-only plans.

What do you get with Amaysim prepaid plans?

Although Amaysim previously offered postpaid service, for several years now the telco has switched to offering prepaid-only plans to new customers, with plans available across a range of different expiry periods. 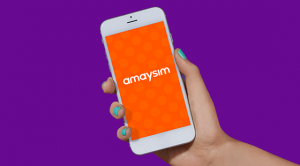 All Amaysim prepaid SIM-only plans are bring-your-own-phone (SIM only) and its five main plans run over 28 days. There are also a few long-expiry prepaid plans available which run over six months and one year, along with a simple short-term plan that runs over seven days. If you’ve got an unlocked 3G or 4G capable phone, you should have no issues bringing it to Amaysim. Customers also get access to an unlimited data bank, where you’ll be able to roll over any unused data.

The following table shows a selection of published Amaysim prepaid phone plans on Canstar Blue’s database, listed in order of cost, from the lowest to highest. Use our comparison tool to see plans from a range of other providers. This is a selection of products with links to a referral partner.

What does Amaysim offer?

Along with the standard national talk, text, and data inclusions, selected Amaysim plans also included unlimited international calls to 28 or 42 countries, depending on your plan.

There are no setup costs, you’ll get free standard SIM delivery, along with extras such as data banking, add-on data and international roaming. A quick checklist of what you will and won’t find on Amaysim plans is below.

Which network does Amaysim use?

Amaysim is an Optus Mobile Virtual Network Operator (MVNO), meaning it offers service on Optus’ 3G and 4G Plus networks. So if you move to Amaysim, you’ll get similar coverage and data speeds as you would on an Optus plan. While Optus is so far the only network provider to offer its 5G network to MVNOs, Amaysim is yet to take up the offer.

Optus’ mobile network covers 98.5% of the Australian population – just behind Telstra, and ahead of Vodafone. The telco has also been stepping up its rural coverage in recent years, and in 2018 had committed to investing one billion dollars to improve service in regional and remote areas.

More than 2,200 new Optus towers have been built in over one thousand regional towns, and almost 1,500 existing towers have been upgraded – so even if you don’t live in one of the major cities, Optus is working to keep you connected.

Amaysim plans don’t come with the perks you’ll find from higher-priced telcos, such as data-free streaming or free music subscriptions. However, Amaysim does include free international on several plans, plus add-on data and auto-recharge options.

Priced at just $12 every 28 days, Amaysim’s entry-level plan features unlimited talk and text in Australia to standard numbers, plus 2GB of data. It’s a good option for anyone who needs an unlimited call and SMS allowance, but doesn’t require much data.

If you need a little more data each month, Amaysim’s $20 plan bumps up your allowance to 6GB, and also features unlimited standard calls and text within Australia.

Craving lots of data? Amaysim’s 30GB plan offers plenty of gigabytes to get you through the month. Priced at $30, this plans also includes unlimited Aussie talk and text, plus unlimited standard calls to 28 selected countries.

If 30GB isn‘t quite enough, you can bump up your data on the 50GB Amaysim plan for just $10 more each month ($40). This plan also includes unlimited talk and text to 42 countries, plus unlimited standard Australian talk and text.

Featuring 80GB of data each month, Amaysim’s $50 plan also throws in unlimited calls and SMS to 42 countries, as well as unlimited standard talk and text within Australia.

Recharging a prepaid plan can be a bit of a chore, so if you’d prefer a set and forget option, Amaysim has three long-expiry plans available. For $150, you’ll get unlimited standard national calls and SMS, plus unlimited standard international talk and SMS to 42 select countries and 150GB of data over a six month expiry period, which works out to be around $25 for 25GB of data per month.

If you’re an infrequent user, or just need a back-up SIM plan in case of emergencies, Amaysim also offers a $10 pay-as-you-go plan. Credit lasts for 365 days, and you can add credit monthly or opt to pay on a postpaid basis. Call rates are from $0.15 per minute to standard Australian numbers, with texts priced at $0.15 for SMS and $0.49 per MMS. If you need data, it’s priced at 7.2 cents per MB of data.

Also known as data-only plans, Amaysim offers three data-only plans which can be used in a SIM-compatible device, such as a tablet, modem or even your phone. Plans start at $15 for 7GB of data and go up to $60 with 90GB of data, all over a 28-day expiry.

The following table shows a selection of  published Amaysim mobile broadband plans on Canstar Blue’s database, listed in order of cost, from the lowest to highest and then by data allowance, largest to smallest. This is a selection of products with links to referral partners.

Want to know how you can get in contact with Amaysim? The telco offers several contact and support options, including:

How does Amaysim compare?

If you’re interested in Optus network coverage, but want to shop around first, there are quite a few similar MVNOs offering cheaper SIM-only plans – check out the list below:

When all is said and done, Amaysim continues to be one of the most popular and innovative MVNOs in the market. Providing easy-to-understand and value-packed plans, paired with reputable customer service, it’s hard to beat Amaysim as an all-round package. However, it’s also worth keeping an eye on some of its low-cost rivals, which also offer competitive plans and prices on the Optus network.

Overall, Amaysim’s range of plans cover most usage types, and its 80GB for $50 plan is a great deal if you’re serious about streaming and downloading. The inclusion of unlimited international calls to selected countries on select plans is also great news for customers with loved ones overseas, although the lack of affordable travel roaming options means you’ll probably prefer not to use your service outside of Australia.

Amaysim’s simple, flexible plans are worth a look if you’re after a prepaid service that keeps you in control. But as always, it pays to shop around before shelling out for a new SIM and plan.

What do customers think about Amaysim phone plans?

In 2020, Australians gave Amaysim 4 out of 5 stars for Overall Customer Satisfaction in Canstar Blue’s annual Most Satisfied Customers Mobile SIM-Only Prepaid award. Amaysim had previously won the award in 2019.