City On a Hill is an American crime drama that dives into the corruption and racial prejudice that is said to have plagued the criminal justice landscape of Boston in the 90s. A fictional retelling of the ‘Boston Miracle’, a policing initiative which was implemented in Boston in 1996 in an attempt to curb youth gun violence, the series stars Kevin Bacon and Aldis Hodge as two unlikely allies who are forced to take on the case which snowballs and ultimately upends the entire Boston criminal justice system. To catch the series, find out where to tune in with this Canstar Blue article. 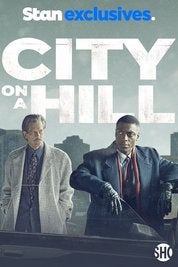 How to watch City On a Hill in Australia

Currently the only way to watch City On A Hill in Australia is through Stan.

City On A Hill on Stan

You can stream the complete first season of City On a Hill on Stan and watch it on demand. The second season will be released on the platform on March 29, 2021.

What’s City On a Hill about?

City On a Hill is a crime drama which stars Kevin Bacon, Aldis Hodge and Amanda Clayton, to name a few, based on the increasingly stressful times of Boston in the 1990s. The tense cops-and-robbers tale follows the unlikely alliance between a corrupt, yet widely respected, veteran FBI agent (Bacon) and the newly appointed Assistant District Attorney (Hodge) who hopes to flip the entire criminal justice system on its head.

Begrudgingly, they must combine forces to take down a family of armoured car robbers which has widespread effects on crime and justice in the city. The series is based on an original idea from actor Ben Affleck and the show’s creator Chuck Maclean.

What can we expect in Season two of City On a Hill?

The drama in season two centres on a federal housing project in the Roxbury neighbourhood of Boston, which has a history of drug violence and distrust in the local law enforcement. Fans of the show can expect to see more tense showdowns and friction between the assistant district attorney Ward and corrupt FBI veteran Rohr, whose uneasy working relationship and conflicting morals have been an undercurrent in many of the plot points in season one.

According to Aldis Hodge, who recently joined as a producer, the next season will focus on the conflicting lives of the central characters in the aftermath of the first season, and how they affect the lives of those around them. In an interview for EW, Hodge said “We have a bit more shock when it comes to the people around Jackie and Decourcy and how their lives intersect with ours,” he explained. “We’re going through different levels of fear, terror, self-reflection when it comes to who these people are in the space they’re in.” With some action expected, get onto the first season quickly to be ready when season two hits the screen.