Few things can excite a crowd like a slam-dunk, with basketball a popular sport around the globe. And no competition is bigger or better than the NBA, with Michael Jordan, Kobe Bryant and Lebron James household names (even if you just know Jordan from Space Jam). But as exciting as the NBA game can be, the time zone difference between America and Australia can quickly put you to sleep, particularly if you’re looking to catch your favourite team play live. If you’re really committed to watching the NBA live, or just see the highlights, where can you tune in, and how much will it cost you to see every dunk, pass and bucket? Canstar Blue has the answers.

How to watch NBA

NBA matches will be available to stream live and on-demand through Kayo, Foxtel, ESPN, SBS On Demand and through NBA League Pass.

Showing seven regular NBA season fixtures a week along with every game of the post-season (including the finals), Kayo additionally has all your WNBA and All-Star Weekend needs met, both live and on-demand for when you want to re-watch the best moments. You can also catch the biggest games of the college season, with selected men’s and women’s NCAA games available for both live-stream and on-demand coverage.

If American basketball isn’t enough, Kayo also broadcasts games from the NBL and WNBL seasons, along with all Australian international games in the FIBA competition, making it a suitable option for those big on their hoops. 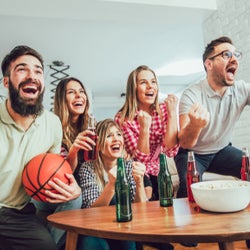 Foxtel offers a minimum of four live games per week, with more than 200 shown live throughout the season, including the playoffs, as well as the NBA Finals. In addition to the actual NBA games, Foxtel also provides a number of talk shows, helping fans to get the inside scoop on player stats, trades and news.

In addition to the NBA, Foxtel is also the place to catch live coverage of the NBL and WNBL, including every game of the men’s season, as well as every post-season women’s game. ESPN and Foxtel offer NCAA coverage, with live footage of the most anticipated games of the season.

NBA on SBS On Demand

SBS will play host to two NBA games per week, either live via SBS on Demand or in HD on SBS Viceland, giving fans a free option to catching a few games.

Whether you’re interested in following every game throughout the year, or just one team in particular, the NBA League Pass may be the best option for you. Offering monthly and yearly subscriptions – that you can cancel at any time – you can choose from three plans for all your NBA action.

The 8-Game Choice plan will set you back $14.99 per month (or $109.99 per year), and includes eight games a month, making it a suitable option for the casual fan. The Team Pass ($19.99 a month/$169.99 a year) option allows you to catch every regular season game of your favourite team, as well as the playoffs should the team qualify.

If you’re looking to catch every second of the season, the League Pass may be the best option for you, but will cost you $39.99 a month, or $299.99 a year. It may be worth the price however, as it gives you access to every match of the NBA season, including the All-Star weekend, as well as documentaries and NBA TV programs and analysis.

The 2021-2022 NBA season will start on October 20, 2021, with pre-season matches beginning from October 4. The season is expected to run until May, with the Playoffs taking place during the same month, while the NBA Finals are expected to be played in mid-July, 2022.