One of the biggest manufacturers of consumer electronics in both Japan and the world, Panasonic has been producing and selling air conditioners since 1958, when the company introduced its original ‘home air conditioner’. Since then, Panasonic has put a lot of effort into diversifying and improving its range of air conditioning products. In the consumer space, Panasonic is very much a split system specialist, with several ranges and many models of all shapes and sizes. Compare the range below in this Canstar Blue review.

Panasonic offers a number of models within its air conditioning range, including:

Read on to find out what Panasonic has to offer in each of the above ranges.

Designed to prevent the waste of energy, these sensors are able to monitor the location, movements, and when there’s no one in the rooms covered by the air conditioner. It can then adjust its output in terms of fan power and cooling power to better suit new conditions, and potentially save energy and increase efficiency. There are a massive 14 models in the range, with cooling capacities ranging from 2.5kW and up to 8kW. This has anywhere from a study to a small apartment covered.

These split systems also boast ‘nanoe-G’ technology. Nanoe-G is an air purification system developed by Panasonic that uses ‘nano technology’ consisting of ions and radicals to eliminate airborne bacteria and viruses. The system makes use of zero chemicals or cleaning agents, which makes it perfect for those who are either sensitive to chemicals or worried about their presence in the home.

If you live in a warmer climate and have no need for heating, a cooling-only system may make more sense and be cheaper to buy. Panasonic produces 15 cooling-only inverter systems. According to the Panasonic website, its inverter air conditioners are able to vary the rotation speed of their compressors, which allows for the use of less energy while maintaining a set temperature, along with increasing the speed at which the unit can cool a room at start-up. This means less electricity is used without sacrificing any efficiency or speed of operation.

Some models also feature ‘AEROWINGS’ technology with twin motorised blades to deliver ‘shower cooling’ which can cool a room faster to exact specifications.  Cooling-only capacities range from 2.5kW and up to 8kW.

Prices for cooling-only models are a little bit cheaper than the norm, with a 3.5kW unit retailing for about $1,400, versus nearly $2,000 for equivalent ECONAVI models.

For straightforward air conditioning that can both cool and heat, Panasonic’s ‘standard’ series may provide what you’re after. There are 16 models in this category, ranging in power capacities from 2.5kW to 8kW – as usual, suitable for a study to a small apartment.

These reverse cycle systems boast ‘AEROWINGS’ and ‘iAUTO-X’ technology, which may aid in energy efficiency and intelligent user-friendliness. iAUTO-X in particular automatically switches fan speeds depending on the temperature difference between the room and the set temperature. Panasonic’s range also adjusts capacity with its inverter technology, meaning the more people in the room the harder it works. On the other hand, fewer people in the room means it can operate at a lower capacity – down to 0.85kW at minimum power. Prices for these reverse cycle units are generally the cheapest at around $1,200 for the smallest models. 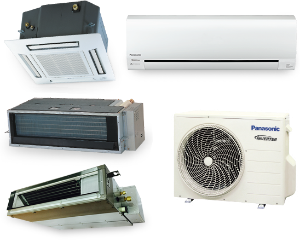 If you have a home with multiple rooms that need cooling, linking them all up to a Panasonic multi-split inverter system may be a good way to go. This means that one outdoor unit can power multiple indoor units, with the capacity to host up to five rooms. The models in the range are as follows:

These units are then compatible with a wide variety of indoor systems, making them easy to control. While the convenience and power are there to cool or heat your entire home from one central device, you will have to consider the cost. These outdoor units are made with big capacities and are likely to cost more.

How much do Panasonic air conditioners cost?

Panasonic air conditioners generally cost between $900 to over $5,000 depending on the model and the retailer you purchase through. It’s also important to keep in mind any potential installation costs that you may need to fork out to ensure the unit is properly connected and installed in your home.

Is a Panasonic air conditioner worth the money?

Yes! Panasonic was right in thinking that the air conditioner would become an incredibly important appliance, and it’s evident that the manufacturer has put time and effort into making its air conditioners the best they can be. With features like intelligent sensors, shut-off capacities, and shower cooling technology, it’s easy to see why Aussies love Panasonic in the hotter months. While not a budget air con brand by any means, Panasonic has cemented its air conditioning pedigree in Australia. Available in a wide variety of configurations and power capacities, there’s a Panasonic air con out there that’s right for you and your home.

What do customers think about Panasonic Air Conditioners?

In 2021, Australian customers gave Panasonic 4 out of 5 stars for overall customer satisfaction for air conditioners.