Finding ways to cook healthy food without sacrificing taste can be tough. Oven cooking usually requires adding oil or butter to food to stop it from sticking or drying out, which makes it hard to avoid fats. Boiling can boil away the taste and nutrients, and can only work with certain foods.

Steaming is a healthier way to cook because it preserves more of the taste, texture, and nutritional value of foods. However, steaming over a stovetop can be difficult. It’s hard to regulate the temperature, making it easy to over-steam and end up with a soggy, tasteless mess. It’s also harder to steam a lot of food without having to cook in multiple small batches.

There’s an easier way to steam without stress – use a steam oven! Professional chefs and bakers have been using steam ovens for years, but they’ve only recently begun entering home kitchens. Should you get a steam oven for your kitchen? Read on to find out the pros and cons of steam ovens, and why they’re becoming more and more popular.

What is a steam oven? 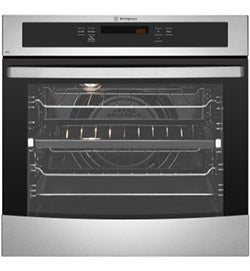 Steam ovens are ovens that use hot pressurised steam to cook food. They can be purchased as either installed ovens, or as smaller microwave-sized countertop appliances. There aren’t many countertop steam ovens available on the Australian market – most are wall-mounted types.

You can cook almost anything with steam – even muffins! Steam ovens work particularly well for delicate foods, such as scallops and croissants. They’re great for cooking vegetables, fish and meats, and adding moisture back into leftovers. Plus, using moist heat instead of dry heat also means you won’t be burning anything!

How do steam ovens work?

Regular ovens work by heating the air in the oven using a heating element. Steam ovens work by boiling water into steam, which then circulates around the food and heats it. This retains moisture in the food. As water is a better conductor of heat than air, steam ovens can cook faster than regular ovens.

Most steam ovens have a removable water tank, although some higher end models can be connected to a water line. When the oven is turned on, water is fed into a reservoir where it is boiled into a cloud of hot steam. Steam ovens have a valve to release steam pressure, much like a pressure cooker or kettle.

There are two broad types of steam oven:

Different steam ovens can have different temperature ranges, usually from 100°C to 300°C, but some can go even higher.

After each use, the oven should be wiped out and the reservoir emptied. Steam ovens also require regular descaling.

Steam ovens stop food from drying out, which means juicier food, flakier pastries, and softer bread. It can even cook rice, which is something a conventional oven can’t do.

The key drawback to a steam oven is that it can’t brown food. Food cooked using a steam oven will be moist but pale. You can get around this by finishing food off on your cooktop after using the steam oven to get that sear, crisp or caramelisation. This keeps the benefits of steaming while still getting your preferred texture. Another option is to use a combination steam oven.

What is a combination steam oven? 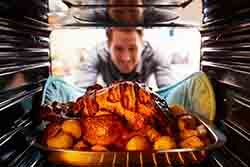 Combination steam ovens combine steam functions and regular fan-forced heat in the same appliance, giving you the best of both types. These are popular choices as you can get the health benefits of steaming, while also being able to produce that golden roast finish.

A combination steam oven is a more versatile choice, enabling you to cook using a wide range of methods without the fuss of using multiple appliances. They are sometimes marketed as ‘combi-steam’ ovens.

Why are steam ovens healthier?

Cooking using a steam oven produces a moist texture and retains more nutrients compared to other types of cooking such as boiling and baking. Many nutrients, such as folic acid and vitamin C, are easily damaged from cooking heat.

As you don’t need to add cooking oil, butter or a salty broth to keep food moist like you do when using the dry heat of a conventional oven, cooking with a steam oven allows you to cook food with a lower fat content.

How much do steam ovens cost? 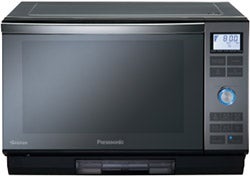 The range of countertop steam ovens available on the Australian market is quite small, but it’s worth keeping an eye out as more are likely to appear as the devices gain popularity.

One brand supplying Australia is Panasonic, with its combination steam microwaves integrating steam, grill, roast, bake and regular microwave functions in the one appliance. This type of cooking appliance is likely to cost around $700.

What are steam ovens good for?

What are steam ovens bad for?

Should I buy a steam oven?

The average person probably wouldn’t get a whole lot of benefit out of a steam oven that couldn’t be achieved using other, cheaper steaming tools and appliances. However, if you like to steam regularly and in large volumes, getting a steam oven may be a great choice for you.

Whether you purchase a steam oven or not, it could be worth exploring new ways to add more steamed food to your diet.