Advertisement
Have you received an estimated electricity or gas bill? It’s not uncommon for energy companies to simply guess how much energy you’ve used over the last month or quarter, possibly meaning you’ve been charged for power you didn’t even use!

In this article, Canstar Blue discusses why energy retailers estimate your bills and what can you do to avoid it.

Why has my energy usage been estimated?

If you have an analogue electricity or gas meter, then a meter reader will have to come out to your property each billing period to read your meter and record how much energy you’ve used, in order for you to receive an accurate bill. If they are unable to access your meter – say, because of a dog or locked gate – the meter reader will leave you a note to explain and you will be charged for an ‘estimated’ amount of usage. Take, for example, the notice below received after a brown snake prevented a meter reader from accessing a meter in NSW.

Found this note on the meter box this morning. Only in Australia pic.twitter.com/9L5xOG8pcf

Who is responsible for reading my meter?

Previously, your electricity and gas meters would be read by a meter reader employed by your local energy distributor, the company responsible for the network infrastructure in your area. However, new rules have since been introduced, which state energy retailers are now responsible for appointing metering coordinators. These metering coordinators are in charge of undertaking metering services on behalf of retailers, including installation, repairs and general maintenance. 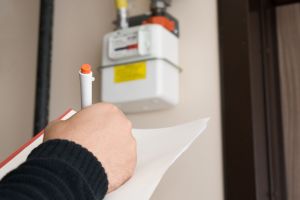 In addition to receiving an estimated bill because the meter reader couldn’t access your property, you could also get estimated bills if you choose to pay monthly rather than quarterly. Having a meter reader visit your property costs money, so it’s unrealistic to expect someone to swing by every month to take a reading. In this instance, you will likely have an accurate reading and settle the difference (i.e. if you have paid too much or too little) every quarter.

You may also receive an estimated bill if you are switching energy providers. Previously, in order to switch energy companies, customers had to wait until a final meter reading was carried out, before their account was able to be fully transferred. Under new switching rules however, an electricity account can now be finalised and switched over to a new provider using an estimated bill. Similar to receiving a monthly bill though, if your old provider re-calculates your final reading with a meter read after you’ve switched, you may end up having to settle the difference of your final bill with them at a later date.

What if I get a smart meter?

If you have a smart meter installed, your electricity usage information is fed digitally to your distributor and there is no need for a meter reader to physically visit your property, or for you to submit your own reading. This means that smart meter customers will never receive an estimated bill.

How can I tell if my bill has been estimated?

If a meter reader can’t access your meter, you will be left a note explaining that your electricity provider will be provided with an estimated usage figure. If your usage has been estimated, you should see an ‘E’ next to the usage figure on your next electricity or gas bill. Depending on the retailer, there may also be a notice explaining that the bill has been estimated. If you have received an actual meter reading, you will see an ‘A’ next to your usage figures, as per below.

How are energy bills estimated?

Distributors don’t simply pass on an arbitrary usage figure for your electricity retailers to charge you. Your estimated electricity usage is based on previous billing periods, your household’s usage around the same time last year, and the average energy usage for that area. If there is no historical data on your electricity account with your provider (i.e. your a brand new customer) then most retailers will base your estimate on a similar customer’s average energy usage over the same time period.

Will I have to pay more with an estimated bill?

While it shouldn’t cost you more in the long term, if you have found one monthly bill to be noticeably higher or lower than your last monthly bill, an estimated bill could be the reason. Some energy retailers set monthly billing as their default option and declare how much you will be charged in monthly estimated bills in their Energy Price Fact Sheets. It’s very important to read these documents before agreeing to a new energy plan. Some retailers even allow customers with monthly billing to submit their own meter readings to ensure accurate bills all the time. This may take a bit of effort on your part, but could mean you avoid any shock settlements bills at the end of the quarter.

What to do if you disagree with your estimated bill

Receiving an estimated energy bill is pretty frustrating, especially if you think your bill is higher than it should be. So what should you do? Unfortunately, there’s not much that can be done in this instance, other than making sure that your meter is accessible for next time. The next time your meter is read, your retailer will check and correct your account based on whether you’ve been charged too much or too little. If you were overcharged on your estimated bill, then your next bill based on actual meter readings will be proportionately cheaper.

If you don’t want to wait for your next meter read to correct your account balance, your retailer may also allow your to submit your own meter reading to them. From here, your retailer can revise your previous bill and send it out to you. Any credits can then be carried over to your next bill. If you’ve received multiple estimated bills, some retailers will even revise the bills from a couple months back too. Meters should be read at least once every 12 months to ensure your are only paying for the energy you have used. If you have received multiple bill estimates it might be best to get in contact with your provider and organise a meter read.

How to avoid estimated bills

There are a few simple steps to ensure you don’t receive an estimated bill:

What happens if you miss several meter readings in a row?

At first you will receive several estimated bills in a row, which possibly means you’re paying too much for your energy. Again, this can be corrected once the retailer has access to an actual reading. If your distributor has tried and failed to access your meter three or more times in one year, then your electricity account may even be closed. Retailers and distributors will make every effort to organise a meter reading before closing an account.

Although meter readers can usually be relied on to do their job properly, if you suspect a meter reader was simply too lazy to check your meter, contact your electricity retailer immediately. The retailer can organise a new meter reading with the distributor, possibly free of charge if it wasn’t your fault that the meter wasn’t read.