Two in five Australian shoppers (40%) are willing to spend more than planned on groceries – up to $74 extra or twice the required $30 minimum spend – to redeem collectables, according to a survey of more than 1,500 supermarket shoppers.

This is despite Australia experiencing record high inflation, predicted by the government to peak at 7.75% in December. Rising inflation has seen prices for basic grocery items jump more than $6, putting pressure on families and their weekly shop.

Coles and Woolworths have been head-to-head in the collectables war for several years to shore up their market share. Customers typically have to spend $30 or more in one transaction to receive a free supermarket collectable.

“This is the new normal of grocery shopping. Not only do supermarkets know these promotions work for them financially, but consumers are now starting to expect these types of value-add incentives for shopping at a particular store,” said Canstar Blue’s Home & Lifestyle Editor, Megan Birot.

“The issue here is that we’re seeing a shift in consumer behaviour with shoppers now buying into the collectables frenzy and spending more money at checkout in between weekly food shops to receive small trivial knick-knacks. That’s where people should consider whether collectables are a value-add or just clever marketing by supermarkets to get us to spend more.” 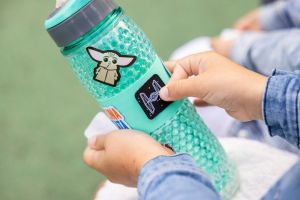 Our survey found a small number of Aussies remain skeptical (9%) and don’t buy into collectables campaigns that encourage extra spending.

Woolworths is currently running a ‘Fix-ems’ campaign, that sees customers receiving an adhesive fabric token of characters or symbols from the Disney, Pixar, Marvel, or Star Wars franchises. Coles is running the Magical Builders collection, made up of Harry Potter characters that fit into cardboard scenes, sold separately.

Despite the fact that collectable characters are from franchises aimed toward younger demographics, it’s not just parents who are being guilt-tripped into splurging some extra cash. Nearly a third of survey respondents (28%) admitted they collect them for themselves, and not for a child in their life. On top of that, 27% of shoppers are willing to switch from their usual supermarket if it means adding to their collection.

Our survey suggests Aussies are slightly more interested in the Woolworths ‘Fix-ems’ collectables campaign with 44% of respondents collecting them, compared to 37% of shoppers collecting Coles’ Magical Builder characters.

High-end phones being sold for cheap in Belong sale