When the NBN was first being spoken about in Australia, it was said to offer incredible speeds and completely revolutionise our access to the world wide web. Finally, the next-gen broadband network is approaching completion, despite delays and issues across the country, with 93% of Australians set to be covered by the end of 2020.

But with increasing demand because of improved consumer technology – and streaming – the need for speed has already exceeded the predictions from back when the NBN first started to roll out. The reality is, the download and upload speeds you can achieve at home are at least in part dependent on the type of NBN connection you have.

That’s why we’ve produced this guide to NBN connection types, as we reveal the best NBN type for speeds and what you can do to improve the speeds you get through your connection.

What is the fastest NBN technology?

Fibre to the Premises (FTTP) is generally considered the fastest type of NBN in Australia as it involves a fibre-optic cable running directly to your property, where it is met with a connection box. This is different to other NBN types where the fibre-optic cables only go as far as the local node, where existing copper wiring completes the journey to your home.

After Fibre to the Premises, Fibre to the Building (FTTB), Fibre to the Curb (FTTC) and Hybrid Fibre Coaxial HFC) NBN connections should deliver the best and most reliable speeds.

Unfortunately, households generally don’t get to choose which NBN connection type they get, as this is decided by the National Broadband Network. This has made the NBN something of a postcode lottery. It’s estimated that about two million Aussie households are connected to the NBN via Fibre to the Premises.

What is the fastest NBN speed?

The fastest available NBN speed is NBN 1000, or “Ultrafast NBN”, however only a handful of providers offer this, such as Aussie Broadband, Kogan and Vodafone. NBN 100 is often thought of as the fastest NBN type, but this is only because it’s available in more places, as NBN 1000 can only be purchased for FTTP and select HFC types, which you can read more about below.

Here is a guide to the types of NBN connections and how well they perform when it comes to typical speeds.

Fibre to the Premises (FTTP)

Fibre to the Premise is the fastest type of NBN because it takes super-fast fibre-optic cables all the way to your home. According to the ACCC, Fibre to the Premise NBN connections typically operate at 89.1% of the maximum speed available during the evening peak. This means speeds of up to 90Mbps should be available on mainstream NBN plans.

Fibre to the Curb (FTTC)

Fire to the Curb is one of the fastest types of fixed line NBN connections, with fire-optic cables taken all the way to a local distribution point in your street. You don’t quite get fibre all the way to your front door, but it’s pretty close, meaning great speeds. According to the ACCC, Fibre to the Curb NBN connections typically operate at 90.5% of their maximum speed available during busy hours. Customers should be able to expect speeds of up to 80-90Mbps with the right NBN plan.

Fibre to the Building (FTTB)

Fibre to the Building (FTTB) is typically only used for apartment buildings, but delivers some of the best fixed line NBN speeds available through the network, with fibre-optic cables running to the node in the building, whereby copper wires take the line to individual apartments. This should put FTTB on par with FTTC speeds.

Fibre to the Node (FTTN)

Fibre to the Node (FTTN) is the most common type of fixed line NBN in Australia. It’s also the most basic – or slowest – given that it mainly utilises existing copper wires to take the NBN from the local node to your home. According to the ACCC, Fibre to the Node connections operate at 80.9% of their maximum plan speeds during busy hours. With the right NBN plan, households should still be able to achieve speeds of 70Mbps or faster.

Hybrid Fibre Coaxial NBN connections use pre-existing cable wires, in most cases previously used for cable TV, to deliver super-fast speeds from the local node straight to your home. This makes HFC one of the better NBN connection types. The ACCC reports that HFC connections typically operate at 89.3% of projected plan speeds during busy hours. Households should be able to record NBN speeds of 80Mbps or faster.

Fixed Wireless is the most common type of wireless NBN in Australia. It uses the same kind of technology as 4G broadband to connect your premises to the NBN via an antenna installed on your property. It’s typically slower than wired types of NBN and customers can expect speeds no faster than 40Mbps.

Satellite NBN goes through the SkyMuster satellite and services regional and remote parts of Australia. Customers need a satellite installed on their property and can only expect modest NBN speeds of up to 25Mbps.

The type of NBN connection at your property goes a long way to determining how fast you can expect your uploads and downloads to be. However, it’s not the only factor that will decide your NBN performance. This is because NBN plans are delivered through four main speed tiers that bring increasing maximum theoretical speeds. These are:

These four speed tiers are available through the different NBN connection types, delivering varying speed performance. If you allow for the assumption that Fibre to the Premises NBN is the best NBN connection type, this coupled with an NBN 100 plan should – in theory – deliver the fastest overall NBN speeds for your home.

What is the fastest NBN plan?

The NBN has four main speed tiers, with NBN 100 delivering the fastest theoretical download speeds. But real-world speeds rarely get close to the maximum potential speeds. Most NBN providers offer plans on the NBN 100 (Premium) speed tier, with prices starting at around $90 per month.

As real-world speeds often fall well short of the advertised maximum speeds, NBN providers must publish what ‘typical evening speeds’ their customers can expect when using the internet during the busy evening period. For NBN 100, typical evening speeds of about 88Mbps are as good as it usually gets.

You may have heard about the ‘secret’ NBN speeds now going mainstream! That’s right, some NBN providers are offering plans with maximum theoretical download speeds of up to 1000Mbps – 10 times faster than the ‘normal’ fastest NBN 100 speed tier. But there is a catch… You can only access speeds like this if you have a Fibre to the Premises connection, or if you’re in the lucky 7% of HFC connections that are currently eligible for ultra-fast NBN. There’s also an NBN 250 speed you can jump on, if you’re one of the lucky few.

Aussie Broadband was the first to launch an ultra-fast residential NBN 1000Mbps plan across the country in May 2020, although telco rival MyRepublic was the first to do so in a specific area of NSW a couple of years earlier. This was part of its ‘Gigatown’ program in Wollongong. The lucky folks with access to these ultra-fast speeds can realistically expect to achieve download speeds of around 900Mbps at best, but this is still much quicker than normal NBN.

Since Aussie Broadband rolled out this NBN type, others such as Kogan and Vodafone have jumped on the bandwagon. Below you’ll find a list of available NBN 250 and NBN 1000 plans, with links to referral partners.

How can I make my NBN faster?

If you’re frequently disappointed with your NBN speed, it’s time to look into your connection type and plan. There are some things you can do to improve your download and upload speeds:

It’s correct to say that your NBN speed is at least partly out of your hands, given that it depends on the connection type you have in your area. However, by choosing the right NBN speed plan for your needs, you should still be able to achieve the download speeds you need. If not, you can take the measures mentioned above to try to improve things. 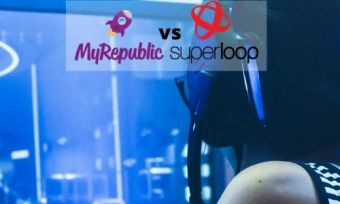