Just as Woolworths has made a name for itself as one of the giants of the Australian grocery sector, its mobile plan offshoot, Woolworths Mobile, is slowly becoming a big name among the smaller telcos. Woolworths relaunched its mobile phone business in 2015 as a Mobile Virtual Network Operator (MVNO) using parts of the Telstra mobile network. The supermarket giant’s previous arrangement with Optus ceased in 2013, and the company then took a two-year hiatus from providing phone services.

Since its relaunch, Woolworths Mobile has become a serious competitor in the low-cost end of the mobile market — with a range of SIM only prepaid, postpaid and phone on a plan options available. The telco offers some pretty straightforward plans at good prices, but what can you expect if you want to sign up with Woolworths Mobile? Read on to find out.

Woolworths Mobile has a range of phone plans that are available either as prepaid or postpaid plans. There are similar price points and data allowances across but some of the inclusions, charges and expiry periods might differ from plan to plan. You’ll be able to choose plans as either:

The cheapest prepaid plan starts at $20, for SIM-only postpaid and postpaid bundled with a phone its $25. If you want a new phone, you can choose from the same three plans to pair with a device, which you will need to pay off over 24 or 36 months. If you choose a 36-month repayment period, you’ll pay less for your new phone and plan bundle each month than you will over a 24-month repayment period, but you’ll be signed up for a longer period.

This means that you can save $50 on your Woolies supermarket shop each month, and up to $600 every year. However, you’ll need to be aware that not all products and services are included.

What are the best Woolworths Mobile plans?

Interested in Woolworths phone plans? Once you’ve made the decision on whether you’ll pick up a prepaid or postpaid plan (or if you want a new handset), it’s time to look at the plans themselves. Most plans go up in $10 increments, with prepaid starting at $20 and going up to $40, while for postpaid (SIM-only and with a phone) it starts at $25 and goes up to $45. There are also three prepaid long-term plans, starting at $65 over 180 days expiry, then $150 over 365 days and $200 over 365 days.

Data varies from plan to plan and if you choose the right time, you might be able to pick up bonus data on your plan. Woolworths also offers data banking on both prepaid and postpaid plans up to 500GB, which is great if you find your data usage varies from month to month.

The following table shows all published Woolworths Mobile postpaid plans on Canstar Blue’s database, listed in order of cost, from the lowest to highest and then by data allowance, largest to smallest. Use our comparison tool to see plans from a range of other providers. This is a selection of products with links to a referral partner.

What does Woolworths Mobile offer?

Although Woolworths Mobile doesn’t offer every extra you’d find on a Telstra plan, there are some good options available with reasonable inclusions for data, talk and text. While there aren’t any entertainment extras available —something you’ll find with many big telcos (and some smaller ones)— Woolworths Mobile offers simple, affordable plans with decent value.

Below is a screenshot of Woolworths Mobile’s current 4G and 3G coverage, represented by the green and orange/brown areas. More detailed coverage information can be found on the Woolworths Mobile website. 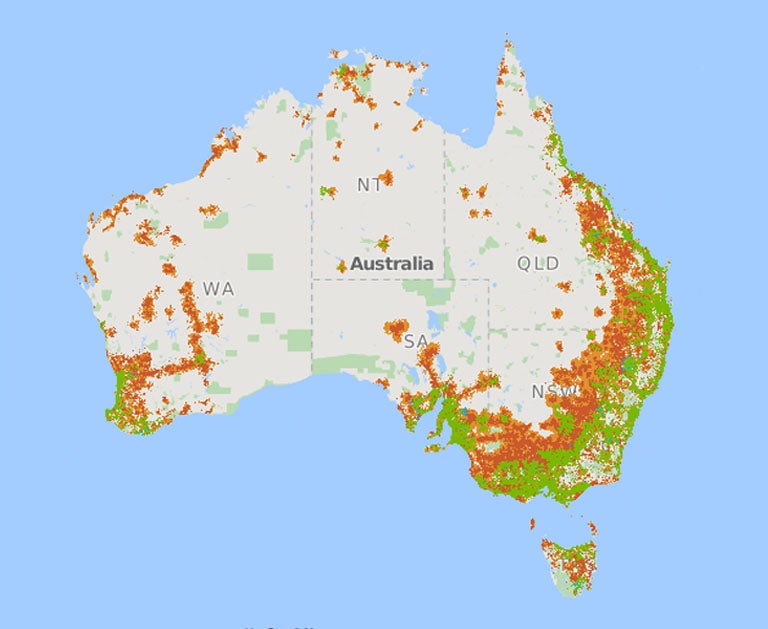 All of the Woolworths Mobile prepaid and postpaid plans come with unlimited standard national calls and SMS. The telco also offers bonus data on plans from time to time so it’s worth keeping an eye out to see if there are any bonus offers currently running.

To get started with a Woolworths Mobile prepaid plan, you’ll need to purchase a prepaid starter pack, which come as $20 (with 12GB of data), $30 (with 30GB of data) or $40 (with 52GB of data) SIM packs. Once you’ve got your prepaid SIM card, you can select your recharge plan, at the same three price points, which all expire after 30 days.

These plans also include unlimited standard national calls and text, unlimited standard international calls and SMS to 22 select countries on $30 and $40 plans, plus up to 500GB of data banking. For data banking, you’ll need to recharge before your credit expires in order to maintain your data bank. You can also gift unwanted data to other Woolworths Mobile customers on both 30-day and long expiry prepaid plans.

If you’d prefer a postpaid plan, there are three month-to-month plans to choose from. Starting at $25 per month for 22GB of data, then $35 will get you 42GB, while $45 includes 65GB of data. All plans include unlimited standard national calls and SMS, and up to 500GB of data banking, which will work automatically if you keep on top of your payments. The $35 and $45  plans also include unlimited standard international calls and SMS to 22 selected countries. These plans are also eligible to give and receive extra gigabytes via data gifting.

Want the latest Samsung or OPPO device? Woolworths phone-on-a-plan options allow you to pick a phone, choose your repayment period (24 or 36 months), and then pick from three postpaid plans, which are the same as the three SIM-only postpaid. It’s worth noting that while the plans are month-to-month with a minimum term of one month, you’ll have to pay off your handset if you choose to cancel your plan before your phone payment period is over.

Looking at the Samsung Galaxy S22? The following table shows a range of Woolworths Mobile’s 24 and 36-month 128GB Samsung Galaxy S22 plans from Canstar Blue’s database, listed in order of cost, from the lowest to highest and then by data allowance, smallest to largest. This is a selection of products including links to our referral partners.

Need some help with your Woolworths Mobile plan or service? The telco offers several contact and support options, including:

How does Woolworths Mobile compare?

Is Woolworths Mobile a good deal?

If you like keeping your options open, but don’t like too many plans to choose from, Woolworths Mobile offers a reasonable selection — but without making you feel overwhelmed from the choice. Plus, none of the plans go over $45 (with the exception of the long-expiry prepaid plans), so you won’t have to pay excessive amounts for decent data or talk-and-text inclusions. When it comes to keeping in touch with overseas friends and family, the inclusion of unlimited calls and SMS to select countries on both postpaid and prepaid plans adds some good value, but it’s not included on the cheapest plans. The 500GB of data banking on prepaid and postpaid is also a very generous incentive, especially if you find your data use differs from month to month.

While other telcos might offer discounts or extra data if you’re willing to commit to a contract rather than prepaid, there isn’t much difference between the Woolworths Mobile prepaid and postpaid plans.

Of course, one of the big draw cards to Woolworths is access to new phones without going to the big three telcos. If you’re looking for a Woolworths Mobile plan upgrade, especially the latest Samsung devices: you might find you get a better deal on a new Samsung with a Woolworths phone plan, than you would from a big-name telco. But of course, it’s always best to do your research first to see if Woolworths Mobile is the right provider for you.