You may have heard of Pennytel before – it initially launched many years ago but was liquidated in 2013 and acquired by telco MyNetFone. Now it’s back with a vengeance and offers postpaid plans utilising the Telstra network. Like other Telstra network Mobile Virtual Network Operators (MVNOs), Pennytel operates with a pretty streamlined approach, offering simple plans with solid value. The brand operates on a postpaid basis and all plans are monthly. Postpaid essentially means you’re never ‘out of credit’ but can be slugged extra for excess data, but more on that later. Review the plans below and see how they stack up compared to other providers.

How does Pennytel compare to other postpaid providers?

Pennytel operates on the Telstra network on a postpaid basis. All plans come with unlimited calls and texts. It has five month-to-month plans to choose from. All plans come with no lock-in contracts, no exit fees and free SIM delivery. Excess data costs $10 for 1GB and unlike other postpaid providers is an optional add-on, instead of automatic. So, here are the plans at a glance:

Pennytel, as a low cost MVNO offers a pretty streamlined approach to the SIM only, mobile space. You’ll find some modest international call inclusions, however the global roaming packs are fairly decent. Excess data is $10 for every additional 1GB. Here’s a brief overview with what the telco offers: 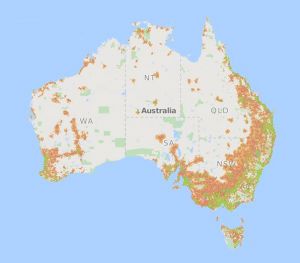 On its website, Pennytel has a coverage checker and also recommends if you are unsure to choose the lowest-cost option for one month to see if the coverage is right for you. There are no setup fees or cancellation fees or lock-in contracts, making it easy to test the network out.

Small in name and price only, this plan has the standard inclusions you would hope for in a base plan, with unlimited standard national calls, SMS and MMS, plus 1GB data per month.

With a little bit more on offer, Pennytel’s Small plan comes with unlimited calls and SMS, plus 3GB data – more than double the data for not even double the price. Once again, plans are month-to-month and on a SIM-only basis.

For $19.99 you’ll get unlimited standard national calls and SMS, plus a reasonable 5GB of data. Not bad for light-to-moderate phone users.

For those craving a little more data, the XXL plan is available for $59 per month, giving you a massive 60GB of data per month. Unlimited standard national calls and SMS is included on this plan, as is unlimited calls and SMS to 15 select countries.

If you want the largest plan Pennytel has on offer, the XXXL plan is what you’ll get. Costing $69 per month for 100GB of data, this plan comes with unlimited standard national calls and SMS, along with unlimited calls and texts to 15 select countries.

Need some help with your Pennytel plan or service? The telco offers several contact and support options, including:

How does Pennytel compare to other providers?

As Pennytel is on the Telstra wholesale network, it can bet compared to other Telstra MVNOs, including:

Apart from that, there are many other telcos on the Optus network and Vodafone network that provide similar coverage in metro areas – the floor is yours.

Is Pennytel right for me?

Pennytel, after its relaunch, comes to the table with five succinct mobile phone plans with fairly solid inclusions for the price. All come with unlimited calls and texts, which is a huge bonus.

Pennytel does boast a call centre with extensive contact hours but provided your plan is working fine, is that really a factor? Pennytel also lacks much in the way of bonuses such as TV or music streaming that bigger telcos can provide. All in all, Pennytel is just one of many worthy telcos, but whether its the right option for you can be best determined when you compare the telco with other postpaid providers.