Apple touts every yearly iPhone release as its best-ever, and on specs alone the company rarely takes a step backward. However, with upstart brands such as OPPO now offering the same level of style, performance and camera quality that Apple has traditionally had on lock, can the all-new iPhone 13 keep up with the competition?

Announced in September, the iPhone 13 is the mid-range option in the 2021 iPhone suite — bigger and pricier than the iPhone 13 Mini, but slightly behind the 13 Pro and 13 Pro Max. The device comes with updates such as the new, faster Apple A15 Bionic Chip, advanced cameras, and the iOS 15 operating system, as well as a brighter screen, smaller notch and better battery.

I tested the standard iPhone 13 over several weeks, comparing it to last year’s iPhone 12 as well as assessing the smartphone on its own merits. If you’re considering upgrading to the newest iPhone — or making the switch from Android to the Apple ecosystem — read on for the Canstar Blue review of the iPhone 13’s design, cameras, and overall performance. 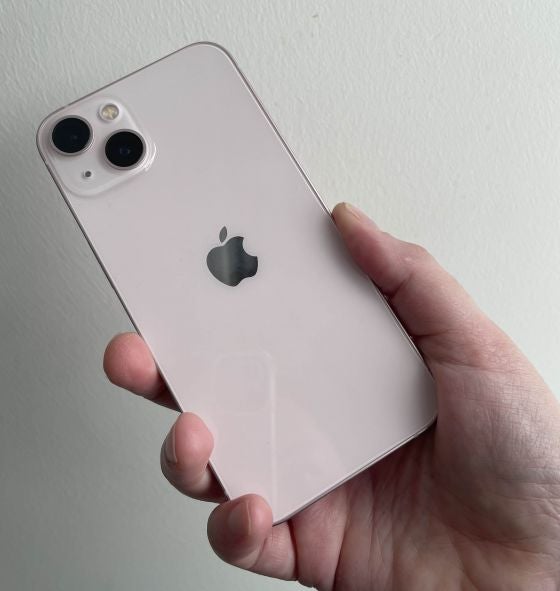 Here are some of the features and specifications of the iPhone 13:

At first glance, the iPhone 13 apes the overall design of its predecessor, the iPhone 12. Both devices offer a 6.1-inch display, with same shape and curved edges, and the same top-left camera house in back. However, look closer and you’ll see several significant updates.

Most noticeable is the rear camera re-alignment, which moves the iPhone’s 13 dual lenses to be diagonally opposite, rather than vertically aligned. It’s not a massive change, and is unlikely to attract strong opinions one way or another; as long as the rear cameras impress, a tweak in positioning is nothing to write home about (especially if it prevents the need to expand the camera house to accommodate the slightly-bigger lenses).

However, this update — along with a shift in the placement of the side volume and power buttons — means you’re unable to re-use iPhone 12 or 12 Mini cases with the newest Apple devices. If you are upgrading from the 2020 iPhone 12, you’ll also need to splash out on a new phone case if you’re looking to protect the 13’s finish and screen from scratches, drops and damage. 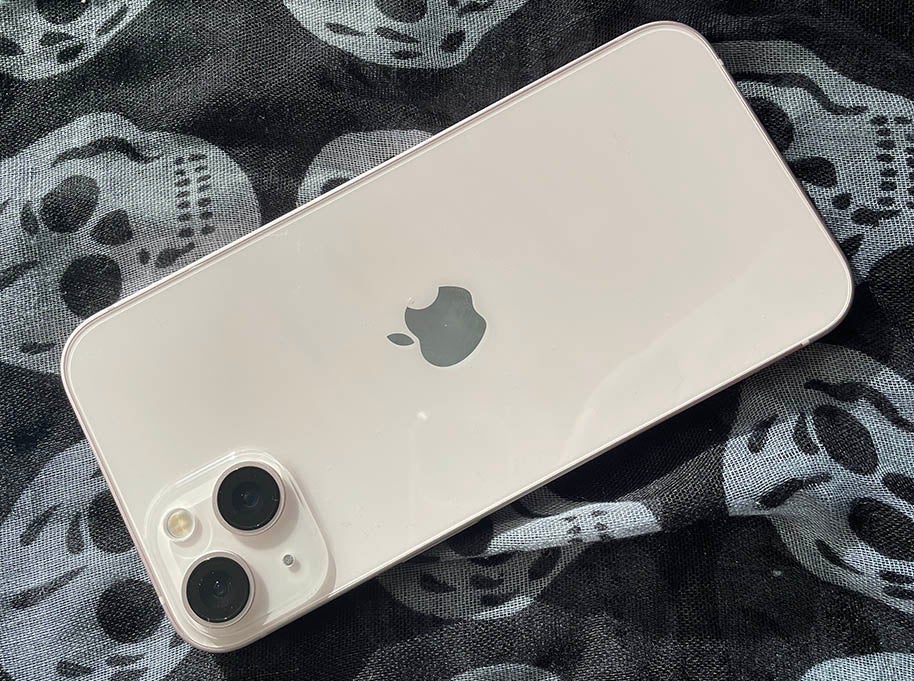 In better news, the phone itself is expectedly pretty; I received the 13 in the new Pink colourway, a light pinkish-cream hue that can easily be mistaken for off-white at a distance. You’ll get Apple’s Ceramic Shield glass coating in front, with ‘aerospace-grade’ aluminium in the back, and the phone itself is water-resistant to a depth of six metres, for up to 30 minutes (always a fun specification to test out!).

Apple has upped the brightness in the 13’s Super Retina XDR display, claiming an improvement of 28% in maximum outdoor brightness when compared to the 12. Stacking the phones side-by-side, we can see a small difference in screens when viewed in the afternoon sun, although you’ll still struggle with direct sunlight. One downside is that the standard 13 doesn’t have the adaptive ProMotion refresh rate introduced in the 13 Pro, which offers smooth scrolling at up to 120Hz. However, if you’re not using your device in a way that relies heavily on fast refresh rates (such as intensive gaming), this may be a barely-noticeable oversight.

The iPhone’s front camera notch has also shrunk slightly since the 12, although this is again a minimal change that means you’ll get slightly more real estate at the very top of your screen. Overall, the iPhone 13’s display doesn’t disappoint; it’s fantastic for watching video, browsing Instagram, and scrolling through your Photos app, and offers excellent colour payoff and quality.

The iPhone 13 features Apple’s new A15 Bionic Chip, which is more than capable of supporting everything the device can do (and then some). The 13 barely misses a step through multi-tasking, gaming, filming, and more, although you can say the same of 2020’s iPhone 12 series. The integration between Apple’s hardware and software is always first-class, and iOS is beautifully complemented by the improvements in the A15.

iOS 15 comes with some minor but useful upgrades, including improved FaceTime audio and video, and the ability to invite non-Apple users to join your FaceTime calls. The new Focus feature is also great, and allows you to switch off notifications and distractions as needed. If you’re a seasoned iOS user, you’ll find the latest version to be a great next step, and those new to iPhone will find the operating system generally intuitive to navigate.

The iPhone 13’s facial recognition is possibly the best I’ve used on a smartphone, and I had no problems unlocking my device with or without glasses on. As fingerprint unlocking can be testy on the best of devices, facial scanning is usually a faster alternative, but Apple still offers passcode unlock for added security.

I’ve never found iPhone battery life to be especially impressive (and some of that can be attributed to spending time reviewing battery-use heavyweights from the likes of Nokia and Motorola). The iPhone 13 does offer a decent upgrade from the 12 in terms of battery and power efficiency, but the difference is subtle in every day use.

Testing the same YouTube stream on both the iPhone 13 and the iPhone 12, both starting at full charge, the newer 13 fell to 94% after two hours. In comparison, the iPhone 12 was down to 91% in the same length of time. If you’re a lighter user, or someone that tends to top-up your phone during the day, you’re unlikely to notice the 13’s better performance, but those who are glued to their phone may appreciate the extra 90 minutes or so of battery life per charge.

Speaking of charging, the iPhone still tends to lag behind in charge times when pitted against its competitors. Charging through the Lightning port via cable is your best bet for a speedier power boost, although the 13 does offer 15W MagSafe wireless charging when you’re on the go.

Related: iPhone 13 Pro review: the most noticeable upgrade in an iPhone

One of the biggest reasons so many of us keep returning to the iPhone, rather than trying out a competing brand, is the premium camera quality. The iPhone 13 is no exception: between the camera line-up itself, and Apple’s integrated software, there’s plenty here to please both amateur photographers and serious content creators.

If you do want the best-of-the-best in Apple cameras, you may want to go straight to the 13 Pro, which includes three rear cameras (including a telephoto lens) and finally sees macro photography come to the iPhone. But the standard iPhone 13’s dual rear camera system and excellent front-facing True Depth camera offer plenty of features to deliver outstanding results in a variety of shooting conditions, even if processing can take a few seconds once you’ve snapped your shot.

Like the iPhone 12, the iPhone 13 comes equipped with a 12-megapixel wide camera and 12-megapixel ultra-wide camera in back. The major upgrades on paper include a move to Smart HDR 4, plus improved optical image stabilisation. Apple says that its double-camera system also captures 47% more light than the 12, and offers much more detail in low-light conditions; comparing shots between the new 13 and last year’s model, there is a slight difference when you’re snapping pics in average or poor lighting.

Outdoor and wide shots are bright and crisp, and the array of customisation options give users plenty of styles and settings to play around with (including Rich Contrast, Warm, Cool, and Vibrant). This is a good way to counter the occasional warm results iPhone can deliver when shooting indoors, and add instant filters to your pics without the need for a separate app, or editing through social media such as Instagram. The rear cameras offer up to 5x digital zoom, although the results at full zoom were fairly average.

Cinematic Mode is also an impressive and fun new video feature; it automatically shifts focus and transitions to follow your subjects on screen. It’s a nifty trick that will work well when filming events such as sports, concerts, and parties, where tracking the action means frequently swapping focus between people or areas within the frame.

Portrait Mode offers the now-standard Bokeh effect on photos, but can be a little hit-and-miss in terms of where focus is directed if your subject isn’t clear. I’m also not a huge fan of the on-screen scrolling wheel Apple has implemented to change lighting, and found some photos were a little too sharp (see below for some examples of Portrait Mode side-by-side).

Overall, if you’ve loved the camera set-up in previous iPhones, you’re bound to be happy with what the iPhone 13 brings to the table. However, some upgrades may not be all that obvious if you’re currently using the iPhone 12: for a bigger leap forward, you may want to consider the 13 Pro or 13 Pro Max.

Should I buy the iPhone 13?

Apple has created another stellar smartphone in 2021’s iPhone 13, and has even managed to lower pricing when compared to last year’s 12 series. If you’re new to Apple’s phones, the standard 13 is a great place to start. While the $1,349 starting price is steep, you can spread this over a payment period, from both the three major telcos and when buying from Apple directly.

If budget is a concern, you could also look to the smaller, lower-priced iPhone 13 Mini, which begins at $1,199 for the 128GB model. Again, this is far from cheap, but the Mini does include all the features of the regular 13, but with a 5.4-inch display.

Outside of Apple, you may find a comparable user experience and camera suite with OPPO’s excellent Find X3 series. But again, you’re looking at a minimum of $1,199 for the Find X3 Neo, and $1,699 for the Find X3 Pro. The budget-friendly Find X3 Lite is the cheapest of the range, at $749, but does come with more mid-range specs.

If you are an existing Apple customer looking to upgrade, you’ll notice a huge difference if you’re moving to the iPhone 13 from older devices. However, if you’re currently using the iPhone 12 range, and toying with the idea of jumping to the 13, I’d recommend sticking with your current handset for a while longer.

While the iPhone 13 is an improvement, there’s nothing here to compel iPhone 12 owners to drop everything and trade in their 2020 model. You’re better off waiting for what we assume will be the iPhone 14: or if you’re in desperate need of an upgrade, going instead to the iPhone 13 Pro or even 13 Pro Max.

Interested in picking up the iPhone 13 on a plan from Telstra, Optus or Vodafone? The following table compares a range of 24-month plans for the 128GB iPhone 13 as published on Canstar Blue’s database, listed in order of their standard monthly cost, from the lowest to highest and then by data allowance, largest to smallest. Use our phone plan comparison tool to compare plans from a range of providers. This is a selection of products with links to a referral partner.

Product used for review/testing was a free sample provided by Apple.