So you’ve just found a new SIM-only mobile phone plan that you’re really pleased with – that’s great, but what if you want to keep your existing number? Keeping your phone number has obvious benefits — it eliminates the need to notify your contacts about the number change, or the hassle of memorising a new number. It seems to be a common misconception that if you change phone plans, and indeed providers, that you won’t be able to keep your current mobile number. If you’re looking at a new phone plan but you want to keep your phone number, read on for some helpful tips and tricks on keeping your phone number when switching telcos.

Can you keep your number when switching carriers?

Have you’ve ever wanted to switch to a new phone plan or provider, but put it off because you didn’t want to change phone number? Or perhaps you’ve wondered how to keep a phone number when changing providers? The good news is that you can switch phone plans to another provider and keep your existing phone number. When you sign up for a new phone plan, providers will give you the option to keep your current number.

In order to keep your current phone number, you’ll need do something called ‘mobile number porting’. This can be done with telcos that are on the same mobile network or even on different mobile networks. In fact, service providers are actually required to allow you port your phone number if you choose to keep it.

What is mobile number porting?

Mobile number porting is essentially switching your phone number from one carrier to the other. However, there is one big thing to be aware of when porting a phone number. Only active mobile numbers can be ported to another provider, so you need to make sure you don’t cancel your current phone plan before signing up to a new plan. There are of course pros and cons to porting a mobile number, so keep this in mind if you’re unsure whether to keep your phone number or not.

How to keep your phone number

You’ll need to have your new SIM pack from your new provider ready, and usually there are instructions on the back of the SIM pack to guide you. The steps are generally the same across all telcos:

That’s it – the provider does all the leg work. You are advised to keep your current provider’s SIM card in your phone until your phone’s signal disappears, or it displays ‘SOS Only’ or similar. Once the signal is lost, simply turn off your phone, insert your new SIM card and restart your phone.

If you don’t see a loss of signal straight away, or you don’t see your new phone signal, don’t panic. The time it takes to port a number varies from telco to telco, and it also depends on the hour of day. However if you feel you’ve been waiting for a while, there may be a couple of answers and solutions.

How long does it take to port a mobile number?

It depends — anywhere from less than an hour, up to seven business days. While seven business days might seem like a lot, it all depends on which network you’re porting from. There are three networks in Australia: Telstra, Optus and Vodafone. While there are a bunch of great mobile virtual network operators (MVNOs) to choose from, the fact is they all use wholesale versions of these three networks, which can make things a little problematic, even when porting between providers on the same network.

Why is same-network porting an issue?

It’s a bit of a mystery, but when porting from the same network, that same network then has to manually configure your new number to your new MVNO. In comparison, this happens automatically if transferring from one network to another, such as from Telstra over to Optus.

Various telcos say on their websites that porting can take up to five business days, which is obviously a long time to be without a phone number. All of this raises the question: is there an easier way?

What happens to my old mobile phone service?

Once your number is ported, and with your new plan activated, your old mobile service will be cancelled. The good thing about porting your mobile number is that the providers themselves handle the transition, so there is very little for you to worry about beyond potentially being without service for the time when your number is being ported to your new carrier. If you decide to take a new number instead of porting your old number, you will need to cancel your current phone plan yourself.

If your old plan was prepaid, the remainder of your inclusions for that expiry period will be forfeit. For old postpaid plans, depending on what time in the billing period you cancelled, it’s likely you’ll be sent a final bill from your old telco that you’ll need to pay. Depending on your contract, that bill could also include any early termination fees, and any remaining handset charges if you had a mobile phone on a plan.

How to Prevent Porting Delays 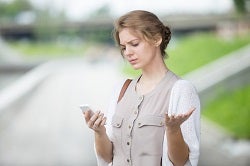 One way to get around porting delays is to avoid going from your current network to an MVNO that uses the same network. However, this is not always convenient, because you may well like the network you’re currently on, or live in an area where there is only one network available or with reliable coverage. Also, if you’ve seen a great-value phone plan that’s perfect for you, you might not want to compromise on a deal simply for potential porting issues.

One of the easiest ways to work around this is to buy a cheap prepaid SIM from another network, port your number to it, then port out again to your provider of choice. The total time spent porting should ideally be no longer than a few hours or so.

As an example, if you’re on the Optus network and wish to switch to another plan on the Optus network, you would need to either port to a Telstra or Vodafone SIM and vice versa. Cheap SIM cards are available from $2 and can be found in all the major supermarkets, such as Coles and Woolworths, not to mention online. So, while you will need to pay a few dollars to work around the lengthy porting times, it could be money well spent.

However, do keep in mind that some providers may require a minimum recharge amount before you can activate a prepaid SIM and port your number over. This is usually around $10, so you may want to double check activation requirements before you try porting with a cheap SIM card.

A prepaid workaround can require a little legwork, but it’s certainly better than waiting for a week for your number to be ported. However, this won’t work if you have already tried to port and your phone number is still in the process of switching over. The best way to avoid this is to be prepared  — porting to another network before you port to your new phone plan can prevent some headaches later on.

Another thing that could prevent timely number porting is if your identification information is incorrect. Upon application of your new phone plan, you’ll need to make sure your details match that of your current phone plan. Some steps you might need to take include:

Ensuring your information is correct, and that you are porting from a different network, are two of the simplest ways to guarantee a timely porting experience.

One other thing that may delay your porting is the fact that porting services from the networks will generally run on set hours:

If you port outside these hours, this means you won’t be able to be transfer your number until you’re in the next porting window. For example, if you go to port at 7pm on a Saturday, you may not get ported until Monday at 8am. If Monday is a public holiday then you’ll probably have to wait until Tuesday. While there have been some cases of customers being ported outside these hours, to ensure the best results, make sure you’re porting within an active timeframe.

If you’re interested in switching phone plans, the table below shows a selection of month-to-month postpaid plans from Canstar Blue’s database with a minimum of 10GB data, listed in order of advertised standard cost, lowest to highest, then by data allowance, largest to smallest. Use our comparison tool to see a wider range of plans from other providers. These are products with links to referral partners.

Is porting my number worth it?

Porting your phone number is definitely worth it when done correctly. Despite all the talk about porting nightmares, if you take steps to ensure you do it correctly, you’re likely to be all done in just a few hours. The steps include:

Porting is a simple task, but the smallest issue can easily draw the process out by ridiculous amounts. If you’ve been waiting an unreasonable amount of time and the steps above do not work, you’ll need to get in touch with both the telco you’re leaving and the telco you’re switching over to. While it may be frustrating, the convenience of keeping your phone number may ultimately outweigh the wait times, especially once you’re on your new phone plan of choice.