For some Aussies, the ‘Mighty Ducks’ may be the only point of reference when it comes to ice hockey, while for others, the National Hockey League (NHL) is a way of life. The stick tricks, big hits and lightning-quick pace of the game makes for entertaining viewing, although for Aussie fans, catching your favourite team hit the ice can be a challenge.

As with most American sports, time zones can be the biggest roadblock to watching, so where can you turn for all your NHL action without sacrificing your sleep schedule? Canstar Blue shows where you can catch every goal, as well as every time the gloves come off, to get your ice hockey fill.

Offering both live coverage and on-demand replays for when you can’t get to the TV in time, Kayo will show multiple NHL games per week during the regular season. For those who like to stick around for the whole season, Kayo also offers coverage of the Playoff Rounds, Conference Finals and Stanley Cup, meaning you won’t miss much of the action when it comes to the big games.

In addition to all your NHL needs, Kayo also has on-demand replays of the Australian Ice Hockey League, with highlight coverage throughout the season, meaning you can catch all the big plays and moments of your local league. If hockey is your thing, Kayo also has coverage of Australian field hockey, including the Oceania Cup and FIH Pro League.

Shown through ESPN – which is available as part of the Sports Package – Foxtel showcases multiple NHL games per week, as well as coverage of the Finals series to help you get your ice hockey fill throughout the season. You can also stream live or catch replays on-demand. 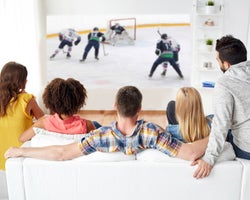 The NHL’s own broadcasting service, NHL.TV, may be the option for those who can’t afford to miss a single second of the ice hockey season. Streaming every game of the regular season and Playoffs live and on-demand, NHL.TV is compatible with a variety of devices, including Apple, Android, Xbox, Google Chromecast and PlayStation, meaning you’ll get your fix regardless of what hardware you’re running.

NHL.TV also includes Mosaic View, which allows you to follow up to four games on just the one screen, with multiple camera angles available for your viewing preference. You’ll even get DVR, which means if you blink and miss something, you simply have to rewind to watch the action unfold.