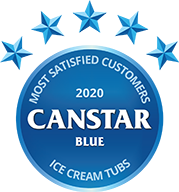 Golden North has scooped Canstar Blue’s award for ice cream tubs for the third year in a row, with five-star reviews from customers on taste, consistency, variety, packaging and overall satisfaction.

On a scorching summer’s day, there’s nothing like a big bowl of ice cream to cool you down! And with non-dairy, gluten-free and nut-free options now widely available, almost everyone can indulge with this special treat. But with so many options to choose from, which ice cream brand serves up the best blend of taste and value? The supermarket freezer aisle is packed full of different brands, so which are worth a try?

To help you find out which brand you should be sinking your sweet tooth into, we’ve again surveyed more than 2,000 Australian consumers about the ice cream tubs they have bought and eaten from a supermarket or grocer in the last three months. Survey respondents scored brands on their variety, taste, consistency, packaging, value for money and overall satisfaction. Those which met the minimum required sample of 30 responses are featured in our results. So, what did we find this year?

Golden North has claimed sweet victory in Canstar Blue’s ice cream tubs review for the third year in a row, earning the only five-star rating for overall satisfaction as well as taste and consistency. It also received full marks for packaging, with four stars for value for money and range variety.

Here are the best ice cream tub brands in Australia, as rated by consumers in Canstar Blue’s 2020 review:

While not many of the brands featured in this year’s review received full marks, Connoisseur was still able to achieve full marks for packaging and even beat Golden North on variety. ALDI Monarc similarly managed to steal the crown when it comes to value for money.

So, what is ice cream anyway?

Today is the day you find out you’ve been living a lie! The ice cream you have in your freezer might not actually be ‘ice cream’ at all! According to Food Standards Australia New Zealand, ice cream is officially defined as “a sweet frozen food that is made from cream or milk products or both, and other foods, and is generally aerated”. A food that is sold as ‘ice cream’ must, by law:

This means many of the ‘ice cream’ tubs you buy from the supermarket are in fact confectionary due to the lack of dairy cream they contain. Generally speaking, however, we refer to all products in the freezer aisles as ice cream for the sake of our ratings. You know what we mean… 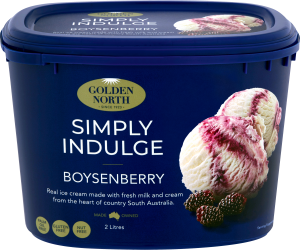 Golden North is proudly South-Australian made and owned, producing ice cream for almost 100 years. Its products are boasted to be 100% Palm Oil Free, Nut Free, with most of its range gluten free. The brand’s core ice cream Simply Indulge range features Vanilla, Boysenberry, Café Cino, Chocolate, Honey, Rum & Raisin, Spearmint Sundae and Vanilla Sundae. Its ‘Good ‘N Creamy’ line is stated to have a low glycaemic index, and is available in vanilla, wild berries and lemoncello flavours. Tub sizes come in various options including 1L, 1.2L, 2L and 5L, depending on which variety of ice cream you’re after.

Blue Ribbon is a Streets brand which has had many Australians tied around its finger (or should we say spoon) for many years with its Classics collection as well as new additions including Blue Ribbon Crafted Ice Cream and Blue Ribbon 308-372 Calorie Tubs.

The Blue Ribbon Classics range is available in 2L tubs and includes 3-in-1 combinations including Neapolitan and even caramel & honeycomb, as well as the usual flavours like vanilla and chocolate. The brand also uses 100% Sustainable Australian cream from several Victorian dairy farms in its Blue Ribbon Crafted range, offering options including cookies & cream, chocolate and its signature buttermilk vanilla in 1L tubs. Lighter alternatives are available, with the Blue Ribbon 308-372 Calorie Tubs, which is said to provide reduced fat ice cream in 460mL tubs. Flavours include raspberry fudge swirl, cookies & cream, creamy chocolate and vanilla bean. 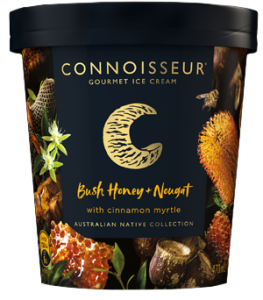 Move over, vanilla and chocolate. Connoisseur doesn’t have time for bland ranges, and instead prefers to mix up unique combos such as mint with cookies, Sumatran coconut with chocolate fudge sauce, Derwent Valley raspberry with white chocolate, chocolate brownie with chocolate custard, and Murray River salted caramel with chocolate coated hazelnuts.

The brand offers several collections such as Crafted by Australia, Australian Native Collection and The Brooklyn Collection. Aside from tubs, Connoisseur also sells ice cream cookies and sticks. The gourmet ice cream tubs are available in either 1L or 450mL tubs.

Bulla grabs life by the horns, making each day sweeter than the last with its Creamy Classics range and Murray Street Ice Creamery collection. So the brand thinks anyway. 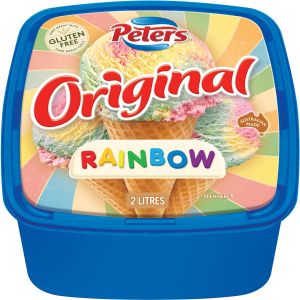 From Drumsticks and Life Savers to Icy Poles and the classic ice cream party cake, Peters is behind some of the biggest brands in the world. Its Original ice cream tub range is no exception, with 2L and 4L tubs available in flavours including vanilla, Neapolitan, chocopolitan and rainbow. Peters also offers a Light & Creamy collection, which includes 1.8L tubs in raspberry ripple and French Vanilla. The brand also provides a lactose free option, which comes in a slightly smaller 1.2L tub.
Peters usually costs between $4.75 and $7.60. 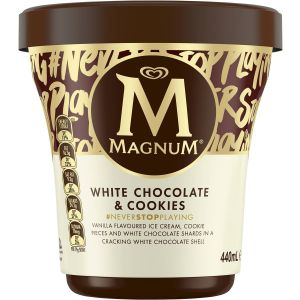 Magnum is another mighty Streets brand keeping Aussies cool and on track with their summer plans. While its products mostly consist of multipacks and individual stick varieties, the brand also creates 440mL tubs in flavours like chocolate ganache and salted caramel. If you miss crunching into the cracking chocolate coating that holds the velvety vanilla ice cream together, the Magnum Classic similarly contains the same chocolate shards (and even the shell) you normally expect from a Magnums.

For a wallet-friendly sweet fix, German supermarket discount chain ALDI has its own line of home brand ice cream tubs for a lick of the price of pints from other brands. The Indulge range includes flavours such as vanilla opulence and triple mudcake. ALDI Monarch will usually set you back just $4.49 for a 1L tub.

Weis is ‘the taste on everyone’s lips, including those looking for a fairly affordable dairy and gluten free alternative. Made in the same state that houses the Big Mango, Queensland, it’s fitting that the brand’s Mango and Cream Bar is its most well-known and supposedly best-selling product.

Weis markets its Real Good tubs as a range that gives people with dairy or gluten intolerances, as well as vegans, the freedom to enjoy ice cream. Its products are made with a variety of real fruits, premium grade nuts and natural ingredients. Everything is free from artificial colours or flavours. Flavours include simply coconut, dark chocolate and boysenberry acai & coconut.

Woolworths is another supermarket to offer its own homebrand line of budget-friendly ice creams. It has a couple of flavours to choose from, including a 2L tub of hokey pokey and a 1L tub of peanut butter & salted chocolate. Products like the hokey pokey are advertised as a reduced fat ice cream with 67% less milk fat than Woolies’ 1L ice cream.

Sara Lee puts a modern spin on traditional desserts we all know and love, especially when it comes to ice cream. Flavours include strawberries & cream, hazelnut chocolate ripple, dulce de leche, rocky road, ultra chocolate, French vanilla and honeycomb & butterscotch. Each delicious pint comes in a 1L tub, which will typically cost you $9 at the checkout.

Some other sweet goodies available from Sara Lee include pies, cheesecakes, puddings, cakes and brownies.

Whether you want a tub for the whole family or just yourself, you can find products in 473ml, 500ml, 1L, 2L and 4L varieties. Similar to Woolies and ALDI, this homebrand range is on the affordable side, with tubs costing between $2.75 and $6.

Cadbury may be the king of the chocolate bar aisle, but did you know they’ve got a stake in the freezer section too? The range includes ice cream versions of Aussie favourites such as Picnic, Dairy Milk (chocolate and vanilla) and Crunchie. These usually come in 1.2L tubs and cost $9 each.

As one of the most well-known and popular brands of ice cream around the world, it seems people can’t scoop up enough of Ben & Jerry’s creative concoctions like Netflix & Chill’d and Half Baked. It has several ranges to choose from, including its Moo-phoria, Cores and regular line. There are also non-dairy alternatives and mini cup options. Ben & Jerry’s are among one of the most expensive ice cream tubs featured in our review, checking out at $12 for a 458ml tub.

When asked what their favourite flavour of ice cream is, vanilla was the most popular choice of survey respondents:

With one in ten (12%) survey respondents admitting to enjoying ice cream on a daily basis during summer, and a similar number claiming it as their go-to snack (14%), picking the right tub can be serious business. Analysis of our research shows that taste is ultimately what makes Aussie tummies happy (33%), while value for money (25%) and consistency (25%) also rank as big drivers of customer satisfaction.

Canstar Blue surveyed more than 6,000 Australian adults across a range of categories to measure and track customer satisfaction, via ISO 26362 accredited research panels managed by Qualtrics. The outcomes reported are the results from customers within the survey group who have purchased and consumed ice cream in a tub from a supermarket or grocer within the last three months – in this case, 2,791 people. 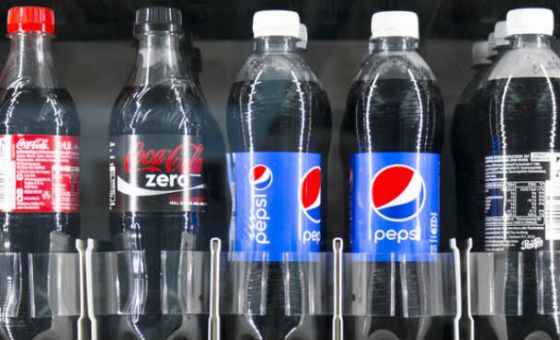 Increasing concerns about obesity and sugar consumption have seen many soft drink brands change their ingredients to low or zero calorie sweeteners instead of sugar, but new evidence suggests that some artificial sweeteners may have …