There are plenty of cheesy pop culture references out there. Plenty of kids under five years of age still believe the moon is made of cheese – but where did that myth come from?

The Fox and the Wolf fable

An old Serbian tale tells of a fox who tells a wolf that the reflection of the moon in a lake is a delicious wheel of cheese. The wolf tries to drink up all the water to get the cheese, but he can’t fit all the water, so he bursts.

This story is first recorded in literature in the High Middle Ages (circa 1000-1300 AD), but the author, French Rabbi Rashi, says the story came from Rabbi Meir in the Talmudic era. The Spanish Jew Petrus Alphonsi then made the story famous in his collection of fables, Disciplina Clericalis. The story was later recorded in French and translated into English as “The Fox and the Wolf”.

Proverb of the century

Ye fetch circumquaques to make me beleeve,
Or thinke, that the moone is made of a greene cheese

The author was saying that someone was trying to trick him into something, not specifically that the moon was made of green cheese. But the saying stuck, and “the moon is made of green cheese” became one of the most popular proverbs in English literature from the 1500s and 1600s.

In 1638, English philosopher John Wilkins said, “You may … soon persuade some country peasants that the moon is made of greene cheese, (as we say).” 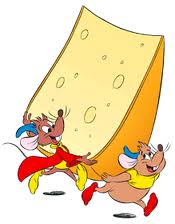 If you’ve ever seen Disney’s Cinderella, you’ll know all about little Gus, the mouse who cannot stop stuffing his face with cheese. But it’s just not true!

And putting a chunk of cheddar in a mouse trap will not solve the problem of mice co-habitating with you.

The Manchester Metropolitan University did a study in 2006 about how food could attract or repel animals. The researchers found that mice were repelled by most types of cheese, because their noses are so sensitive that they can be overwhelmed by strong odours. They would only eat the cheese if they were at danger of starvation. Mice normally chose to eat grains or foods that were high in sugar.

So next time you need to trap little Gus, put some rice or a donut in a box – not some Brie.

A guide to different cheeses