One of 2019’s most eagerly-awaited smartphones is finally here! After months of rumours, leaks, and much anticipation, the Samsung Galaxy Note 10 has been officially unveiled, and is now available to pick up on phone plans or outright.

Samsung is positioning its latest premium handset as much more than just a smartphone. The Korean company is touting the Note 10 as an all-in-one device, perfect for gaming, working, and even editing video. Whether you’re a serious smartphone aficionado, or you’re just looking for a stunning device that’s suitable for all-day play, the Note 10 series is set to be one of the most exciting tech releases of 2019 – and yes, 5G is included.

If you’re dying to get your paws on the Note 10 lineup, you’ll be able to purchase the below devices on plans from Telstra, Vodafone, Optus, and Woolworths Mobile from August 23. You can also pick up each model  unlocked and at full price from selected retailers. Hit the links below to jump to plan and price details, or read on for all the specifications and feature available in each phone. 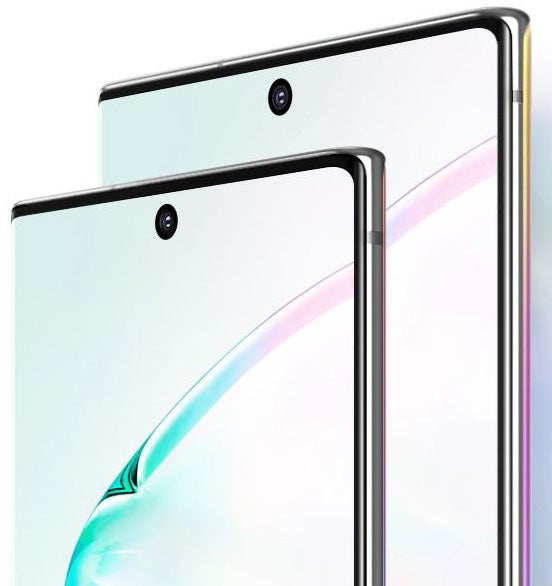 As with all Galaxy Note releases, it’s not a device for the small of hand or short of pocket space. The Note 10 features a 6.3-inch display with minimal bezels – meaning there’s plenty of on-screen real estate for video, gaming, or day-to-day multitasking. Each model includes the ‘hole punch’ in-screen camera lens, plus an aluminium frame with front and back Gorilla Glass, and is powered by a Exynos 9825 Octa-Core processor.

The signature feature of Note handsets, Samsung’s S-Pen stylus, has received a next-generation upgrade. Alongside using the S-Pen as a camera shutter for easy picture-taking, the accessory will also be compatible with a new list of Air Actions, designed to control your phone with a literal flick of the wrist. You’ll also be able to use your S-Pen to convert handwriting to text, and export converted notes and documents to programs such as Word.

After the stunning quadruple camera setup of the Galaxy S10 5G, Samsung has taken a step back in the standard Note 10 model – offering triple rear cameras, albeit with plenty of in-built features. The rear camera rig includes a 12-megapixel primary lens, a 12-megapixel telephoto lens, and a 16-megapixel ultra wide-angle lens. In front, you’ll find a 10-megapixel single lens with auto-HDR and 1440p video recording, plus an all-new night mode that’s ideal for taking selfies in low-light conditions.

As predicted, the Note 10 series has finally abandoned the 3.5mm headphone jack. But if you’re just not into wireless earbuds, you’ll be able to connect your existing headphones to the Note 10 via an included USB-C dongle. Other design changes include a shift in the front camera notch to centre-top screen, plus a reshuffle of the rear camera lenses to a vertical left-side setup.

Battery-wise, the Note 10 features not just wireless and fast charging compatibility, but an all-new intelligent battery algorithm. According to Samsung, the Note 10’s battery will learn how you use your device in order to optimise and save power, meaning you’ll last longer on a single charge. As with the Galaxy S10, the Note 10 series will also feature PowerShare (the ability to use your phone to charge other devices).

The Note 10 will be available in a 256GB storage size with 8GB of RAM. You’ll be able to pick it up in Aura Black and Aura Glow colours, with prices beginning at $1,499 AUD. 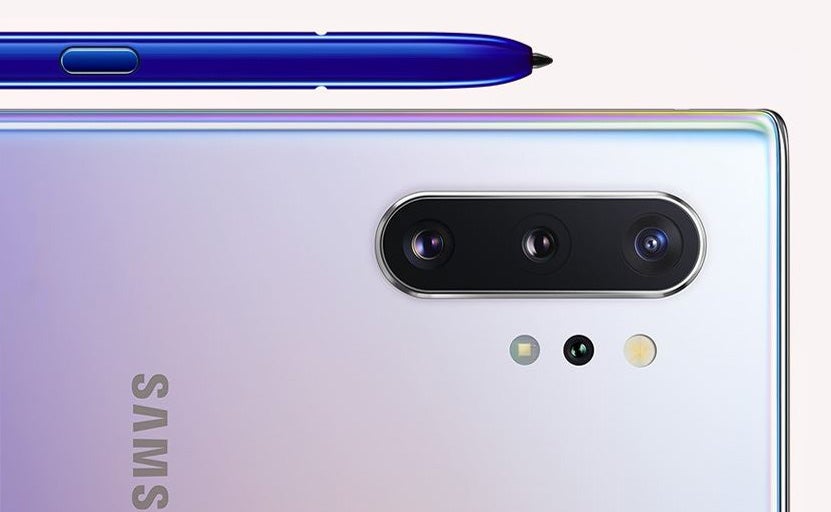 Looking for something bigger? The Note 10+ includes most of the features you’ll find in the standard Note 10, but in a bigger 6.8-inch package. You’ll find the same 256GB storage size, but with an upgraded 12GB of RAM, and a dual SIM/microSD card slot.

The Note 10+ replicates the camera setup found in the Note 10, but with an additional fourth lens. The quadruple rear camera lineup includes a Depth Vision lens that can be used for measuring objects, creating 3D animated GIFs, and enhancing the overall pro-grade feel of the Note 10+ . If you’re a fan of the cameras found in previous Galaxy devices, you’ll love the Note 10 series.

If you want a bigger battery than the Note 10’s 3,500mAh, the Note 10+ packs in a massive 4,300mAh, again with fast charging and PowerShare. Both the Note 10 and Note 10+ are now compatible with super-fast 45W charging, capable of transmitting a full day’s charge in just 30 minutes; however, only a 25W charger will be provided out-of-the-box. If you do want the peace of mind of 30-minute charging, you’ll need to buy a 45W charger separately.

The Note 10+ will also include a hybrid SIM tray, giving owners the option of converting their phone to a dual-SIM device. If extra space is more important to you than multiple numbers, you can instead use the SIM tray for a microSD card, good for an additional 1TB of storage.

In addition to buying your Note 10 outright from Samsung or selected retailers, you’ll also be able to pick up a device on a plan from the major Aussie telcos. All three phones will be available on plans from Telstra, Optus, and Vodafone, with repayment terms and prices varying by provider. Each phone will arrive in stores from August 23.

If you’re eyeing the 5G version of the Galaxy Note 10+, you’ll likely need to go with Telstra for 5G network access. Telstra customers can use 5G in selected areas in major city CBDs, with 5G connectivity available free on all plans through to June 2020. After this date, customers on smaller postpaid Telstra plans – namely the $50 Small and $60 Medium options – will need to pay an additional $15 per month to continue to access 5G.

Telstra customers can also take advantage of the telco’s 5G upgrade offer. From 8 August, through to 23 September, 2019, Telstra customers can take home the 5G-capable Note 10+ for the price of the standard Note 10+, provided they stay connected to a Telstra plan for 24 or 36 months. However, if you do cancel your plan early, this discount is revoked, and you’ll need to pay the full amount outstanding on your phone.