Petrol prices could go up by 25c per litre by the end of September when the Federal Government’s fuel excise tax cut expires. This means more petrol pains are on the horizon for Australians with prices already nearing $2 a litre around the country.

The petrol and diesel excise tax was cut from 44.2c to 22.1c a litre as a temporary measure to ease the cost of living. The halving of fuel excise rates was expected to save Australian households with at least one vehicle about $300 in the six months from March to September (2022). However, the new Federal Government has ruled out expanding the fuel excise cut beyond the September 28 deadline.

RACQ fuel expert Dr Ian Jeffreys said wholesale fuel prices were set for a major hike amid the full excise resumption and the cost of living going up.

“At the end of September we’re looking at an extra 25c per litre added to the price of fuel with the resumption of the full fuel excise and the GST and inflation added to that,” he said.

“The fuel excise is indexed to inflation which increases twice a year and there’s another scheduled increase at the beginning of August, so the fuel excise and wholesale fuel prices will increase significantly.”

Dr Jeffreys said motorists in some parts of the country could benefit from filling up before the excise returns to its normal rate.

“The market is a lot simpler in regional areas so the fuel at the end of September will be cheaper than at the beginning of October so certainly, in those regional markets fill up your tank before the fuel excise increases,” he said.

“The price cycles in capital cities add a layer of complexity, so it will depend on whether the cycle and the excise rate align. In Brisbane for example, there could be a 25c to 30c per litre difference in the price of petrol between the most expensive day and the cheapest day, so it will depend on at which point in the fuel cycle the full fuel excise falls.”

5 tips to save money on petrol 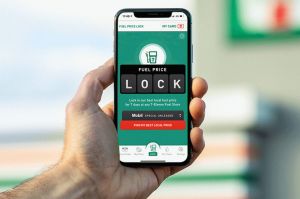 One of the easiest ways to save money on fuel is to use a fuel app. These apps show you which servos offer the cheapest petrol in your area, with prices updated in real-time. Some of the most popular fuel apps include MotorMouth, FuelMap, Petrol Spy, and the My 7-Eleven app which lets you search 7-Eleven stores near you that sell your fuel type at the best current local price and lock that rate for up to seven days.

Most state governments also have their own apps, including FuelCheck (NSW), FuelWatch (WA), MyFuel (NT), and FuelCheck (TAS). Most motoring organisations (i.e. RACQ, RACV, RAA, RAC, etc.) also have their own fuel apps. A recent Canstar Blue survey found that a third of Aussie motorists (29%) have an app that allows them to monitor fuel prices.

The best day to buy petrol will vary from month to month, so be sure to follow the cycle to know when is the best time to fill up. Buying at a low point in the cycle could save you about 30c a litre. The Australian Competition and Consumer Commission (ACCC) provides updated graphs of petrol cycles in most capital cities. Some fuel apps also provide some of this information. 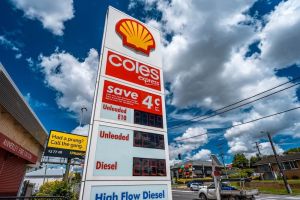 Don’t forget to take advantage of supermarket fuel discounts. Both Coles and Woolworths offer a 4c per litre discount on fuel when you spend $30 or more on groceries. You can redeem the Coles discount at Shell Coles Express stations and the Woolies discount at participating Ampol stations and participating EG/Caltex Woolworths sites. Coles also offers a further 10c per litre discount if you spend $20 on eligible products when filling up at Coles Express service stations (with a maximum 150-litre fuel purchase). Be sure to check that products you buy in conjunction with your fuel discount are worth the spend.

4. Drive further for cheaper fuel but not too far

A Canstar Blue survey found that nearly one in three motorists (27%) are willing to drive further to save money on petrol and 21% stay proactive at chasing lower prices. But, is it really worth driving a few extra kilometres to find cheaper fuel?

It will depend on your car’s on-road fuel consumption, how much you need to fill up (i.e. full tank or half tank), how far you’d have to drive for a better deal and how much you could actually save by getting the cheapest fuel. Petrol prices could vary by about 13.2c per litre on average within one local government area, according to another Canstar research. This means that driving a further 5km-10km for cheaper fuel could equate to big savings over time. However, driving any further than that could result in saving only pocket change or negate any savings.

5. Minimise your fuel use

Saving money on petrol is also about reducing your fuel consumption when you drive. There are some practical things you can do to minimise your fuel use including driving as smoothly as possible and avoiding unnecessary stops and starts, driving with the windows open in summer (and using less heating in winter), maintaining good tyre pressure, removing excess weight and reducing aerodynamic drag, and by minimising your car trips when possible. RACQ also provides other eco-driving tips to stretch your tank further.