Dimplex is a name you may not have heard of in the air conditioning world, but it has a strong presence in Australia with both portable and split system units on offer. While arguably not of the same pedigree as Panasonic and Samsung, Dimplex can make cooling affordable and easy. There is a fairly large range of portable, window and split system air conditioners on offer, starting at less than $500. So if you’re sweating out this summer worried about not affording an air conditioner, less than $500 may provide some relief. Review the Dimplex range below with Canstar Blue.

Dimplex produces a fairly large range of air conditioners. Whether you’re looking for the ultimate cooling solution in a split system air conditioner, a handy portable option or a cheap and effective window-based solution, Dimplex likely has you covered.

As far as effective cooling goes, it’s pretty tough to beat a split system. You may have looked at other brands and thought that over $1,000 for a 2kw system was too expensive, but Dimplex does offer cheaper cooling than some of the biggest brands. Dimplex produces five models in these series:

All split systems come with a 5 year warranty, an LED display, 24-hour timer, quiet operation function, and auto-restart with memory. As for the pricing, a 3.2kw model can be found for under $1,000, which would feasibly be enough for a lounge room or bedroom. And with a 39db operating level, it offers quiet operation too. Despite these cheap prices, Dimplex split systems achieve respectable energy star ratings; the 3.2kw model comes with 3 stars for cooling, and 3.5 stars for heating. 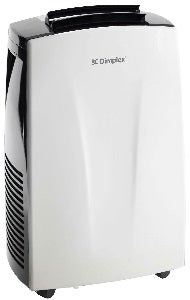 If you’re after a quick solution or if you live in a rental and can’t install anything, a portable air conditioner may be a good bet. This seems to be Dimplex’s bread and butter – at least as far as air conditioning goes – and the brand offers up to seven models. Most models boast dehumidifying power as well, which is handy for humid climates, or if you have a personal library and need to keep books in good condition. All but the smallest model feature this dehumidifying capability. 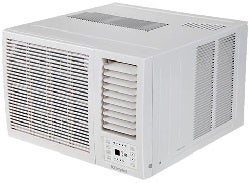 Both models feature a quieter ‘sleep mode’ with three fan speeds, a 24 hour timer, remote control operation and operating temperatures from 18°C to 31°C. While you do get convenient cooling and flexibility of installation, window air conditioners are generally the least efficient of the three categories in this report. These two Dimplex models have only 1.5 star cooling energy ratings. For bang for buck cooling, a window air conditioner may be a good solution, but once again split systems are hard to beat for efficiency.

Is a Dimplex air conditioner worth the money?

Dimplex may not be a household name when it comes to air conditioning, but it does produce a large range of cooling and heating solutions. From split systems, to portable units to window air conditioners, Dimplex has a large range at a cheaper price. Bigger brands often come in at double the price, while a lot of the Dimplex range can be found for under $1,000. The trade-off with this is that customers generally sacrifice tip-top energy efficiency and extra features. While your wallet may be healthier in the short term, in the long term your electricity bills may start to feel the effects of a less efficient air conditioner. In any case, Dimplex represents an easy and cheaper solution this summer; with split systems, window air conditioners and small portable units on offer, there’s likely a model and size out there for most people.