Show Important Notes^* Hide Important Notes^*
* Overall satisfaction is an individual rating and not a combined total of all ratings. By default, brands with equal overall satisfaction ratings are sorted by the mean overall satisfaction score as rated by consumers. You can click the arrows at the top of any column in the table to sort by the results in that column.
^ By clicking on a brand or ‘details’ button, you will leave Canstar Blue and be taken to our referral partner to compare. You agree that Canstar Blue’s terms and conditions apply to this referral. If you click on a brand that our referral partner does not cover, you will be taken to a brand page on Canstar Blue.
Canstar Blue research finalised in May 2021, published in May 2021. 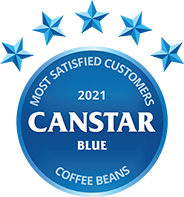 Great coffee begins with great coffee beans. There’s almost nothing better than the aroma of freshly ground coffee brewing in the morning, and whether you’re after a rich, dark roasted coffee with an intense flavour, or something lighter with zesty notes, there’s plenty of brew to go around. But the wrong choice of coffee beans can easily leave you with a sour taste, so if you want the scoop on which brand hits the spot, you’ve come to the right place.

This year, we’ve surveyed more than 940 Aussie consumers for their feedback on the brands of coffee beans they’ve purchased to grind and brew at home, within the last three months. Respondents rated brands on taste, aroma, texture, packaging, variety, value for money and overall satisfaction. Those that met the minimum required survey sample size of 30 responses are featured in our results above.

ALDI’s Lazzio range steamed ahead in this year’s ratings after it received the only five-star review for overall satisfaction and achieved top marks across most of the board. 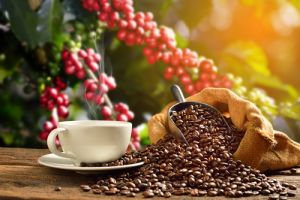 Here are the best brands of coffee beans in Australia, as rated by consumers in Canstar Blue’s 2021 review:

Aussies have been producing ‘brew-tiful’ cups of coffee with ALDI’s Lazzio range, with the supermarket private label rating best in our latest review. It whipped up five stars for overall satisfaction, while most brands scooped up four stars overall. Meanwhile, Caffe Aurora, Vittoria, Bean Ground & Drunk Organic and Gloria Jeans settled on three stars each for overall satisfaction.

But that’s not to say that Lazzio is the only brand worth pouring into your mug. Harris got a whiff of victory after it rated best for aroma, receiving the only five-star review for the category. It additionally scored full marks for packaging, similar to Lavazza and Woolworths when it came to variety.

About the winner – Lazzio (ALDI)

German discount supermarket ALDI has often been in the spotlight for its Special Buys, but did you know the retailer also has shoppers fawning over non-seasonal, everyday stock? Its Lazzio range is one example, offering consumers affordable and apparently great-tasting coffee beans. The private label currently sells what is claimed to be 100% Arabica Fairtrade Organic Certified ground coffee, available in either a Peru or Honduras variety. Prices for ALDI Lazzio roasted and ground coffee start from $4.99 for a 250g bag.

Wondering how Aussies buy and drink their coffee? Our survey found that almost one in three (29%) respondents prefer to make their cuppa at home rather than buying a coffee outside. A fifth of respondents (21%) said they try to buy fairtrade beans, although the portion of people who buy takeaway coffee and use a reusable mug or ‘keep cup’ has slightly declined to 16% (from 20% in 2020).

Meanwhile, 13% of Aussies worry that they drink too much coffee, and 11% regularly drink decaf. Here are more interesting survey findings below:

Canstar Blue surveyed more than 6,000 Australian adults across a range of categories to measure and track customer satisfaction, via ISO 26362 accredited research panels managed by Qualtrics. The outcomes reported are the results from customers within the survey group who have purchased coffee beans (whole beans or ground) to brew at home in the last three months – in this case, 943 people.