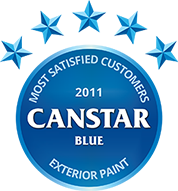 Nearly one third of Australians are playing it safe and using low chemical paint for home projects due to associated health concerns, according to our latest survey.

With most paint manufacturers marketing at least one low chemical option, eco-friendly paints can prove ideal for painters with allergies or chemical sensitivities.

House painting becomes a lot easier when using quality products, and our survey found customers of Solver Paints are the most satisfied when it comes to exterior painting.

Along with Solver Paints, who received out most satisfied customer award for exterior paint, we also rated Dulux, Wattyl, British Paints and Taubmans.

Solver Paints delivers happy customers regardless of whether the painter is working inside or out, as the Australian brand also won our award for interior paint.

While some Australians are moving to low chemical options, others continue to ignore basic health and safety advice, with just under half of our respondents neglecting to wear a mask when using oil-based paints.Our survey also shows a disturbing 19% of Australians dispose of paint down the drain, which can have an enormous impact on the environment.

While Dulux, Wattyl, British Paints and Taubmans all performed brilliantly with four stars each, Solver Paints could not be beaten with five stars for overall satisfaction.

Solver Paints painted a pretty picture on price with five stars for this criteria. Wattyl and British Paints both received four stars for their pricing, while Taubmans and Dulux received three.

Solver Paints picked up another five stars for coverage while Dulux and Wattyl received four stars. British Paints and Taubmans came home with three stars each for this criteria.

For ease of application Solver Paints once again received five stars. However, Dulux, Wattyl, Taubmans and British Paints were not far off with four stars each.

Solver Paints received another five stars for range (including variety of paint colours available, volume of paint, etc.), followed closely by Dulux with four stars. Wattyl, British Paints and Taubmans all followed with three stars each.

In another stroke of victory, Solver Paints took out five stars for paint finish quality. Dulux, Wattyl, Taubmans and British Paints all came close behind with four stars each.

Canstar Blue commissions Colmar Brunton to regularly survey 2,500 Australian consumers across a range of categories to measure and track customer satisfaction. The outcomes reported are the results from customers within the survey group who have purchased exterior house paint in the last three years – in this case, 420 people.