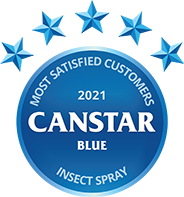 Australia is well-known for its wide variety of wildlife, with plenty to be fascinated by. Unfortunately, Australia is also home to plenty of insects, which have a habit of ruining our picnics and outside lunches, as well as making themselves unwanted houseguests. As a result, many of us turn to insect repellents and bug sprays for protection. But with plenty of options on the supermarket shelves – all claiming to keep your house insect-free, or kill the insects in a flash – it can be tricky to narrow down which one is best for your home. After all, you don’t want to go spraying them around willy-nilly to find one that works!

That’s why Canstar Blue has again surveyed more than 1,300 consumers and asked them to rate the brand of insect spray they’ve most recently purchased and used in the last 12 months. Brands were rated on effectiveness, scent, value for money, packaging design and overall satisfaction. Those that received at least 30 responses are featured in our ratings. So, which brand is best at taking out the bugs?

Aussies have stuck with ALDI Atlas for the sixth consecutive year, with the discount supermarket chain again earning five stars across all rated categories.

Here are the best brands of bug spray in Australia, as rated by consumers in Canstar Blue’s 2021 review:

It’s worth mentioning that Raid similarly smoked the competition in terms of effectiveness, scoring full marks for the category. Black & Gold grabbed the same result for value for money, and so did Pea Beu for packaging design.

Continuing its form from last year, ALDI Atlas has again retained the first position for overall bug-zapping satisfaction, claiming the top result in every category. The German discount grocer stocks a small but mighty variety of multi-purpose bug sprays to target all insect types. Some products from the range include the Atlas Kill & Protect Fast Knockdown Flying Insect Spray (pictured) and the Atlas Kill & Protect High Performance Surface & Cockroach Spray. ALDI Atlas might have what you’re looking for to keep your whole house covered. Available in 300g and 350g cans for under $3, ALDI Atlas is generally cheaper than most other brands.

First Force is a private label of insect control products stocked exclusively at Woolworths. The brand is marketed as offering fast and lasting protection against all types of creepy crawlies including ants, flies, cockroaches, mosquitoes, moths, silverfish, spiders and wasps. Some options from the First Force range include the Multi-Purpose Insect Killer, the High Performance Crawling Insect Killer (pictured), the Insect Control System Kit, and the First Force Super Strength Insect Control Bomb.

Raid provides a large arsenal of aerosols, bombs, bait, automatic sprays and barrier sprays to fight off all the creepy crawlies inside and outside your home. This includes everything from ants, spiders, millipedes and cockroaches to common flies and mosquitoes.

One of the line-ups available from Raid’s aerosol range is the Earth Options Multi Insect Killer spray. This is claimed to use Pyrethrins (extracts from chrysanthemum daisies), which the brand describes as ‘nature’s own protection against insects’, although still contains some synthetic ingredients. The brand alternatively sells the Botanicals Multi Insect Killer from the Earth Options range if you prefer products with a lighter fragrance.

Coles has a number of insect sprays available on the shelves, handy for whatever insect-related problems you might have. Most products come in 300g and 350g aerosol cans, all of which cost under $3, except for the larger 2L 3-in-1 Surface Spray which will set you back $18 (or $12 for the refill).

A brand that many Australians turn to, Mortein has long been associated with an insect-free household, offering a huge variety of sprays to combat all types of insects anywhere you go. Plus, who can forget the ‘face’ of the brand ─ Louie the Fly!

Mortein’s product line includes the Kill & Protect range, which includes the Barrier Outdoor Surface Spray to stop insects from getting inside in the first place as well as an Easy Reach Surface Spray for corners and under the furniture. These two sprays are said to provide continuous protection for up to six months. There are also classic multi-insect killer, flying insect killer and crawling insect killer sprays available. And for those sensitive or worried about bug sprays, Mortein provides low allergenic and odourless varieties, as well as the PowerGard range for rapid action (pictured).

Pea Beu is a well-known brand that has been around for decades, helping families and households stay insect-free. While it doesn’t have the variety of products some competitors have, Pea Beu has an odourless option for households worried about scented sprays.

For those looking to mask the smell, Pea Beu also offers a lemon-scented option, to keep the air fresh as well as insect-free. Pea Beu sprays are available in 350g cans and will set you back about $4.80.

Black & Gold is another private label offering affordable insect sprays. Its product range isn’t as wide as other major brands, with the Fly & Insect Killer (and the low irritant version) being the only options to choose from. Although the prices are competitively set around the $3 mark for a 300g aerosol can. You can find Black & Gold products from IGA stores and other independent supermarkets.

Choosing your weapon of choice

With the wide range of products and brands on offer these days, finding one that will do the job might be an overwhelming task for some consumers, particularly with the added stress of knowing that insects could be running rampant through your house. In Canstar Blue’s latest survey, 13% of respondents said they bought a ‘one-for-all’ insect spray but found some insects still survived, while 8% resorted to using other sprays, such as deodorants, when they ran out of insect spray. However, once respondents found a brand that worked, 37% stuck with it.

Nearly two out of five (36%) Aussies said they try to avoid using insect sprays where possible, with 34% concerned about toxic substances and avoid using it around food, children and pets. A handful of people surveyed alternatively refrained from using insect sprays on certain insects (11%). Either way, bugs aren’t welcome houseguests ─ even a quarter of people we surveyed (25%) admitted to being scared of spiders and other creepy crawlies ─ so, it’s best to find a solution that works for your family. We hope you find this guide useful!

Canstar Blue surveyed 3,000 Australian adults across a range of categories to measure and track customer satisfaction, via ISO 26362 accredited research panels managed by Qualtrics. The outcomes reported are the results from customers within the survey group who have purchased and used insect spray in the last 12 months (this refers to sprays that immediately kill insects) – in this case, 1,331 people. 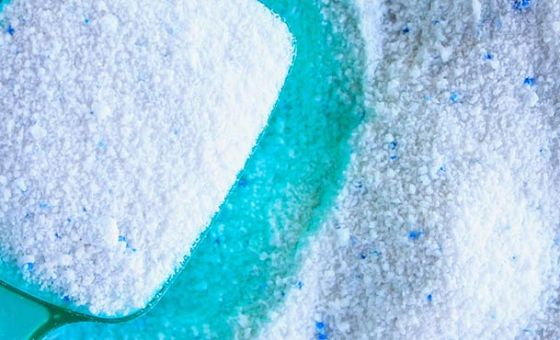 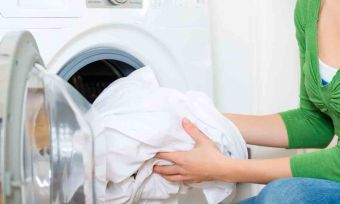 Heat pump dryers are often name-dropped as the best appliance for drying your clothes. So how energy-efficient are they?

Flicking through numerous pages of instructions and becoming increasingly frustrated as you try to build your furniture could become a thing of the past. 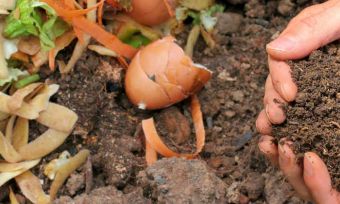 Save your scraps: A guide to composting

Composting isn’t just for farmers and hippies – it’s an easy way to cut down your carbon footprint and save money on fertiliser.