Internet download speeds are the most important measure of how solid your broadband service is. A fast connection will allow you to browse the web at lightning speed, install new programs in a matter of seconds, and allow you to stream and download entertainment without a hiccup. A sluggish connection, on the other hand, can make these things much harder, as well as being a cause of major frustration. Read on as we look at the things slowing your internet speed and offer a guide on what you could do about it. You might even want to try switching providers!

If you’re looking to boost your internet speeds, or simply bring them to a usable level, then there are a number of factors you need to consider. We’ve listed five major factors that affect internet speed and some possible fixes for each one.

How you connect your device to the internet could make a notable difference. The convenience of Wi-Fi has seen its adoption grow rapidly over the last 15 years. While wired connections remain faster, many people find the cables unsightly, or even a hazard. Here are some pros and cons of both methods:

If you’re having problems with your wireless, try switching to a wired connection. Many old or cheap routers can have fairly weak antennas and a limited range as a result, which means your connection will be worse if you’re several rooms away from the router. This problem will be exponentially worse in large houses with many devices all connected to the one router.

Solution – If wired simply isn’t for you, try and find a more strategic place to put your router, where it will service all areas of your house thoroughly. This spot should be:

This reduces the workload of your router and the distances the signal needs to travel.

If that doesn’t work, consider buying a more powerful router. You may even be able to get a new router from your ISP, with pack-in routers standard with many Australian internet plans.

It’s not impossible that your slow internet speed might be because of your device, and there are two main reasons it could be so. The first is if you’re working with an outdated or damaged device, a cheap laptop or tablet you bought years ago. Older devices may have an incredibly hard time keeping up with the websites of today, which feature more multimedia content than ever. What appears to be slow internet speeds may actually be slow processing speeds from your device. Older modems and routers may also struggle be limited by processing, however this is less likely.

The other reason your device could be the issue is malware, or “viruses”. These programs can often get up to worse than merely slowing down your connection, like:

Solution – Replace any unreasonably dated or damaged devices you may be working with, and scan all your current devices for malware using a piece of reputable and thorough anti-virus software. Our tablet buying guide and router buying guide contain information for those looking for new devices.

Just like how the sheer number of cars going to work in the morning will slow down traffic flow, large numbers of people using the internet simultaneously are going to slow down your connection. The same goes for some websites which don’t have large server capacities. If large numbers of people visit the site, the number of requests and the amount of data required can become too much for the servers to handle, resulting in a crash.

Using the internet at peak times, such as in the evenings and on weekends, will likely mean slower speeds than browsing during the day. People who live in a household with multiple people using the internet at the same time – most commonly families with children – are more likely to experience slow speeds if everyone is streaming movies or playing online games, as the network becomes stressed.

Solution – Try to browse during off-peak times, namely earlier in the morning or later at night. It’s obviously not ideal but if you’re desperate for better speeds, it may be one of your only options.

The distance from your exchange also impacts speeds. The following graph portrays the typical fall off in ADSL internet speeds. 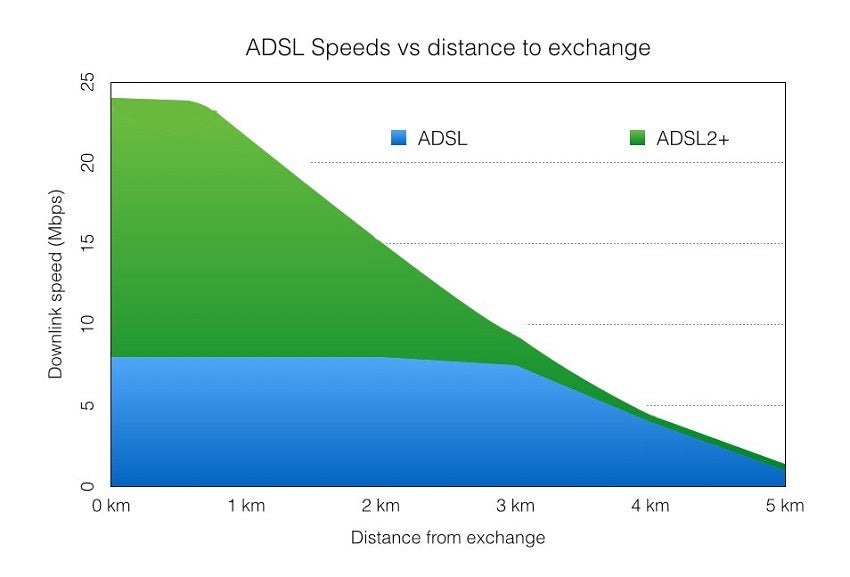 Your broadband speeds depend largely on what type of connection you have. Australia’s urban broadband infrastructure consists of ADSL2 and hybrid fibre coaxial cables, with older areas being served by ADSL or dialup and remote areas by satellite. NBN is also fast approaching many areas, and theoretical speeds on many NBN plans trump that of many ADSL connections. The difference in speeds is compared below:

Solution – Consider changing your ISP. You can start by comparing broadband providers. Some providers, such as Internode, allow potential customers to try their connection before committing to a contract. You can also read customer reviews from users in your area to get a rough idea of the provider’s speeds in the area.

Alternatively, some providers allow customers to pick a line profile for their connection. Typically, this allows for faster speed, at a trade-off with reliability. Give your ISP a call about whether they implement line profiles.

On a side note, it’s worth mentioning mobile broadband. Depending on the coverage in your area, you may have access to the current, faster 4G network, or the older 3G network. Australia’s big towns and cities nearly all have 4G coverage from the major providers, and the network continues to grow. Those in rural areas will typically have to settle for 3G speeds or slower.

So if your internet is appallingly slow, and you’ve tried each of the solutions above to no avail, then maybe consider using 4G on your mobile or your personal hotspot for lighter browsing. Since mobile data is more expensive, it is best not to use 4G for data intensive activities, lest you want a massive bill for excess data use. Mobile connections are also more prone to latency issues and interference from weather, which rules out heavier online gaming and other activities requiring low latency.

If having internet issues, check your connection type, the specs on your device, whether you’re in peak time and if your ISP is having difficulties. If you have followed these steps, you could be well on your way to better internet, and ultimately avoid throwing your computer across the room. They say you never truly know someone until they are faced with slow internet, so new relationships should tread carefully.

If you are still having issues, contacting your ISP’s support team is a good first bet. As internet technology improves over time, keeping up with developments ensures you are maximising your connection’s potential. Unless you are already connected to the NBN, chances are your speed is set to improve when the network comes to your area.