Every year or so, a momentous day arrives for Apple lovers around the world: the announcement of a new iPhone model. In some years gone by, such as 2014, it’s an entirely new model such as the iPhone 6 – two new models in fact. This year however, the announced upgrade from 6 to 6S is less of an upheaval. Apple has still managed, however, to squeeze some impressive new hardware and software into the latest iteration of its flagship product. So what does the new iPhone 6S offer and how do its innovations compare to Apple’s previous iPhone breakthroughs?

With the external appearance being pretty much identical to the iPhone 6, the key changes to this year’s iPhone line-up are under the skin. Apple has upgraded its touchscreen technology with a system it calls 3D Touch, whereby capacitive sensors under the screen can actually detect how hard you’re pressing it. This, combined with new software features in iOS 9, lets you perform a much wider range of actions than simply tapping – you can press lightly on an email or webpage to get a pop-up preview of what’s inside, and then press more firmly to open the item fully; you can even preview some frequently used functions by pressing on apps on your home screen in the same way.

The guts of the iPhone 6 have also had a significant upgrade. Apple’s latest microprocessor chip, the A9, claims 70% faster performance than that of the previous iPhone chip – a pretty huge increase, and one that makes everything from fitness tracking to games just that little bit smoother and slicker. The men and women from Cupertino have also beefed up the iPhone’s two cameras, with the rear-facing one now boasting 12-megapixel resolution and the front camera 5 megapixels in order to make your selfies look as beautiful as possible.

A number of smaller improvements like VoIP support, more 4G LTE frequency bands and faster fingerprint recognition round out a typically impressive package. Despite these upgrades though, it’s definitely not the biggest change that Apple has made to its signature piece of tech; here are some of the iPhone’s biggest changes since the late Steve Jobs first introduced it some eight years ago.

When the iPhone was first launched at Apple’s Macworld Conference in 2007, it revolutionised personal electronics forever. Mobile phones had been around for two decades or so, and Apple itself was well-known for its portable music players and computer hardware. But here was a device which, for the first time, combined all three of those things – and it did so in a small, elegantly designed touchscreen device. The first iPhone set the blueprint for the modern smartphone, and nowadays it’s hard to imagine a modern world without them.

The upgrade a year later to the iPhone 3G also introduced another ground-breaking feature, in the App Store – the first time a mobile phone manufacturer had provided a platform for third-party developers to create software for their device. In 2009 came the 3GS, which saw some key features which we now take for granted; these included a video-capable camera as well as software functions such as cut-and-paste, voice control and a landscape keyboard.

In 2010 came the iPhone’s first major redesign with the release of the iPhone 4. It was slimmer and sleeker than the model it replaced, with a flat back that has become a signature feature of all iPhones since. The iPhone 4 had a new A4 chip and was the device on which Apple debuted their high-resolution Retina display – so named after its claim that the screen pixels were so small, you couldn’t even see them during normal use. It also introduced yet more features which have since become an expectation for every phone, including a front-facing camera, video calling through Apple’s FaceTime app, and the beginnings of high-resolution video with the 4’s 720p recording capability.

The eventual (and expected) upgrade to the 4S saw another camera bump up to 8MP and 1080p video, and saw the introduction of Apple’s Siri voice assistant – a technology which has since been emulated by Google Now and Microsoft’s Cortana.

The second major update to Apple’s mainstay was the iPhone 5, which saw the screen grow up to four inches on a phone which was taller, thinner and lighter than its predecessor. Apple’s new A6 chip was a custom architecture which boasted twice the speed of the previous model; that focus on speed was also evident in the 5’s new Lightning dock connector, a design which was faster than the previous connector as well as reversible. It was Apple’s first 4G LTE compatible device – but unusually for Apple, it was the 5S a year later which really drove the iPhone forward with better technology.

The iPhone 5S was arguably far more futuristic that its predecessor. In addition to the new 64-bit processor, the 5S had two key talking points: on the hardware front came Apple’s Touch ID system – a fingerprint scanner integrated into the home button which could be used to authenticate app purchases and replace passcodes. On the software front was the update to iOS 7, which saw a massive visual overhaul from the previous iteration to a more minimalist design aesthetic, as well as introducing a host of new functions. Once again, we’ve now seen fingerprint recognition and flatter, simpler interface design become widespread on high-end smartphones.

With the iPhone 6 having been out for around a year now and the 6S having just been announced, do you think the new features have lived up to Apple’s track record? Whether you still think the original iPhone was the best or you’re itching to get your hands on the latest version, one thing’s for sure: Apple doesn’t look like slowing down anytime soon. 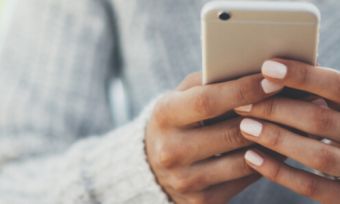