Signing up to a new SIM only phone plan has never been easier, and there are some amazing deals out there. Unlike a lot of other services where costs keep going up and up, with phone plans the value generally gets better and better every year. However, there are still some confusing points about buying a new phone plan, including knowing which type of SIM card you need. In this review, we’ll look at the different types of SIM cards and explain which type you will need. 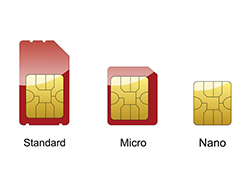 The rise of the modern smartphone has seen three different SIM card sizes emerge, each of which only fits certain models of phones. There are undoubtedly many Aussie consumers who have eagerly opened up their new SIM and tried to slot it into their phone… only to discover that it didn’t fit. So how can you avoid a future day of SIM card frustration? What are the different types of SIM cards out there, and how do they work?

The three different sizes of SIM cards in use are:

You will notice the descending order of size…

The first SIM cards introduced in 1991 were roughly the size of a credit card – much bigger than any in use today! These have since been phased out in favour of the much smaller cards detailed below.

Standard SIM cards are the biggest SIM you’ll see these days, and are mostly used in larger devices which are concerned more with ease of use than saving space. They’re found in tablets, budget mobile phones and other devices with thicker profiles. The Standard SIM card has been around since the late 1990s, and measures 25mm x 15mm – about the size of your top thumb joint.

Micro SIM cards are probably the second-most common SIM card size in use today, and were introduced in 2003. Roughly half the size of a Standard SIM at 15mm x 12mm (but using the same-sized circuit), Micro SIMs are used in many Android mobile phones – particularly those from Samsung. In recent years, micro SIM cards have also started to be phased out in favour of Nano SIMs.

A size which originated with the iPhone 5’s tiny SIM card slot, the Nano SIM size is fast becoming the standard size for new smartphones. The Nano SIM is almost all circuit with hardly any plastic bezel, measuring just 12mm x 9mm, and making it ideal for saving space as modern phones grow ever thinner. Nano SIM cards are used by all current iPhone, LG and HTC models, and even the cheaper models from these and other manufacturers are beginning to use a Nano SIM slot.

Which one should I ask for? 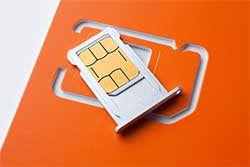 The SIM card you will need depends entirely on your mobile phone. You can find out the size of your phone’s SIM card in several ways, including:

Fortunately, just about all mobile service providers understand your predicament and will send you a 3-in-1 SIM card when you subscribe. The Micro and Nano SIM sizes are contained within the Standard SIM, and all you need to do is pop out the one you’d like to use (i.e. the one that fits).

Fortunately for smartphone users the world over, the Nano SIM is seemingly becoming the de facto standard for modern devices. Perhaps in future, looking up your smartphone’s SIM card size will no longer be necessary! Until then, be sure to order a SIM from your provider which is the right fit for your device.