The world of sports is competitive, but so is the world of sports streaming, with a number of brands looking to help Aussie fans catch their teams in action. But while the market is dominated by a few key players, another contender looks to even the playing field – Stan Sport.

Launched as an add-on to the Stan platform, Stan Sport looks to be the home for all-things rugby union, as well as venturing into other sporting codes. But is it worth signing up to? Find out all you need to know in this Canstar Blue guide.

What is Stan Sport?

Stan Sport is an add-on to the existing Stan platform that will focus on sporting events, matches and highlights. Currently, the platform streams rugby, tennis, and football as its three main sporting categories, but with more sports likely to be acquired down the line.

How much does Stan Sport cost?

Stan Sport will cost an additional $10 per month, but is only available to purchase alongside a Stan subscription, meaning it will cost you upwards of $20 per month to catch the sporting action, depending on which Stan plan you sign up to. Below is a breakdown of the available Stan plans and the features included.

How to watch Stan Sport 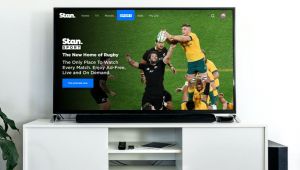 Like Stan, you can also watch Stan Sport on a variety of devices and hardware, including Smart TVs, gaming consoles – including the PlayStation 5 and Xbox Series X – computers and laptops as well as through media streaming devices such as Google Chromecast, Telstra TV and Fetch. If you’re looking to watch while on the go, you can also stream via mobile devices, with Stan Sport compatible with iOS devices running iOS 11+ and Android devices running Android 4.4+.

Smart TV brands that are compatible with the Stan and Stan Sport app include:

Stan also states that if you have a device that doesn’t support live matches, you can still access replays, highlights and mini-matches.

What sports are on Stan Sport?

The main sporting codes available on Stan Sport are rugby union, tennis and football, although more sports may be added further down the line. In addition to live matches, Stan Sport will also have a library of classic matches, highlights and recaps, giving you something to watch in-between seasons.

Rugby union competitions and leagues available on Stan Sport include:

Tennis matches and competitions on Stan Sport include:

Football matches and competitions on Stan Sport include:

Is Stan Sport worth it?

With Stan Sports to be the exclusive home of rugby union, part of the grand-slam tennis and home to UEFA football competitions in Australia, die-hard fans may think that the extra $10 a month may be well-worth it, although if you aren’t already a Stan subscriber, it might be a tougher pill to swallow. However with sports streaming platforms likely to be the new battleground for brands to dominate, Stan Sport may prove to be a competitive option, particularly if it adds more sports to its repertoire. But to catch the current champion of sport streaming – Kayo – it may take a bit more to claim the title, but it’s a good start.

Regardless of how keen you are on your sports, it’s always best to look into all of your options before pulling out the credit card, as you may find a streaming platform that gives you better value for money, or more enjoyment through its catalogue of shows and content.

How to watch The Jungle Cruise in Australia

How to watch See in Australia