Washing machines are pretty darn handy, and when you think about it they’re the unsung hero in the house. They aren’t exactly an exciting appliance by any means, but they sit in the laundry and do their job without complaining. Whether you have a front loader or a top loader, it’s undeniable that most people can’t live without their washing machine. However, what happens when you washing machine gets sick?

After a while, and after many washes, your washing machine starts to build up a variety of icky substances. We’re talking detergent scum, calcium build-up, lint and bacteria from all that clothes washing. This doesn’t just happen in the drum itself – often it’s unseen mess clogging up the pipes and the drainage hoses. This is where washing machine cleaner comes in. There are a few brands floating around that you’ve no doubt seen on supermarket shelves. Canstar Blue reviews various washing machine cleaners and how to clean your washing machine when it gets the ‘flu’.

How often should I clean my washing machine?

Ideally, you should aim to clean both the inside and outside of your washing machine at least once a month or every 30 wash cycles. The process is fairly painless as it involves running a wash cycle and adding a natural disinfectant like vinegar and baking soda or a washing machine cleaning solution, to disinfect and kill bacteria. Bleach can also be used, but this is not ideal as it can leave a toxic residue behind and can clog your septic tank.

How do I clean my washing machine?

Cleaning ‘the one that cleans’ is an important step in maintenance to ensuring your clothes feel clean after a wash and for hygiene in general. The most effective way to clean your washing machine is to buy a washing machine cleaner. They are generally available at places where you can buy washing machines, as well as supermarkets.

Arguably one of the most popular products specifically designed for cleaning built-up residue in your washer is ‘Washing Machine Magic’. It’s available at Coles and Woolworths, and costs less than $10 for 200g. Found in the laundry section, Washing Machine Magic doesn’t require much to be effective, and is made for both top and front loaders.

An alternative is Selleys ‘Scalex’ and works much the same way as Washing Machine Magic. Selleys is known for cleaning solutions and its general handiwork products for around the home. While Scalex is specifically for dishwashers, Selleys states it’s also good for washing machines. It costs around $10 for a 375g bottle.

If you don’t fancy heading to the supermarket, there are some everyday products that may get the job done. They generally revolve around the good old vinegar or bicarbonate soda – the stuff you made volcanoes with as a kid. These products can be used on both front and top loaders.

How do I clean my front-loading washing machine?

Front loaders are particularly susceptible to suds building up, and with all the crud being dislodged, it may suds up quite a bit, so keep an eye on it! For fabric softener dispensers, most of the time they are able to be removed – this way you can place them in the dishwasher for cleaning. For front loaders, also pay attention to the filters, and clean and empty the crud caught up in them as necessary.

How do I clean the rubber seal of a front loader?

This doesn’t require too much elbow grease. Once your empty wash cycle with vinegar and baking soda is complete, just grab a rag towel or damp cloth with soapy water or vinegar, and wipe around and underneath the rubber door gasket until all the leftover gunk is gone.

How do I clean my top-loading washing machine? 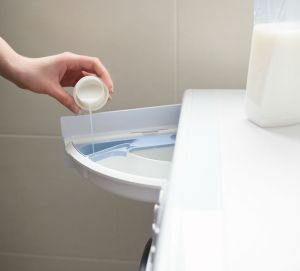 Front load washing machines generally require a bit more maintenance than top loaders, but both kinds require some attention every now and again. Generally speaking, regularly wiping down anything that touches detergent is a good first step.

Leave the door open after use

This allows the drum to air out, and applies to both front and top loaders. Quite often there is some water left behind after a cycle or at the very least some dampness. Leaving the door or lid open allows the drum to dry out, and prevent mould built-up.

Wipe down the rubber seals

As part of the door to front loaders, rubber seals have a tendency to become gross after a while. Some are able to be removed quite easily for a total soak and air-out, but wiping seals down regularly can prevent mould build-up.

Don’t use too much detergent

If you find the directions on the packet leave you with too much sticky residue, you can road test using less detergent. Not only could this leave less residue, it could also be kinder on the wallet. Start off by testing results with half the recommended dose.

Wipe down the detergent dispenser or agitator

The detergent dispenser sees frequent contact with detergent, and in many cases they are removable. If they are removable, giving them a good soak – or putting them in the dishwasher – is a good way to prevent residue from building up. For top load washers, the agitator can also be a good source of crud build-up. Wiping down where the detergent goes is a good way to prevent any residue from becoming problematic.

What causes mould and mildew to grow in my washer?

Front-loading washers tend to be the main victim of mildew because of the way they’re designed. They feature airtight doors with a curved rubber gasket to keep water from leaking out. This is where dirt, soap and excess moisture gets trapped, creating a breeding ground for bacteria, especially in those hard-to-reach nooks and crannies. On the other hand, top-loading machines have a rather loose-fitting metal door that easily allows the tank to dry out between loads.

How do I get the smell out of my front loader?

If you follow instructions and clean your washing machine properly, the funky mildew smell should dissipate pretty quickly. In terms of what you can do every day to prevent bad smells, you should keep the drum dry, leave the washer door open between loads and wipe down the rubber gasket regularly. Having a well-ventilated laundry room can also help with reducing moisture and a dehumidifier can help with the job.

Can vinegar damage my washing machine?

Vinegar is a biodegradable and mild antibacterial acid, made from fermented ethanol (which comes from grains). It’s safe and effective to use for cleaning your washing machine, dishwasher, fridge and other appliances. It’s also beneficial to septic systems and the environment. With that said, vinegar can damage rubber seals over time, which is why it’s important to wipe down the gasket once you’ve completed the last cleaning cycle to remove any residue.

Should I leave my washing machine door open between washes? 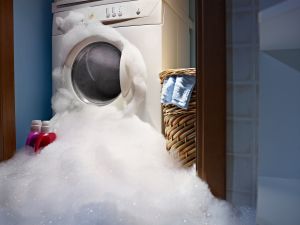 You should leave the door open after every load to allow moisture to escape and prevent the build-up of mould and mildew inside your machine. It’s just as important to remove the wet laundry from your washing machine quickly to avoid that musty smell.

How do I clean my washing machine drum?

Running a hot wash cycle with baking soda or a washing machine cleaning solution should do the trick to remove gunk and soap build-up in the drum. To help keep the drum clean for longer, make sure to check the pockets of your clothes for small objects like coins or hair pins before you put them in the wash. Remove your wet laundry from the drum quickly after each load and leave the machine door open.

How long does a washing machines last?

Aussies typically hold on to their washing machine for eight (for front loaders) or nine years (for top loaders) before upgrading to a new model, according to our latest consumer survey. However, a washing machine can last you the better part of a decade with proper care and maintenance.

Cleaning the cleaner: The final wipe down

Cleaning the humble washing machine doesn’t need to be hard. In fact, the more often you do it, the less residue there will be and the easier it gets. Washing machines don’t demand much of your time or sympathy – they hum away and do the job like a noble steed. However, that doesn’t mean they never need some attention. Often they can get bogged down from the one thing meant to clean your clothes – detergent. Detergent has a tendency to build-up and leave residue in your drum over time, and this can attract dirt and mould.

Overall, your washing machine doesn’t ask much of you, so pay it back by giving it a good clean every now and again. After all, it does have to deal with the whole household’s clothes!