The purchase price is always a factor when buying a new washing machine, but have you considered the ongoing costs? It’s easy to overlook, but your washing machine is a significant contributor to your utility bills, particularly your electricity and water bill. This means the wrong washing machine might cost you big time in the long run.

So how much does your washing machine cost to use and would you be better off buying a more efficient model instead? In this article, Canstar Blue explores the answers to these questions as well as ways you can potentially save on running costs.

How much does a washing machine cost to run?

Depending on the type, capacity, efficiency and cycle setting of your washing machine, it can cost anywhere from 5 cents to 67 cents per load of washing. This estimation assumes an electricity usage rate of 27.5/kWh and a gas usage rate of 2.07/MJ (for homes with gas heaters).

The table below shows that warm water washes use considerably more electricity than cold water washes. This is especially the case for washing machines that heat the water internally, rather than drawing it from a hot water system.

How important are energy rating labels?

Energy rating labels are a useful indicator as to the costs of using certain large appliances. The more stars a model has, the cheaper it is to run. In fact, the energy rating website claims that each star represents a 27 per cent cut in the running costs.

You will also notice that washing machines have a ‘water rating’ label. Each half-star represents 10 litres of water savings on a regular load, so once again, the more stars a washing machine has, the less water it uses. The amount of water used in each wash will vary with the washer capacity as well as the wash setting. Assuming a relatively standard rate ($2.20/KL), water will cost 0.2 cents per litre.

The below table sourced from Sustainability Victoria represents the estimated annual energy costs based on three loads of washing per week. Bear in mind, while these calculations include the cost of heating water, it does not include the cost of water itself. To work out how much your washing machine is costing you in water, multiply your usage rate per litre (e.g. 0.2c/L) by the number of litres used on your preferred cycle. This will usually cost an additional 8 to 20 cents per load.

How to calculate the cost of washing

The table above solved the annual cost of a washing machine when we assume it was used six times per week. Of course, some households use their washing machine more, and some less. Here is how you can approximately calculate how much your washing machine might be costing you in your own circumstances.

The energy rating label on washing machines includes two numbers: one is for annual electricity usage (in kWh) for cold washes, the other for warm washes. The label assumes that a washing machine is used on regular settings, seven times per week. To work out the electricity cost of your washing machine per load, divide the number on the label by 365, and then multiply this kWh figure by your electricity usage rate. The water costs can also be worked out in a similar way as mentioned earlier. Refer to the below illustration. 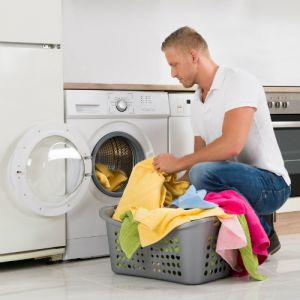 Garry is a stay-at-home dad with a wife and three children. Garry is responsible for doing the laundry, which amounts to five loads of washing per week.

Garry reads the energy rating label on their front loader washing machine and sees that it uses 420kWh per year on warm wash when it is used for seven loads per week – but Garry wants to know the cost of five loads per week.

To work out how much electricity this washing machine uses per wash, Garry divides the annual usage figure on the label by the number of washes it describes. Seven washes per week would mean the machine is used approximately 365 times per year. 420kWh divided by 365 is equal 1.15kWh.

This household has an electricity usage rate of 27.5c/kWh. Multiplying this rate by the number of kWh used per load produces the electricity cost per load. In this case, 27.5c/kWh x 1.15kWh = 31.625c.

Since Garry does five loads each week, the washing machine is adding $1.58/week or $20.56/quarter to the electricity bill.

Garry and his family live in South Sydney where water usage rates are $2.276 per kilolitre/0.23c per litre. The water ratings label says this washing machine uses 60L in a regular wash. That costs Garry 13.8c in water charges per load (60L x 0.23c/L) or 69c per week for 5 washes.

How to reduce the cost of washing

Now that you know how much you might be spending on your washing machine, your next question is probably how you can cut these costs. Here are some simple tips:

Do energy efficient washing machines save you money?

It depends. Energy efficient washing machines will almost always have lower running costs than their inefficient counterparts, however they’re also usually more expensive to purchase in the first place.

In an earlier analysis by Canstar Blue, we sampled select washing machines of various energy ratings and found that the potential savings are rather circumstantial and might come down to personal preference of whether you would prefer to save money now or in the future.

For those still a little unclear, check out our energy ratings guide. 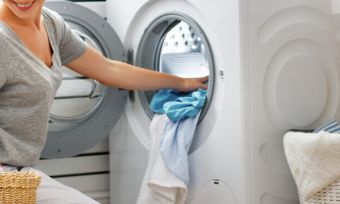 Everything you need to know about twin tub washing machines