There’s a reason why we describe really great stuff as ‘the best thing since sliced bread’. Almost everyone likes bread, and many eat it regularly. But ‘bread’ doesn’t mean the same thing in every place and every culture. Diverse breadmaking methods and ingredients mean there’s a whole world of different breads to explore.

We couldn’t possibly list every single type of bread in the world here, but we do cover the most popular in Australia. There may be a few you haven’t heard of before, or never thought to consider as an option. This can be a great opportunity to broaden your horizons or at least learn a little bit more about what makes bread so diverse.

Let’s explore some of Australia’s favourite kinds of breads, by region of origin. 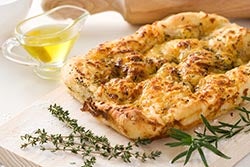 A flat Italian bread similar to pizza dough, but rises higher due to a greater yeast content, Foccacia contains quite a bit of olive oil. It’s typically eaten as a side or sandwich bread, often with olive oil, salt, and herbs.

This truly ancient bread is created by fermenting dough using naturally occurring lactobacilli culture and yeast. The method has been traced back to the very beginning of agriculture thousands of years ago. Sourdough retains a mildly sour taste, and keeps better than other kinds of bread.

A recent Italian bread invention, made in response to the rise in popularity of French baguettes, ciabatta is an elongated, broad and flat loaf. There are many different varieties of ciabatta, ranging from a dense to a porous crumb and soft to crunchy crust. It’s quite popular in Australia due to our large Italian Australian population. A Panini is a toasted sandwich made from ciabatta bread. 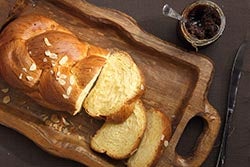 Rising in popularity as a burger bun, brioche is a rich French bread made using butter and eggs. The greater the butter-to-flour ratio of a brioche dough, the more the resulting bread tastes like a pastry or cake. Brioche for use in burgers tends to have a lower butter content, while the more traditional buttery type is used for desserts.

As the name suggests, these round yeast breads are from the UK. Each cornmeal-dusted round is split into two, toasted, and buttered to eat usually for breakfast. They’re also frequently eaten with fillings as a type of breakfast sandwich.

These round, flat spongy cakes from the UK are cooked on a griddle and typically eaten with a spread as a breakfast food. The big pores on the top readily soak up spreads such as butter, jam, honey, or yeast extract. 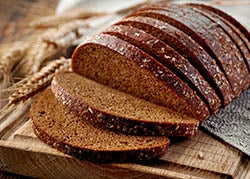 A staple from the Middle Ages, rye bread is made from rye grain to create a denser and often darker bread compared to wheat types. Rye is higher in fibre and has a stronger flavour than white bread. Rye bread is usually made using the sourdough method and, where made of pure rye, can keep for a very long time. It’s also quite common to find bread made of a mix of rye and other types of grains.

Instead of yeast, sodium bicarbonate (baking soda) is used as a leavening agent to create soda bread. This makes it a ‘quick bread’ in that it doesn’t require the time for the dough to be left to rise as in yeast doughs. The traditional ingredients of soda bread are flour, bread soda, salt, and buttermilk. The lactic acid in the buttermilk reacts with the bread soda to form carbon dioxide bubbles which makes the bread rise. It’s particularly popular in Ireland and Scotland, and is a traditional part of Serbian cuisine.

This Austrian bread is made using a particular method which creates a slightly chewy crust and a denser crumb. The dough is ‘enriched’ with the addition of sugar, malt powder, butter, and egg. It’s then baked in an oven which retains and adds steam to maximise moisture. The resulting loaf has a slightly tangy taste and unique texture. 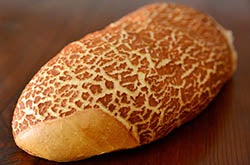 Popular in the Netherlands, tiger bread is distinctive for its mottled crust. The bread itself is made with sesame oil which gives a distinct aroma. The unique crust is created by painting rice paste onto the surface of the dough prior to baking. The rice paste dries and cracks to add texture and flavour to the loaf. While the tiger bread method is usually applied to soft white bread, it can be used with many different types of bread.

These ring-shaped breads aren’t quite as popular in Australia as they are in the US. Bagels originated from Jewish communities in Poland, and remain very popular across the world in places where there are high Jewish populations and connections to Jewish culture and history. Bagels are dense and chewy, often topped with sesame or poppy seeds baked into the surface. They’re usually eaten sliced and toasted with a spread or topping, or used as a sandwich bun. 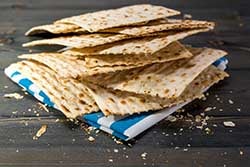 A Jewish unleavened flatbread, matzo is an integral part of the Passover festival. Passover matzo has significant religious and historical meaning, and as such must be made of one of the five grains specified under Jewish law – wheat, barley, spelt, rye, or oat. The oat type is usually available for those who can’t have gluten. Alternative recipes beyond the core flour and water recipe are available, but are not used for Passover. Matzo is eaten as is, or used as an ingredient in recipes such as matzo balls.

Is bread good for you? 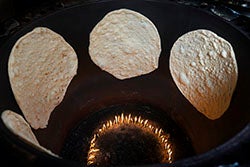 An unleavened flatbread eaten either as a soft wrap or as a dried brittle cracker, lavash is made of flour, water and salt rolled out flat and slapped against hot clay oven walls. Lavash is a traditional food in Armenia, Azerbaijan, Turkey, and Iran. Dried lavash is commonly used as a way to store bread for the long term – it can be rehydrated by sprinkling it with water.

Also known as Arabic bread, Lebanese bread, or Syrian bread, these flatbreads are popular thanks to their unique pocket shape. The slightly leavened wheat-flour dough is rolled out into flat rounds and baked at high temperatures, causing the dough to puff up in layers. After removing the rounds from the oven, the dough deflates but retains separate layers inside. The most common ways to eat pita breads are as a wrap or cut in half and filled.

Sometimes considered a type of pita, Turkish bread is generally more like the pocket-less type of pita. The broad, round flat breads are made from a wheat dough which is more leavened than pita bread. Turkish bread is commonly eaten sliced and dipped into food such as hummus, as a base for toppings, or as a sandwich. 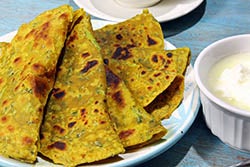 A flat yeast-leavened bread from Central and South Asia, naan is traditionally cooked in a tandoor (cylindrical oven). The dough is generally made from white flour, salt, yeast culture, and yoghurt. It’s served hot, to scoop food or eat by itself, plain with ghee or with toppings added such as cheese or garlic. Naan is also served as a wrap or stuffed with filling.

An unleavened flatbread made from wholemeal flour, roti is used for all kinds of dishes (both sweet and savoury) across Asia. Roti is cooked on a flat or slightly concave griddle and eaten as part of a meal, often as a scoop for food. 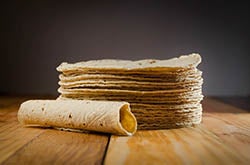 A thin unleavened flatbread, tortillas are traditionally made from finely ground maize (corn) but now many are made from wheat. Tortillas are eaten daily in Mexico and are a key ingredient in all kinds of Latin American dishes including tacos, enchiladas, quesadillas, and tostadas. Mexican burritos are usually made with wheat flour tortillas rather than corn types. Corn chips (aka tortilla chips) are made from baked pieces of tortilla.

Have we covered your favourite bread? There are so many different kinds of breads with so many different varieties across the world’s cultures that we could only ever scratch the surface of the wonderful world of bread.

Changing up the types of bread you eat can be an easy way to get more variety in your diet without having to reinvent the wheel. You may even find a new favourite! 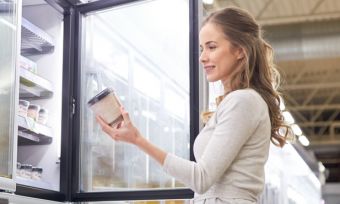 Our survey bursts the bubble on Australia’s favourite gum