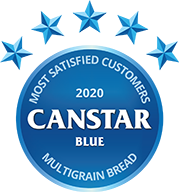 While white and wholemeal breads may satisfy your ‘kneads’, the multigrain kind has just the rye grainy texture to make your sandwich the best thing since sliced bread. Multigrain bread may cost more than your traditional loaf, whether it’s a supermarket private label or one of the big-name brands, but the popularity of multigrain bread is certainly on a roll.

To help you suss out the best bread on the shelf, Canstar Blue surveyed over 500 shoppers for feedback on the multigrain bread they ‘loaf’ most. Consumers were asked to review and rate the multigrain bread they have purchased from a supermarket or grocer and enjoyed (or otherwise) in the last three months. Brands (which received a minimum of 30 survey responses) were then scored on important factors like freshness, taste, texture, variety, value for money and overall satisfaction. So, who rose to the top, and who crumbled?

In our 2020 multigrain bread review, five brands featured, but only one achieved a five-star rating for overall satisfaction – Helga’s Continental Bakehouse. It earned the number one spot in every category except value for money where it got three stars.

Here are the best brands for multigrain bread in Australia, as rated by consumers in Canstar Blue’s latest review:

Helga’s Continental Bakehouse was clearly what Aussies kneaded. It scored five stars in most categories, including freshness and overall satisfaction, but slumped slightly in the value for money category where it got three stars. Woolworths, Coles and Abbott’s Village Bakery followed closely behind on four stars, while Tip Top rounded out the results on three stars.

Other brands also got a taste of the top, with Woolworths and Coles being the only two brands to beat this year’s winner, both scoring five stars for value for money. Abbott’s Village Bakery scored similarly on taste and texture.

Woolworths offers a wide selection of packaged bread in its stores, with different types available such as White Soft, Super Soft, Country Loaf and a regular supermarket-branded range of loaves. Prices typically vary between $2 and $3 for a loaf. 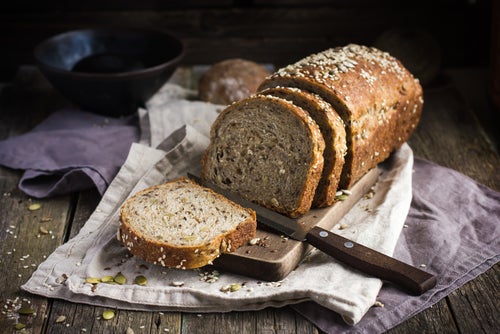 Which multigrain bread should I buy?

Over a third of our survey respondents (36%) believe that premium brands taste better than private labels. Our survey shows texture was the biggest driver of satisfaction, followed by taste and value for money. If you’re after a healthier alternative, 42% of people admitted to switching white bread for multigrain or wholegrain as part of a health kick.

Multigrain bread contains more than one type of grain and seeds. It’s usually low GI and can have up to four times the amount of fiber than normal white bread. Ideally, look for multigrain bread products with whole ingredients like ‘whole wheat’ and ‘whole grain’. Check out the nutrition information panel for different breads and look for options that are low-carb, but are high in fiber and protein, which prolongs energy release. It will make your sandwich keep you fuller for longer.

The rest will simply come down to what you like and how you break bread. Do you use bread mostly for sandwiches and toast in the morning? Either way, over a third of survey respondents (37%) said they prefer ‘thick’ sliced bread over thinner varieties.

What is the best multigrain bread?

Canstar Blue surveyed more than 3,000 Australian adults across a range of categories to measure and track customer satisfaction, via ISO 26362 accredited research panels managed by Qualtrics. The outcomes reported are the results from customers within the survey group who have purchased and eaten packaged multigrain bread from a supermarket or grocer (i.e. not freshly baked from a bakery) within the last three months – in this case, 515 people.

A handful of nuts might just be what the doctor ordered, according to a new study.

Eating nuts regularly could prevent the development of heart failure and an irregular heartbeat.

A study conducted by scientists from Sweden, …