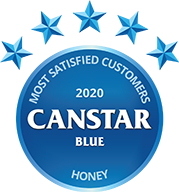 Bramwells was rated the bee’s knees in our inaugural honey review, scoring five stars for overall satisfaction, as well as taste, consistency, value for money and packaging functionality and appeal. It also rated three stars for variety/range.

Winnie the Pooh isn’t the only one busy dipping his paws into the honeypot. Our latest survey results found that 62% of Aussies (who buy honey) add it to their breakfast, while one in three (35%) add a jar or bottle of the sweet stuff to their shopping trolley regularly. What’s more, about one in ten respondents admitted to considering getting their own beehive! Un-bee-lievable!”

But, don’t worry if you’re struggling to choose the best honey to drizzle over your pancakes, sweeten your tea, or use as part of your skincare routine. We know that honey is serious bizzz-ness, just ask the 54% of survey respondents who said they’ve tried multiple brands to find one they love!

Canstar Blue surveyed more than 1,400 adults on the brands of honey they’ve purchased and consumed from a supermarket or grocer in the last three months. Respondents were asked to rate their brand of choice on various factors, including variety & range, taste, consistency, packaging functionality, packaging appeal, value for money and overall satisfaction. So, which brand of honey is hitting the sweet spot among Aussies?

In our first ever honey review, five brands were rated but only one scored a five-star rating for overall satisfaction — Bramwells. The brand from ALDI is clearly oozing with popularity in Australia, receiving the only five-star rating in most categories — consistency, value for money, packaging functionality and overall satisfaction. It also achieved the top score when it came to taste and packaging appeal, although it got three stars for variety/range. 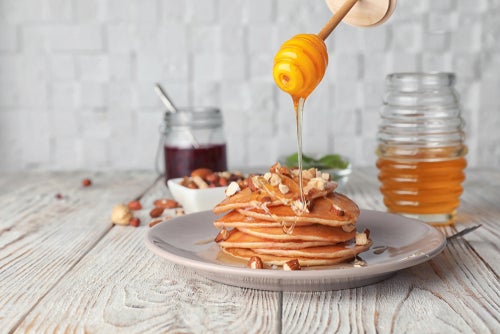 Here are the best brands for honey in Australia, as rated by consumers in Canstar Blue’s latest review:

Bramwells performed unbee-lievably well in Canstar Blue’s first ever honey review, achieving an impressive five-star rating for overall satisfaction and most other categories. The brand unfortunately landed on a slightly more sour note when it came to variety/range, where it scored three stars, with Beechworth getting top marks and beating this year’s winner in the category. For overall satisfaction, Beechworth and Capilano rated four stars while Woolworths and Coles sat on three. Read on to find more about the brands compared.

In addition to small kitchen appliances like toasters and kettles, ALDI also has its own range of honey to add to your list of breakfast essentials. Under the Bramwells brand, the German discount supermarket sells both Manuka honey and pure Australian honey. Its products are claimed to not contain artificial colours or flavours and preservatives.

Beechworth claims to have a flavour to suit all taste buds and even describes its Classic Beechworth Honey range as a ‘great all-rounder honey’ for enjoying straight of the jar or for cooking. Prices start from $4.95 for a 275g squeeze bottle and can reach up to $35 for a 3kg tub.

For something more unique, Beechworth’s Australian Specialty Honey line offers honey as either bottled raw, mixed with ‘feature ingredients’, or whipped into a creamy consistency. These bottles usually cost between $6.50-$19.50. Beechworth’s Australian Varietal Honey line similarly provides limited-edition products depending on the seasonality of particular trees throughout the year. At the time of writing, some of the options include the Bee Warm Almond Honey and Be Fruity Orange Blossom Honey. These come in 350g or 1.5kg jars, costing between $7.50-$24.50.

Besides not adding preservatives or additives to its products, Beechworth says it also takes pride in only harvesting honey from Australian apiaries. So then, it makes sense why Beechworth has created the Bee Cause Honey range which uses premium and pure Australian varietal honeys collected from beekeepers from specific regions.

Claiming to be Australia’s favourite honey brand, Capilano has produced honey for more than 65 years and launched the Capilano’s Keeping Futures Program to support budding beekeepers, bee scientists as well as the education of school children. Its range of amber products include classic honey, floral honey, manuka honey, raw honey and organic honey. Capilano also created the Disaster Relief line of products in response to the 2020 Australian bushfires, donating a portion of its proceeds to Rural Aid’s Hive Aid campaign.

The various jar, squeeze and twist options usually cost between $4.70 and $30. But the Classic Honey range, which is said to use 100% Australian pure honey, is generally priced under $9, while the Manuka selection can set you back at least $18 for a 250g jar.

Of course, ALDI isn’t the only supermarket giant to release its own range of honey. Prices from the ‘fresh food people’ start from $5.30 for the 375g Woolworths Honey (Twist and Squeeze), and can fetch up to $11.50 for a 1kg pail of pure honey. Other products include the Woolworths Pure Australian Honey Jar and the Woolworths Pure Blend Honey, with both items weighing 500g and available for less than $6.

Other products include the Coles Australian Red Gum Honey, Coles New South Wales Snow Gum Honey and the Coles Queensland Macadamia Honey, each coming in a 400g jar and selling for $6.50.

Which honey should I buy?

What makes honey the bees’ knees? According to our survey, taste was the biggest driver of customer satisfaction, followed by consistency and value for money. And despite the deliciously sweet bite honey is known for, 20% of respondents said nothing tickles their taste buds better than a natural raw honey. Nearly one in five people also said they read the nutritional information on the labels. Although price is still a pretty important factor for many consumers, with one in four (25%) Australians generally picking the cheapest brand or opting for one on special.

Whichever brand, flavour and type of honey you end up putting in your shopping trolley, the decision will ultimately come down to your personal preference – and budget. You can pick up a jar of honey for less than $5, or spend as much as $30 – or more. It really comes down to how seriously you take your honey.

What is the best honey?

Canstar Blue surveyed more than 3,000 Australian adults across a range of categories to measure and track customer satisfaction, via ISO 26362 accredited research panels managed by Qualtrics. The outcomes reported are the results from customers within the survey group who have purchased and eaten honey from a supermarket or grocer (i.e. not homemade or purchased from a market) in the last three months – in this case, 1,484 people.