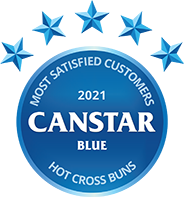 Where can you find the best hot cross buns in 2021?

There’s almost nothing that compares to the sweetly spiced aroma of hot cross buns toasting away in the morning. And whether you agree with supermarkets selling them all year round, which is the case for some retailers like Coles, nothing says Easter like a hot cross bun smothered in your favourite butter or margarine. As the supermarkets point out, many Aussies love buying their buns months ahead of the Easter holidays, giving consumers plenty of time to decide which chain bakes the best. Therefore, we at Canstar Blue thought it was about time to test Australia’s tastebuds to find out which supermarket chain is deemed to offer the best hot cross in 2021.

To do so, we surveyed more than 1,700 consumers who have purchased and eaten supermarket-branded hot cross buns in the lead-up to Easter, with brands compared on taste, value for money, freshness and variety, as well as overall satisfaction. Brands that received at least 30 responses are featured in our ratings.

So, what did we find? Coles continues to butter up Aussies with its range of hot cross buns, rating best overall for the second year in a row. It whipped up five stars for freshness, taste, variety and overall satisfaction. 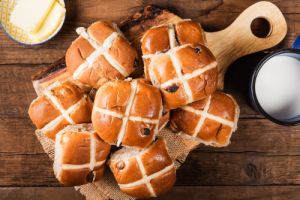 Here are the best supermarket brands for hot cross buns in Australia, as rated by consumers in Canstar Blue’s 2021 review:

Although when it comes to freshness, it seems Aussies are the true winners. Three out of four supermarket chains scored full marks for the category, including Coles, ALDI, and Woolworths. ALDI similarly achieved a five-star review for value for money, with Woolworths also receiving the same result for variety.

About the Winner ─ Coles

Coles is hopping its way into Aussies’ stomachs, armed with a basket full of traditional hot cross buns, as well as apple & cinnamon and chocolate varieties. These are available in a six-pack and usually on sale for $3.50 each. And if you’ve planned a date with Netflix this Easter, you can even get hot cross bun flavoured popcorn for $2.20.

We like big (hot cross) buns and we cannot lie, but which flavour is Australia’s favourite? Here’s what our survey respondents picked:

While there’s plenty of new and exciting flavours that supermarkets are trying out, it seems nothing can beat the classic. Here are some other fun facts we found out.

Are hot cross buns sold too early in supermarkets?

It’s the annual debate between shoppers when some say it’s too early for supermarkets to start selling hot cross buns in December and January (months before Easter, even from Boxing Day!) and others hit the stores as soon as they’re available. Our survey found:

This controversy also appears to divide the generations. Two in five respondents (44%) aged over 60 believe that supermarkets sell hot cross buns too early in the year, while only 25% of younger Aussies (aged 18 to 29) agree with that sentiment. However, nearly half (49%) of young respondents aged under 30 said supermarkets should make hot cross buns available all year round.

Canstar Blue surveyed more than 3,000 Australian adults across a range of categories to measure and track customer satisfaction, via ISO 26362 accredited research panels managed by Qualtrics. The outcomes reported are the results from customers within the survey group who have purchased and eaten supermarket branded hot cross buns in the last three months, in this case, 1,729 people.