Advertisement
Advertisement
Australia has the highest rate of Solar PV penetration in the world, with 15% of homes now installed with solar panels – twice as many as the next country, Belgium (7.5%). That’s right, Belgium. According to the Climate Council’s most recent report, some suburbs of Australia have reached solar penetrations of up to 65%, or ‘as common as insulation’.

Queensland has the greatest share of solar installations, with 31%. Trailing behind are the more populated states of New South Wales (22%) and Victoria (18%).

However, it’s a slightly different story when we look at the proportion of homes with roof top solar by state. Queensland (29.6%) and South Australia (28.8%) have the highest penetration of rooftop PV solar by population – fast approaching a third of homes with solar installations. This is far ahead of Western Australia which is the next closest state at 22.5%. A few states are lagging behind in rooftop PV solar, but this is generally compensated for with other large scale renewable energy generation, such as hydro and wind energy. 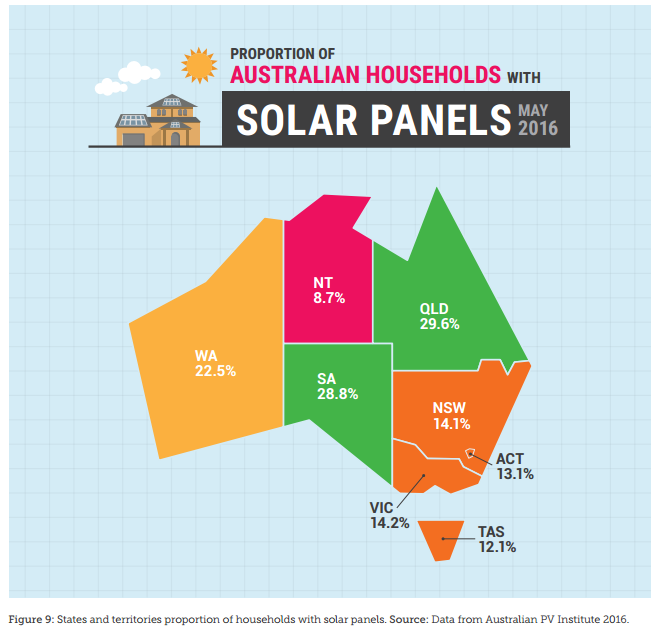 Solar PV is much more prevalent in some areas, with 14 suburbs now recording roof top solar penetration of 50% or more. Angle Vale in South Australia as well as Leinster and Sir Samuel in Western Australia are the front runners with 65% of households going solar, closely followed by The Ponds in New South Wales (64%). 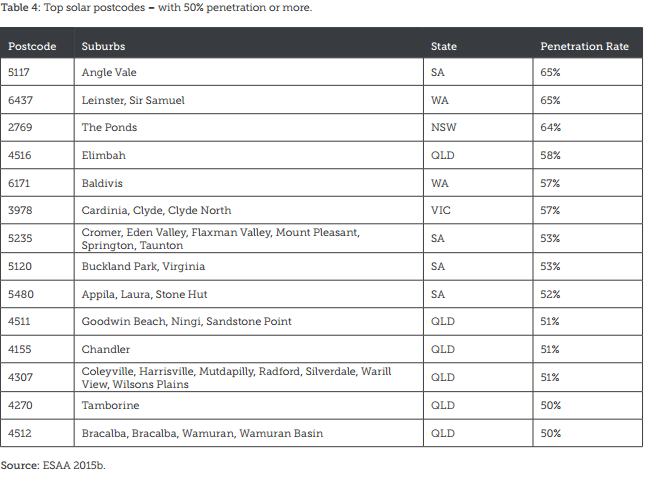 Most of the listed suburbs were recorded as having low to medium incomes and are generally located in outer metropolitan and rural areas. The Climate Council report claims that key factors which encourage high solar penetration include levels of home ownership, building sustainability and energy bills as a proportion of household income.

The Climate Council says it expects Australia will see suburbs with 100% solar penetration in the near future, as solar’s growing popularity has seen it become an expectation in new homes rather than a luxury. Denman Prospect in Canberra has introduced a requirement of 3kW of solar PV in every house. Meanwhile new defence houses constructed in the Northern Territory are now designed to include a 4.5kW solar system and electric vehicle charging points in every house.

While the earlier mentioned suburbs have the highest penetration of roof top solar, this doesn’t necessarily equate to having the most solar systems installed. Using data from the Clean Energy Regulator, the suburbs with the highest number of roof top PV installations are as follows:

Figures are from data collected by the Clean Energy Regulator. This data only includes installations made from 2001 to April 2016.