Petrol is the life blood of your car, allowing your engine to run optimally whether you’re trundling down to the shops or you’re heading off on a once-in-a-lifetime roadtrip. But when it comes to filling up at the petrol station, the amount of options available may give some motorists cause for concern, particularly if you’re driving a new car, or just new to driving!

So when it comes to petrol, is there actually a difference between each option, and which petrol should you be using? Find out with this Canstar Blue guide. 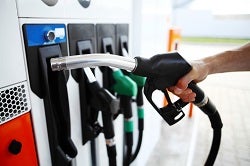 You’ll also see diesel at petrol stations, which is for a different engine type altogether, so if you’re running a petrol engine, stay away from the diesel pump!

What’s the difference between fuel types?

The difference between each fuel type is their ‘octane rating’, or the numbers that identify them, such as 91, 95 or 98. The octane rating is an index of a fuel’s heat resistance, which means the fuel’s ability to resist premature burning, which can cause your engine to ‘knock’. Fuels with higher octane ratings can allow engines to run at higher compression levels, which can then create more power – which is why performance vehicles generally only run on premium or higher octane fuels.

Can I use a higher octane fuel in my car?

You can technically use a higher octane fuel in your car, although you’ll likely experience minimal, if any, difference in performance. Higher octane fuels are designed to work with specific types of engines, so an engine that traditionally runs on 91 octane fuel won’t get the additional benefits 98 octane fuel usually gives, and considering the price difference between 91 and 98 fuel, the only difference it may make will be on your wallet.

Can I use a lower octane fuel in my car?

It’s not recommended to use a lower octane fuel for your car, as you may experience a drop in performance and fuel economy, and potentially even damage the engine. This is due to the fuel not properly combusting when it should, which throws off the timing in the engine, and causing it to ‘knock’ or ‘ping’. As a result, it’s best to just stick to what the manufacturer recommends for your engine to get the best results.

What happens if I put the wrong fuel in my car?

If you’ve just filled up the tank at the petrol station and realised you’ve put the wrong fuel in, the first thing to do is avoid turning on your engine and call a mechanic or your car manufacturer’s helpline. Running the engine with the wrong fuel can cause it to knock or ping, which can potentially damage the fuel lines and engine itself, meaning it’s best to avoid driving as much as possible until you’ve drained the fuel. Check out our article on what to do if you’ve put the wrong fuel in your car.

Which petrol should I use?

What petrol you should use is entirely dependent on what you’re driving, as certain engines will only run on certain petrol types. Checking the owner’s manual or on the inside of the fuel cap should give you the answer, and you’ll want to make sure you’re putting the right stuff in, as putting in the wrong petrol type can lead to engine damage and even potentially writing your car off. So while opting for a lower octane fuel because of a cheaper price may be awfully tempting, it’s not worth the potential damage to your engine, so stick to what your car prefers to avoid any false starts getting back on the road.