Two of something is usually better than one and it’s no different with SIM cards. Dual SIM phones are the unsung heroes of the smartphone world, largely flying under the radar. In this review, we’ll run through the benefits and perils of dual SIM smartphones, some models available in Australia and how you can buy one.

There are quite a few smartphones in Australia with dual-SIM capability – OPPO seems to be the manufacturer leading the way with several of its newer smartphones featuring dual-SIM capabilities. Some dual SIM devices might be available to purchase outright only, while others might be available to be bundled in with a phone plan. Make sure you check the specifications before buying, and also note that if buying through a phone plan provider, you might find that the dual SIM function is disabled.

Some of the biggest phone releases of 2019 include dual SIM capabilities, however these versions might not be available in Australia, or may only be available to purchase outright. Sometimes dual-SIM functions are also be disabled or it may be unclear whether a telco is stocking a dual-SIM version of the device. Some telcos are more up front about this, so you’ll know whether your device is dual-SIM capable or not.

Optus currently promotes both the Huawei P30 and P30 Pro devices as being dual-SIM phones, as does TeleChoice, while Woolworths Mobile has a range of three OPPO phones, including the newest Reno 10x Zoom, which are all listed as dual SIM. While Telstra and Vodafone both carry some of these same devices, it’s a bit harder to tell whether these are dual-SIM devices or if the function is disabled — chatting to the respective telco might help to clear this up.

If you’re interested in the OPPO Reno Z or the Huawei P30 Pro, there are several telcos which offer these devices. The following table shows a range of OPPO Reno Z and Huawei P30 Pro plans from Canstar Blue’s database, listed in order of cost, from the lowest to highest and then by data allowance, largest to smallest. This is a selection of products including links to our referral partners.

There are several smartphones available in Australia (either on a plan or to buy outright) that include dual SIM capability. They include:

How do dual SIM phones work? 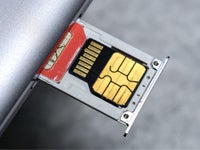 You may know they exist, but how do dual SIM smartphones actually work? Simply put, they can take two SIM cards at once. Most models are only ‘single configuration’ meaning you can only use one SIM card at once and have to switch to the other SIM in your phone’s settings. This means that if someone is trying to reach you on your other SIM card while it’s not in use, they won’t be able to – similar to having your phone switched off. This could be bad news for anyone who needs to be contactable at all hours.

Many dual SIM smartphones have the primary SIM slot, and a hybrid slot – one able to be used for a second SIM or a micro SD card, but not both. Currently mainstream phones such as iPhone and Samsung Galaxy phones do not sport dual SIM functionality. So how could you put a dual SIM phone to good use, and what are some drawbacks of such phones?

There are many benefits and potential uses for a dual SIM smartphone, such as:

However, dual SIM cards are not without their downsides. Very few phones, and next to none in Australia, are ‘dual active’, meaning two SIMs are able to be used at once. This means you have to manually switch between the two SIM cards in your phone’s settings. And in all likelihood this also means you’ll be subject to paying two phone bills, unless one of these bills is paid for by your employer.

Phone plans to use with dual SIM phones

As long as your smartphone is unlocked, you can use whatever SIM only plan you wish. Keep in mind that the secondary SIM slot may only be 3G compatible, but there are several 3G-only plans out there that offer lots of data for comparatively low prices.

When you’re looking for a SIM-only plan, there are a few things to consider. Do you want prepaid or postpaid, are you happy to be on a contract or do you prefer the freedom of a month-to-month plan, plus, how much data do you need and how much are you willing to pay?

If you’re interested in a postpaid SIM-only plan to use with your dual SIM phone, the table below shows a selection of postpaid plans from Canstar Blue’s database which show a minimum of 10GB data, listed in order of advertised cost, lowest cost first, then by data allowance. Use our comparison tool to see a wider range of plans from other providers. These are products with links to referral partners.

Is a dual SIM phone worth the switch?

You may not have considered a dual SIM smartphone before, but if you have two phones – one for personal use and one for work – or you travel around a lot, it could be your new best friend. They allow great flexibility and you can also get the most out of having two phone plans, whether that’s a plan with cheap or unlimited international calls and another with lots of data.

They allow you to switch off your work phone after a long day and still retain the ability to text friends and family. However, dual SIM phones aren’t without their downsides. The major one being that one SIM tray might be 3G only and two plans cannot be used at once. Not many phones currently have dual SIM capability, and you are limited to a few Android OS models from the likes of OPPO, Motorola and Huawei. You may also have to purchase outright as bundling with a plan could be limited.

Dual SIM phones are a great idea, but are not without their downfalls – these may be enough to still warrant the use of two handsets instead of one. In any case, it pays to shop around and consider your own needs first.