The best-rated universities in Victoria

Besides being home to Melbourne, often described as Australia’s cultural capital, and the famous Goulburn Valley, the state of Victoria also has more than 50 university campuses across its metro areas and regional centres. Universities in Victoria have a strong academic reputation and are often ranked highly in various rankings of graduate outcomes and student experience.

With more than half of students surveyed by Canstar Blue (64%) acknowledging that their university degree was vital for their future career prospects and 51% also saying that university was the best time of their life from a social perspective, making the right decision on which university to attend is clearly important.

That’s why Canstar Blue surveyed more than 490 current students and graduates of the past 10 years to find which universities they rated the best in Victoria. There are many university ratings out there, but we wanted to take a different approach by asking students to rate their university on a range of factors that were important to them, including how satisfied they were overall with their experience.

So, which are the highest-rated universities in Victoria for student satisfaction?

Which VIC universities were included in our 2021 ratings?

Here are the universities in Victoria that were included in Canstar Blue’s 2021 student satisfaction survey, listed below in alphabetical order. 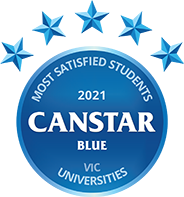 Our ratings saw several other universities receive five-star ratings, including the University of Melbourne for career opportunities and prospects after graduation and its campus amenities. RMIT University received five stars for social aspects, as did the Swinburne University of Technology for student support available.

What is Deakin University known for?

Deakin University is one of the largest universities in Australia by student population and boasts some of the best facilities and technology, as well as research, learning and work placement programs in Australia and overseas. The public university has campuses in Melbourne, Geelong and Warrnambool, as well as an online ‘Cloud Campus’.

Deakin University has a string of accolades under its belt. It previously placed in the top 1% of universities globally in the Academic Ranking of World Universities (ARWU) and for its arts and humanities subjects, communication and media studies, computer science and information systems, to name just a few, in the 2021 QS World University Rankings by Subject. Deakin University has also been chosen as the number one university in Victoria in the Graduate Outcomes Survey by Quality Indicators for Learning and Teaching (QILT). In 2020, the Student Experience Survey, conducted by QILT for the Australian Government Department of Education, Skills and Employment, rated Deakin University number one for student experience, student support and teaching quality.

Deakin University offers online units and courses through its Cloud Campus. The platform allows students to study online undergraduate and postgraduate courses, watch lectures, submit assessments, participate in discussions online and set up meetings in real time with their peers and teaching staff. The Cloud Campus also has 24/7 access to Deakin University’s online library, lectures and presentations, and IT assistance with Australia’s top-rated tech support, according to the Voice Project IT Service Quality Support Benchmark Survey.

Deakin University also offers DeakinSync, a personalised dashboard for students to access their study units, learning resources, the library, timetables, university news and events, campus maps and other relevant information. DeakinSync can be connected to via smartphones or tablets.

How many universities are there in Victoria?

There are nine public universities in Victoria, many of which have campuses in Melbourne metro as well as in regional centres to provide physical access to university education to remote populations. Several of these institutions, including Deakin University, the University of Melbourne, RMIT University and Monash University, have also appeared in well-known world university rankings, including the QS World University Rankings and the ARWU. Victoria also has several tertiary education providers such as Technical and Further Education (TAFE) and vocational education and training providers.

Whichever university you may pick will likely depend on your study discipline. For example, Monash University is best known for its social sciences, humanities and arts programs and the Monash Law Faculty is one of the largest and most dynamic law schools in Australia. Meanwhile, the University of Melbourne is popular for its business, commerce, finance and specialised science degrees.

What is the best-rated university in Melbourne?

Just remember, though, that these institutions form part of a bigger university network in Melbourne and Victoria, so be sure to check out how other universities rank in terms of education excellence, graduate outcomes and student experience. Some world rankings to look at include the QS World University Rankings, the ARWU and the THE.